The Indigenous Guard of Colombia

An article from 2008 on the  Indigenous Guard, an organized self-defense group used by Indigenous communities in Colombia.

Members of the Indigenous Guard displaying their batons, symbols of their membership in the group.

Colombia: Indigenous Self Defense in Times of War

by Raúl Zibechi, 05/06/2008,  the Americas Program of the Center for International Policy

The Cordillera Central is one of the prime regions torn by the war between the Colombian military and the FARC (Revolutionary Armed Forces of Colombia). The rural population, which is mostly lower class and of indigenous decent, and consequently the sector of the Colombian populous most dramatically hit by the armed confrontations, defends itself through the “Indigenous War.”

An enormous green desert. Leaving the Cali Airport, a sea of sugarcane plantations covers the extensive flats of Cauca, one of the most fertile regions of the Colombian countryside. Here, coffee cultivation has barely taken root, going back only two decades. Manuel Rozental, a doctor who has followed the activities and movements of the indigenous peoples of the North Cauca region for years, comments on the scenery from his seat at the back of the bus, remarking “It’s the agrofuels business.” Here, sugarcane trains stuffed to the brim cross all along the Pan-American route as they make their way to the refineries that border the track systems. As they go, they are met with the indifferent, and seemingly lost, gazes from rows of black countrymen, as they slowly saunter toward their poorly-constructed houses.

After an hour of travel, we reach Santander de Quilichao, a large rural town of about 70,000 inhabitants, the first city of Cauca to appear on the route. Here, the black population is the majority, mostly those emigrated or displaced by the war, and surviving on jobs within the sugarcane industry or local businesses.

The first sensation to hit is one of insecurity, possibly because of the disorder, and undoubtedly due to comments from those accompanying me, who haven’t stopped talking about how this region still belongs to the paramilitaries. Manuel gives his seat to a pair of indigenous guards that take his place in silence, holding their nightsticks that flaunt small multicolored strips.

Heading to the Cordillera

We depart from the city on route to the cordillera, and in no time at all the fields of crops disappear. Thick groups of trees mark the outskirts: the giant samanes, the tree of rain, with an extensive round canopy, large enough to cover a soccer field, flowering guayacan trees, monumental olive green ceiba trees, tulips and violet cherry blossoms, cachimbos, cambulos full of red buds, higuerones, and matapalos. Thin guadua trees, a species of bamboo highly valued by the locals, with round trunks and fine leaves, run rampant and cover the scene. From the highway shoulder rows of soldiers observe the passing vehicles.

The roar of the motor hints at its poor condition. The mountain crests rise above the clouds and thin fog, and below, the Palo River collects the waters from all over the mountain range. Only mountains can be seen, summit after summit, green walls adorned with streams of silver. The crops appear along the almost perpendicular slopes of the range. Banana trees protect the coffee trees from harsh equatorial sun, along with the subsistence crops, yucca, beans, and further up the mountain in the colder reaches, potato and corn. The area seems a true vernal mixture compared to the monotonous litany of the lowlands.

We arrive at a site called El Tierrero, the last city refuge of the indigenous Huellas-Caloto region. We veer to the left and leave the asphalt and continue on an irregular shaky bridge hanging from above. Swaying back and forth as we go, the car reaches El Damián, within the Tacueyan refuge. The first surprise: underneath the bananas, in place of coffee trees, we find large groves of coca, growing along the sunny slopes, at an altitude of more than 2,000 meters.

Since mid-March the FARC guerillas and the national army have engaged in combat on the top of the mountain. During these incursions the national forces blew up a storage facility storing large deposits of marijuana. The explosion killed an indigenous Nasa inhabitant, wounded 14 others, and toppled all of the houses within 100 meters. Since then the 800 inhabitants of the neighboring areas, El Damián and La María, have taken refuge in the local school, chosen to serve as the site of their “permanent assembly,” and a gathering point in case of emergency. Above the school, a giant white flag flies, tied to the end of a sugarcane stalk, in hopes that it will dissuade any armed assault by the combating forces. More than half are young children, the rest mothers and elderly. The men leave during the day to tend to the crops and chickens, trying to evade the combatants. The director, young and indecisive, is thankful for the visit and asks not to be recorded. Clothing barely hanging on to threads and mattresses lying on the hard floor have taken the places of the normal school apparel, desks and chairs. Although the Nasa people have filled the school facilities to the brim for a week, classrooms, bathrooms, and hallway all remain clean and tidy, denoting a strong-willed internal organization and order.

A write-up from the Association of Indigenous Cabildos of the North of Cauca declares that in case of emergency, the population is to go to their areas of permanent assembly, spaces of “indigenous resistance defined by the assembly as areas for protection, reflection, and community analysis.” The director adds that it is about resisting together, and about “respecting diversity and differences so that the land of the future can be a mix of collective consciences and autonomy in equilibrium and harmony with all.” 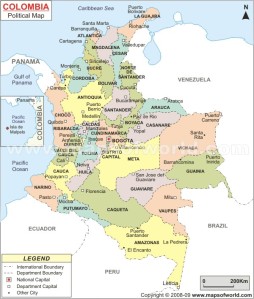 In 2004 the indigenous guard received the National Peace Prize, which is awarded each year by a group of institutions: The United Nations, the Ebert Foundation, and various media sources such as El Tiempo, Caracol Radio and Television, and Semana magazine. In effect, it has been one of the most original experiences ever to happen to any one social movement. “We are not an armed military force, nor guerillas; we are just a community in the service of the other communities,” says one guard, whole-heartedly taking to the idea that he is an instrument of defense for the territory. In this way, the concept of self defense of the different communities is key and promotes organization. Their resistance strategies include promoting food sovereignty, early warning systems, communal gardens, and above all, collective training processes such as those involving permanent assembly areas and the reinforcement of community-run authorities.

Luis Alberto Mensa, 42 years old, walks so slowly that he appears to glide over the earth. He carries a nightstick like all the other guards who accompany him, the only symbol to indicate his authority. However, he is the coordinator of all the indigenous guards in the region. He assures us that “the guard, which always existed within the Nasa community, became official in order to make itself visible in 2001 in response to a series of conflicts in 2001. The people did not believe that an armed conflict would reach this place because this was historically a FARC zone. However, the paramilitary did enter our region and killed many, so the assemblies decided to install permanent guards.”

The guard structure is very simple: each town elects, through assembly, 10 guards and one coordinator. Later, one coordinator is chosen for each refuge area and another for the entire region, always with the approval of the governors. The guards serve a two-year duty but many decide to continue. “In the entire North Cauca zone we have 3,500 guards distributed among the 18 cabildos. There are young people and women, ranging from 12 to 50 years of age. The training is the most important aspect and we do it through the discussion of human rights and our own native laws. We prioritize the policy formation over that of physical exercises. The guard is very important to the security of the population and it has become a problem for the armed attackers,” says Luis Alberto.

The events are obligatory and last three days. Lawyers, judges, and community leaders all take part and recount the history, uses, and costumes of the Nasa people. Later, each coordinator recreates these same activities and practices in his own town or province. One of the central aspects is the so-called, “derecho propio” or self-right—communal justice that defines the activity of the indigenous guard. “We have nothing to do with any sort of police. We are organization founders, and the community’s protection and the defense of life without involvement in the war.” However, both the militia leaders and the guerrillas are considered enemies as they make recruitment difficult and get in the way of military activity.

Floresmiro, 33 years old, is one of the coordinators of the 300 guards in the refuge of Tacueyó. “The guard service has been a school. As we live with the insurgency, at times the idea pops into your head to go with the guards and take up a rifle. Those who go do so because they like the arms and because they have problems with their parents, but those who join in the greatest numbers are the abandoned children. In the guerrilla forces, or in the army, they feel as though they have power and control.” Since participation in the guard is voluntary and not paid, the neighbors and the authorities of the provinces collaborate to help those absent by maintaining their crops and on occasion sowing seeds, and even harvesting. “Here the education is key. We work on the Nasa way and vision, which rejects violence. We defend ourselves by staying alert and with strong organization and we get in the way of the armed forces in groups so that they do not attack our community. We teach our people what they need to do in the case of an emergency and we call on our guards using our forms of broadcast, or cell phones, and mobilize the population with the radio. In just four hours we can gather together the 300 guards from my area.”

Luis Alberto has proposed a trip of about 100 meters to see the storage facility destroyed by the army. Some 40 guards march along a thick path. Along the way we find two “tatucos” that failed to explode. These are homemade grenades launched from a distance by the guerrilla forces, and guards with us decide to remove them and place them off the path and out of the reach of children. Upon arriving at the enormous hole left by the explosion we see three young guerrilla fighters appear from within the banana groves at about 100 meters away. The chief of the guard does not remain silent. “Where is the army?” “Over there,” one of them points with his nightstick toward the mountain crest. They observe each other, vigilantly, and every few days someone takes a shot, similarly as the indigenous guard passes between the two armies.

Close up of Indigenous Guard's baton.

“The Guard is more for the purpose of educating than for repressing and it helps in deterring the young from getting involved in the armed forces,” says Manuel Ul, the young coordinator of the Huellas guard unit. The young find themselves mesmerized, gazing into the crater left by the explosion that caused the confrontations in March. Slowly we begin to make our way toward the school where lunch waits for us. The mid-day heat transforms the relative calm into a rare placid sensation. Surrounded by indigenous guards, it is almost impossible not to feel a sense of security, isolated in this land.