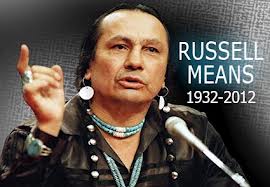 Greetings my relatives and friends

I wish I was there to talk with you in person and share with you the sorrow that I feel with the passing of Russell Means, my brother, my friend, and inspiration on many levels. Russell Means will always be an icon whenever the American Indian Movement is spoken of and whenever people talk about the changes that took place, the changes that are taking place now for Indian people.

One thing about Russell I always remembered, and I think someone else once said it, you may have loved him, or you may have disliked him, but you couldn’t ignore him. I’ll always remember when an elder said one time, I was at a ceremony and I asked what this half shaped moon circle on the ground meant, and he said it was a symbol of the circle of life, the never ending of the circle of life, and I said there is only half a circle, and he said the other half was unseen, it is the spirit world.   For Indian people it never ends, we don’t have a linear existence, so I know I will see Russell again, and I take comfort in that thought.  For men like Russell Means don’t come along in a lifetime very often.  He was truly an inspiration for all of us younger guys at the time.  He had good words to say, he was eloquent when he spoke them, and he spoke English as clearly and precisely and as articulate as any one I have ever heard speak.  And he knew what he was talking about.  And I know all of you out there, as well as myself, will always remember our friend, our brother and fellow activist, and how he stood with us to recapture the freedoms we’ve lost, and protect the ones that we still have, and bring about a better future for our people, and all people of this Mother Earth, who’s nature is in peril.

In the spirit of Crazy Horse, and Russell Means. 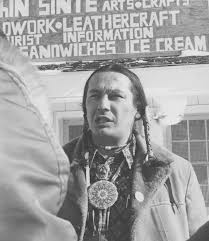 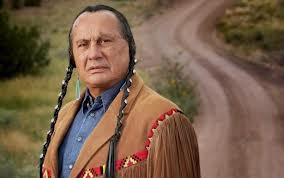 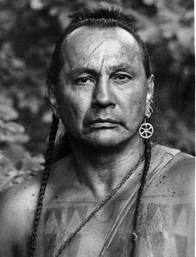 Russell Means starred in many Hollywood movies, including Last of the Mohicans.