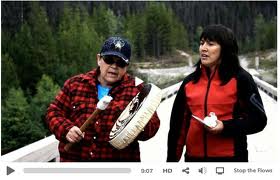 Freda Huson (right) with drummer on bridge near Unistoten camp in Wetusuwet’en territory.

Dini Ze’yu, Tsakiy Ze’yu, Skiy Ze’yu, and our countless supporters! I am glad to report that a real victory for our future has just happened!! Last night our strong community membership decidedly showed who makes the decisions on unceded Wet’suwet’en lands to the elected Moricetown Band Chief and Band Council. The Band Council had called an “Information Session” and invited representatives from PTP First Nations Limited Partnership (FNLP). The meeting was repeatedly interrupted by hereditary chiefs and clan members who bravely spoke their minds and made statements about protecting the lands. During the meeting one of the elected councillors decided to be arrogant and demand that the members be quiet to hear out the representatives. He said that we needed to be respectful of our guests. But the millions of dollars that was dangled in front of the membership in potential partnership agreements meant nothing to the community. Throughout the meeting the resounding message voiced in anger was, “WE WILL PROTECT OUR LANDS AND WATERS AGAINST ANY AND ALL THREATS! IT IS OUR RESPONSIBILTY!! WHAT IS HAPPENING HERE TO US IS DISPRESPECTFUL!”

The Unist’ot’en interrupted the meeting and Unist’ot’en spokesperson Freda Huson read out their Declaration to the pawns of PTP and said that the only people who will be making any decisions on Unist’ot’en Lands are the Unist’ot’en People. Tsakiy Ze’ Lhtat’en of the Unist’ot’en said to the Band Council and presenters, “Knedebeas – Christine Holland told us not to lose the land. The Unist’ot’en have never lost any of our battles, and we won’t lose this one!!” As Freda Huson began reading a declaration to the presenters and band council, large banners were unfurled warning against pipelines on the territory and the ‘Ewkh hiyah hoz dli  Drum Group began singing the powerful Wet’suwet’en War Song and performing the ancient War Dance in front of the elected council and presenters. The spirits of our Warriors could not be stopped. The War Song is likely still echoing in the hallways of the Moricetown Multiplex. At the end of the presentation there was a time set aside for questions but the council and presenters only heard statement after statement from the membership, “NO MEANS NO!” The meeting was abruptly put to a halt and the presenters from the FNLP quickly packed up and left denying the media in attendance any comments or interviews. Sne Kyalh Yah (Thank you) to all of our friends and family for attending and standing strong alongside our proud and strong ancestors. The future of our unborn is in your hands, let’s all keep making them proud!! – Toghestiy of the Likhts’amisyu & Freda Huson, spokesperson for the Unist’ot’en.

Tempers flared as the Pacific Trails Pipeline was the subject of an information session held in Moricetown last night.  Unis’tot’en Clan of the Wet’suwet’en Nation has set up a blockade last month to stop surveyors of the project to come through.

The information session was for the public to find out the potential benefits of the natural gas pipeline, but before the representatives on the First Nations Limited Partnership could finish, they were interrupted by protest. Members of the Unis’tot’en clan traveled from their blockade to say that no information session should be held, since they already said no. Dini Ze Toghestiy of the Unis’tot’en Clan “Attempting to disempower us as people in the decision making power, because they got up and said that 15 nations got up and signed up for the agreement, that it would be next to impossible for them to get out of the agreement, that this was going to happen whether we like it or not and it’s not something that we are going to take.”

Moricetown Band Manager Lucy Gagnon says, “I’ve had a chiefs name for almost fifty years,and I’ve never seen a war song brought into our fiest hall… you know there we wars that have happened many years ago and it was the first time that I’ve seen it and to have that dancer come in was a total surprise.”

Last night’s town hall meeting was solely for information purposes from FNLP and a decision is still not ready to be about the proposed pipeline. Gagnon says, “We will group and discuss the turn of events and see how they want to proceed with it all I was told was then we will meet with the hereditary chiefs and see in the new year where we will go with it… if the community doesn’t want us to sign on with it then the council will listen to that.”

Office of the Wet’suwet’en Natural Resources Manager David De Wit says, “There is still work ahead of us to really capture the values and the interest and really quantify those values on the land.”

FNLP representative Al Hudec did say that after things did settle down that they were able to get their message across.  “I think so in the end… it was very helpful when that one senior matriarch stood up and gave her story on how the elders want respect at these things, and when she gave her talk, you know respect the presenter.”

15 First Nations have already signed on and the Wet’suwet’en nation is the last one that is needed..  If the final answer is a no, then the company would have to decide whether or not the pipeline will go though. Hudec says, “Way the benefits to accepting the financial benefits package, any cost of impacts and then make their decision to participate in FNLP or go it alone.”