VANCOUVER—Systemic bias within the RCMP and Vancouver police led to “blatant failures” in investigating the disappearance of dozens of women from the Downtown Eastside who became victims of serial killer Robert Pickton, an inquiry found Monday.

The report by Commissioner Wally Oppal, called “Forsaken” in honour of the victims, concluded that the missing and murdered women were twice forsaken — by society at large and then again by police.

“The pattern of predatory violence was clear and should have been met with a swift and severe response by accountable and professional institutions, but it was not,” Oppal said. “I have concluded there was systemic bias by the police.”

Both the Vancouver police and the RCMP in B.C. said they needed more time to study the report.

“We hope that today the focus is truly on the families. Their reactions and responses need to be heard and listened to carefully,” said Vancouver police Chief Jim Chu.

RCMP Deputy Commissioner Craig Callens said the Mounties “deeply regret the disappearance, and ultimately the loss, of so many loved ones” and a thorough review has begun into the inquiry’s findings.

The inquiry was called after the murder trial and conviction of pig farmer Robert Pickton in 2007. Pickton, who was well-known among residents in the Downtown Eastside, and to the RCMP in Port Coquitlam where he lived, was arrested in 2002. His arrest followed years of women going missing from the Vancouver neighbourhood, a magnet for drug addicts, sex workers and the mentally ill.

Pickton was convicted of six counts of second-degree murder and is serving a life sentence in prison. He was initially charged with 26 counts of first-degree murder. Twenty counts were stayed after his conviction.

Oppal made 63 recommendations in his 1,445-page report released Monday following 93 days of hearings and submissions from nearly 400 individuals. Two the key recommendations were to provide funding to lengthen the operating hours of centres that provide emergency services to sex workers, and for better public transit connecting northern communities, particularly along Highway 16.

B.C. Attorney General Shirley Bond announced after the report’s release that the government was committing $750,000 to lengthen the hours of a shelter for sex workers in the Downtown Eastside and is planning to improve transit along that 742-km stretch of highway.

“There is no way to undo what has already been done, despite my wishing that was possible,” Bond said tearfully, speaking to the families of the missing and murdered women and community advocates. “We will work hard to prevent these circumstances from being repeated in our province.” 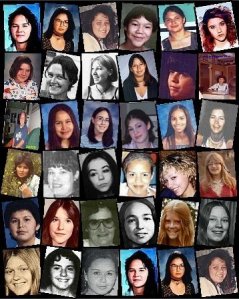 While many of the family members of the missing women listened intently to Oppal’s statements, other spectators interrupted him, chanted and beat drums, calling the process flawed and the systemic bias the commissioner referred to as deep-rooted racism.

“It’s very disappointing that the voices of my clients aren’t reflected and have not been heard through this process,” said Katrina Pacey, litigation director for Pivot Legal Society, an advocacy group for sex workers and residents in the Downtown Eastside.

Oppal’s inquiry was to look into the investigations by police between Jan. 23, 1997, when Pickton was first arrested and charged with assaulting a woman (those charges were later stayed), and Feb. 5, 2002, when he was arrested for the murders.

In northern B.C. communities such as Prince George, many advocates argued that Oppal’s mandate was too narrow and did not look into the disappearances of nearly 40 — mainly First Nations — women along Highway 16. That highway has been named by many the Highway of Tears because of the disappearances.

Oppal, a former attorney general in B.C., has also been criticized for not implementing a regional police service. Pickton’s victims disappeared from the Downtown Eastside, only a couple of blocks away from Vancouver police headquarters. The victims were taken to Pickton’s property in Port Coquitlam, about a 25-minute drive east of Vancouver in a jurisdiction overseen by the RCMP.

Ernie Crey, the brother of Dawn Crey, one of the women whose remains were found on Pickton’s farm, said that “police not working together permitted Pickton to go on killing. It’s time to get regional policing in place.”

While in jail, Pickton told an undercover officer that he was going to kill 50 women but was stopped at 49 because he “got sloppy.” The remains of 33 women were found on his farm, which has now been redeveloped into dozens of townhomes.

“The story of the missing and murdered women is a tragedy of epic proportions. It is simply unfathomable that these women were forsaken year after year,” Oppal concluded. “And yet they were.”

Serial killer Robert Pickton was convicted in December 2007 of the murder of six women from Vancouver’s Downtown Eastside. Some facts about those women:

Sereena Abotsway: Born Aug. 20, 1971, Abotsway suffered from fetal alcohol syndrome and lived with a foster family most of her life. She was 29 when she was last seen in August 2001.

Marnie Frey: Born Aug. 30, 1973 in Campbell River, B.C. Her daughter, Brittney, was born five years before she disappeared and gave an impact statement at Pickton’s trial. Frey was last seen in August 1997.

First-degree murder charges related to the deaths of 20 women were stayed in August 2010. Some facts about those women:

Cara Louise Ellis: Known on the street as Nicky Trimble, Ellis was born April 13, 1971 and was last seen in January 1997.

Sarah de Vries: Born May 12, 1969, to a troubled mother and adopted at 11 months. De Vries’ journals and poetry have been widely published since she was last seen April 21, 1998. Her sister, Maggie de Vries, wrote about her sister in the award-winning book Missing Sarah.

Inga Monique Hall: Born in 1952 in Germany, Hall had two daughters and two granddaughters. She was last seen in February 1998.

A 27th murder charge involving a woman referred to only as Jane Doe, whose remains were found on Pickton’s farm, was dropped. That woman has never been identified.

Police also found the DNA of six more women on Pickton’s farm. No charges were ever laid in those cases. Some facts about those women:

Stephanie Lane: Born May 28, 1976, Lane grew up in Vancouver. She was 20 years old and had recently given birth to her only son when she disappeared from the Downtown Eastside in January of 1997.

Jacqueline Murdock: Born Jan. 28, 1971, Murdock was the youngest daughter of a large First Nation family in Fort St. James. She had four children. She was last seen on Aug. 13, 1997.