Members of Six Nations in Ontario are protesting at wind turbine project sites in Haldimand County. “It’s a rotating protest that is going from one site to the next. So far, they’ve been to five or six sites,” Haldimand Ontario Provincial Police Const. Mark Foster told the Simcoe Reformer on Thursday afternoon.

Protests are being held in the area of Haldimand Road 55 near Cheapside (towards Nanticoke Industrial Park). Protests have halted construction at some locations. Reports say workers at the wind turbine sites were told to go home. There are no shortage of sites for natives to protest at in Haldimand. About 180 wind turbines are being put up in the county.

Earlier this month, the public was outraged when an eagles’ nest was removed from one of the wind turbine construction sites near Fisherville in Haldimand County. A tree housing the nest was cut down to make way for an access road for the Summerhaven wind turbine project.

As many as 30 natives in a convoy – some wearing traditional garb and waving native flags – interrupted work at several turbine and substation construction sites. At least one work crew gathered up its equipment and left for the day after they arrived.

The protests occurred in the area of Walpole concession roads 3 and 4 between Nanticoke and Varency. Const. Mark Foster of the Haldimand OPP said the roving protest touched down at half a dozen sites.

Josie Hernandez, spokesperson for NextEra, confirmed that the protest was motivated in part by her company’s removal of an eagle’s nest near Fisherville two weeks ago. Hernandez said the company welcomed the opportunity to share NextEra’s plans for habitat enhancements in the area where its turbines will be situated.

“We understand the need for protest,” she said. “That was good. We appreciated that. We will continue to communicate with them as this project proceeds. It is something we understand.”

Some predicted that aboriginals from Six Nations would react badly to the nest’s destruction, which occurred Jan. 5. A young pair built the nest in November in an area slated for three turbines. Aboriginals in southern Ontario consider eagles sacred.

Aboriginals weren’t the only ones upset by the incident. Nancy Nicklan, owner of Floyd’s Bar & Grill in Nanticoke and a witness to two of the protests Thursday, says everyone in south Haldimand is “furious” about it.

“That was it,” Nicklan said. “Everyone has been losing their minds since.”

Betty Ortt of Jarvis, president of Haldimand Wind Concerns, attended several of the protest sites as well. Ortt and her membership welcome the natives’ resort to direct action.

The type of wind turbines being resisted by 6 Nations members and others.

“We certainly don’t want these turbines going up in Haldimand,” Ortt said. “Yes, we welcome the support. We fought these projects at the (Environmental Review) Tribunal together.”

In recent months, Bill Monture of Ohsweken has been an appellant at ERT hearings involving the NextEra, Capital Power and Samsung wind projects. He and his supporters oppose the 184 turbines at issue because of their potential to disrupt wildlife and alter aboriginal hunting rights in this part of Ontario. Monture was among the protesters Thursday, but was unavailable for comment. 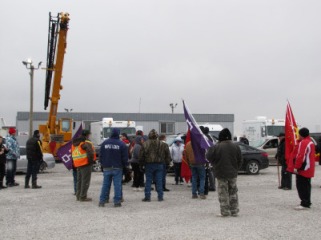 Hernandez confirmed that the protesters blockaded the delivery of a giant blade to one of NextEra’s construction sites. However, after a discussion of the issues, Hernandez said the blade was allowed to pass. Hernandez said NextEra crews were interrupted but all continued to work after the protesters moved on.

Hernandez also heard that a work crew vacated a turbine location once the protesters arrived. Whether it was a Capital Power crew could not be confirmed at press time. The 58 turbines in the Capital Power project will straddle the Haldimand-Norfolk border east of Port Dover.

Thursday’s protest was monitored by the OPP. Foster and witnesses to the event said it was peaceful and orderly.

Native protests have broken out across Canada in recent days as part of the First Nations’ Idle No More campaign. First Nations are upset with recent changes to federal legislation they say infringe on their treaty rights. They want a dialogue with Ottawa with an eye to making changes.

Traffic around Caledonia was disrupted for most of the day following another mass protest there on Wednesday. That protest too was staged as part of the Idle No More initiative. There was also a native demonstration outside the court house in Cayuga.

According to Tekawennake News, there were up to 100 participants in the roving actions, which were supported by the Haudensaunee Confederacy Chiefs of the Grand River and the Haudenosaunee Development Institute.  The protests were aimed, in part, at preventing construction of some wind turbines on Haudenosaunee land.

See the article “Against the Wind” by Jim Windle: