← Ktunaxa Nation and BC sign deal on revenue sharing from coal mines
Hawaii: Way of the Warrior →

The federal government is firming up its support of two projects that would see oil from Alberta piped to Atlantic Canada.

Natural Resources Minister Joe Oliver said he gave a tentative nod to one proposal in a meeting with industry giant Irving Oil.

“I met with Arthur Irving (Irving Oil’s chairman) and expressed the support of the government of Canada, in principle, for this initiative,” Oliver said in an interview with The Canadian Press.

It would be up to the National Energy Board to approve such projects, and TransCanada has not yet formally submitted the proposal for scrutiny.

Irving Oil owns a refinery in Saint John with a current capacity of about 300,000 barrels per day. If the conversion goes ahead, the pipeline could move upwards of one million barrels per day and benefit the Irving refinery.

Oliver said industry participants have built a solid business case for the proposal, and he supports it, so long as it passes the necessary regulatory hurdles.

“We in principle are very supportive and are encouraging the market participants to pursue it,” said Oliver. 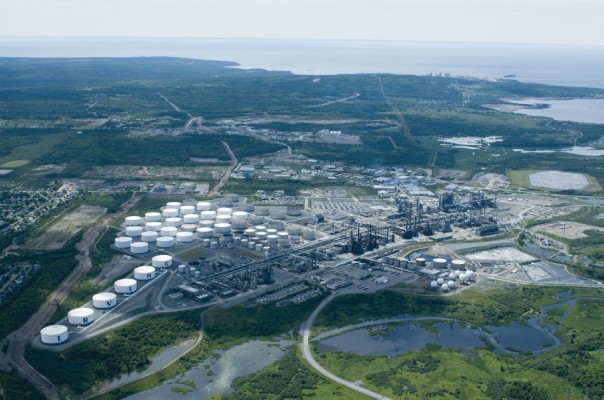 “To the extent that there are regulatory reviews, of course we respect that, and our support would be contingent on those reviews coming out positive.”

Another proposal would see Enbridge Inc. expand capacity on some pipes in the Great Lakes region and reverse the flow of another line between Montreal and southern Ontario – the so-called Line 9 pipeline that currently brings imported oil to a refinery in Sarnia, Ont.

Environmental groups have mounted a campaign against the Line 9 reversal, calling it just one more step towards creating an eastern route for “dirty” oilsands exports.

Oliver, though, said the proposal would have to jump through fewer environmental hoops and take less time than two controversial pipeline projects in the West — the Northern Gateway pipeline through British Columbia and TransCanada’s Keystone XL line into the United States.

“You don’t have the issue of the construction and the potential environmental impact which has to be assessed,” Oliver said.

“In both cases … the bulk of the line will have already been built, and that makes quite a difference. In terms of the surrounding area through which it goes there’s no (environmental) impact.”

Enbridge’s Line 9 actually flowed from west to east when it was built in the 1970s, but was reversed two decades later to respond to market conditions at the time.

Greenpeace is encouraging the Quebec government to turn down the pipeline proposal, saying it’s convinced that Enbridge plans an eastern export route for oilsands crude from Alberta.

Oliver appeared Friday to confirm the group’s concerns, saying that while initial plans are for piping non-oilsands crude from Alberta to the East, he expected that eventually the pipelines could carry bitumen from the oilsands.

After meetings with her counterparts from other provinces in November, Quebec Premier Pauline Marois agreed to set up working groups to examine the economic benefits and environmental risks of pumping Alberta crude through Quebec.

Alberta Premier Alison Redford and New Brunswick’s David Alward have also been talking for months about the feasibility of shipping oil to Saint John.

The benefits are many, advocates say. Converting and expanding the pipelines would create thousands of jobs and provide governments a significant revenue boost.

Consumers could eventually see lower gasoline and other fuel prices, because Western crude is much cheaper than the Brent crude refineries are using now.

It could also reverse the recent trend of refineries closing their doors, said former Liberal MP Dan McTeague, who runs a website dedicated to the tracking of pump prices.

“If we do nothing, we will continue to have higher prices,” McTeague argues.

“And that will not solve . . . the conundrum of Eastern Canadian refineries closing down while Western oil has no market in which to sell.”

Just over two years ago, a major refinery in Montreal was shuttered, which cut refining capacity in Eastern Canada by upwards of 10 per cent. There hasn’t been a new refinery built in Canada since the mid 1980s.

Eastern refineries currently rely on crude imported from overseas, which is more expensive than oil that comes from Western Canada. It’s just one of the reasons why gasoline prices are much higher in the East than they are the West.

A lack of adequate pipeline capacity has also meant Alberta crude hasn’t been able to find its way to the most lucrative markets.

Oliver said he sees great potential to tap into those markets with a west-to-east flow of crude.

“I think Canadians take pride in the resources they have. And if we develop them responsibly, this is a national building exercise.”

← Ktunaxa Nation and BC sign deal on revenue sharing from coal mines
Hawaii: Way of the Warrior →