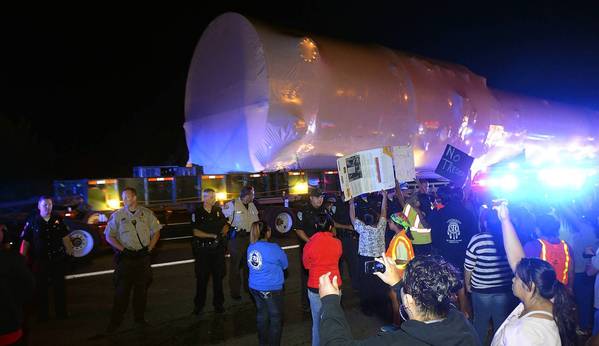 Since Monday, Nez Perce members and other activists have been blocking massive shipments of equipment bound for the oil tar sands of Canada. About 20 have been arrested.

SEATTLE — On a narrow central Idaho highway coursing through thickets of ponderosa pines and along a winding river, members of the Nez Perce tribe made their stand.

Hundreds gathered along U.S. Highway 12 on Monday and Tuesday and formed a human blockade in an attempt to stop a controversial megaload of equipment bound for the oil tar sands of Alberta, Canada — a load reportedly weighing about 644,000 pounds and stretching over 200 feet. They intended on continuing their protests Wednesday and Thursday nights.

The protesters — tribal elders, mothers with young children, and activists from elsewhere — slowed but did not stop the convoy carrying a giant water evaporator. After about 20 arrests for allegedly disturbing the peace by blocking the road, the load continued.

But the protest served as another point of focus among environmentalists and Native Americans who want to stop the giant shipments that they say clog roadways, disturb tourists and threaten a delicate, pristine landscape.

The picturesque terrain is home to white-tail deer, cougars, black bears and mountain goats, with rivers teeming with salmon and trout.

“Everything is in there,” said Silas Whitman, chairman of the Nez Perce tribal executive committee and among those arrested. “Yet they want to make it an industrial corridor.” By allowing the loads, he said, the tribe would “be a party to the destruction to those areas.”

The load this week has raised questions about who has the authority to approve such convoys. Omega Morgan, the Oregon contractor transporting a General Electric water evaporator, said it was operating under an oversized load permit approved by the Idaho Department of Transportation.

The company said it followed state-ordered guidelines that include traveling at night, not holding up traffic for longer than 15 minutes and not making any alterations to the roadways or surrounding vegetation.

But the U.S. Forest Service claims to have authority in cases in which the loads travel through protected lands. It has voiced opposition, saying in a statement that it disagreed with the state permit through the Nez Perce-Clearwater National Forests until a study could be completed in the coming months.

Forest Service officials are examining not only the effect on the ecosystem, but other intangible factors such as the spiritual value of the land to the tribe.

“That’s the part we struggle with, the intrinsic and spiritual value of this corridor,” said Rick Brazell, forest supervisor for the Nez Perce-Clearwater National Forests. “We can touch those biological things and get a feel for the numbers. We can’t gather that [kind of information with] intrinsic things you can’t see and touch, and they mean a lot…. We are on a path to get that information.”

Tribal officials said they had challenged use of the rural highway — traveled mainly by sportsman and tourists — as an industrial corridor, but their concerns had been ignored.

“The only way we surmise we could get to the man was through his pocketbook,” Whitman said.

They aimed for their protests to delay the shipments, causing the shipping company to lose money, discouraging further shipments.

Before the protests, Whitman said tribal leaders told police they understood officers would have to carry out their duty, even if it led to arrests.

On Monday, Whitman was the first to be cuffed. He was with his 10-year-old granddaughter. He told her to go back behind the barricade as he was carried off, to be taken to jail. “You have to stay here,” he said he told her. “You can’t go with me.”