The mood has changed at a standoff that turned violent today in Rexton, N.B., between shale gas protesters and the RCMP.

The majority of police at the scene left around 7 p.m., to cheers from a crowd of protesters.

John Levi, a First Nations chief on the scene, had earlier spoken to RCMP officers — trying to reach an agreement on ending the standoff.

It is not known what was said but, at the end of the conversation some 40 officers, who were wearing shields and helmets, left. About a dozen remained.

Levi later said that First Nations may have “lost the battle” referring to the fact that SWN Resources, the company at the centre of the conflict, has not agreed to stop shale gas seismic testing, as the protesters demand.

But “we have not lost the war,” he added.

Earlier in the day, protesters and RCMP clashed, leading to at least five police vehicles being set on fire and the arrest of a First Nations chief.

In a news release, the RCMP said more than 40 protesters were arrested for various offences including firearms offences, uttering threats, intimidation, mischief and for refusing to abide by a court injunction.

The protesters arrested were taken to three different communities where they are expected in court Friday morning around 9:30 to face charges. Police spread the arrested protesters out in an effort to prevent the courthouses being overwhelmed by protest supporters during the arraignments. 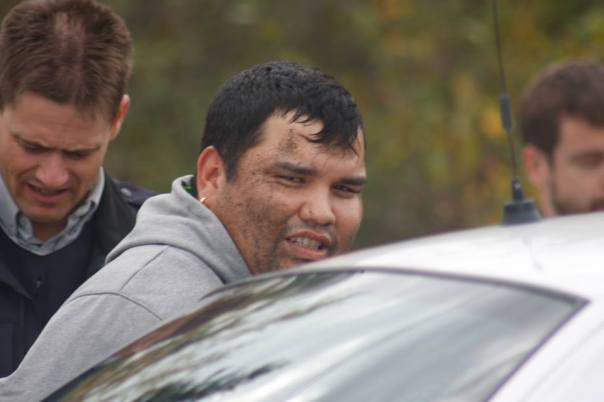 The RCMP said at least one shot was fired by someone other than police and that Molotov cocktails had been thrown at police, while at least five RCMP vehicles were destroyed by fire. Police also investigated suspected explosive devices at the scene.

The clashes started at about 1 p.m. after police fired pepper spray at the protesters, who were trying to push through the police line.

RCMP spokeswoman Const. Jullie Rogers-Marsh said that no rubber bullets were used but that RCMP members used “sock rounds” — also known as bean bag rounds, which are a type of non-lethal ammunition — on two occasions during the clash in an attempt to defuse the situation.

CBC reporter, Jennifer Choi, said thick black smoke was billowing from the scene, and she could hear popping and see sparks in at least one of the flaming vehicles.

It is not known whether ammunition was in the vehicles.  Bystanders backed away from the fire as a precaution, Choi said.

T.J. Burke, the lawyer for the Elsipogtog First Nation, confirmed Chief Aaron Sock was among those arrested in the clash. He and a few of his band council members were released a few hours after their arrests.

Sock is the leader of the band that has been blockading Route 134 near Rexton since Sept. 30.

On Oct. 1, Sock issued an eviction notice to SWN Resources of Canada. His band and his band council planned to pass a resolution preventing the government and shale gas companies from continuing their work by reclaiming all unoccupied reserve land and giving it back to First Nations.

It remained unclear exactly which land is involved, and how the band council planned to take it back, but Sock said getting SWN to remove its equipment would be a start.

Sock said earlier that, for centuries, the British Crown claimed to be holding the land in trust for his people, but since the land is being badly mismanaged, First Nations people are taking it back.

The road between Rexton and Highway 11 has been the scene of the protest, involving a coalition of natives and non-natives opposed to shale gas exploration.

Protesters moved into the area on Sept. 30, initially establishing a barricade to the staging area used by SWN Resources Canada to park its exploration vehicles and equipment.

The protest progressed to the point where barricades were also established on the road, preventing traffic from going through.

SWN Resources went to the Court of Queen’s Bench and successfully sought an injunction to end the protest.

During a hearing, court was told SWN Resources is losing $60,000 every day its seismic exploration trucks remain blockaded in the compound off Route 134.

The injunction authorized police to arrest and remove anyone contravening the order to allow traffic to pass on the highway. However, with negotiations taking place between the two sides, the RCMP didn’t immediately enforce the injunction.

On Friday, the injunction was extended. A single lane of Route 134 was subsequently reopened.

The RCMP moved in on the protesters on Route 134 in Rexton this morning.

RCMP notified the public at 7:45 a.m. about the closure of Route 134. A subsequent notice at 8:21 a.m. indicated Highway 11 was closed between Rexton and Sainte-Anne-de-Kent, and that delays could be expected.

The RCMP said the court injunction remains in effect and anyone who violates its conditions can be arrested and charged.

Video taken by protesters that was submitted to CBC shortly after the police started enforcing the injunction shows officers with dogs moving toward the protest encampment on the side of road. Protesters are yelling obscenities at police and inform them elders and children are present.

Meanwhile, an Anglophone North school district notice on its website said three schools in the area were open but under lockdown as a precaution. Around noon, the board announced Rexton Elementary, Eleanor W. Graham Middle School and Bonar Law Memorial High School would close for the day, and students would be sent home.

“Safety and security is paramount for our students and staff,” said the school district’s public notice.

“Please know that we — and First Nations across the country — stand proudly in solidarity with you and your community. Most importantly, the safety and security of our citizens is our foremost concern at this time,’ he said.

In a news release, Atwin said the Assembly of First Nations in New Brunswick “strongly condemns the acts of aggression that have taken place today within the Mi’kmaq traditional territory near Elsipogtog. We urge all sides not to resort of violence as history has proven these tactics are not productive.”

Atwin noted, however, that for the past two years, First Nations in New Brunswick have tried to work within the confines of “a restrictive, compartmentalized consultation process” when it comes to seismic testing in the province.

He said the whole process is “completely unworkable because it runs counter to our customs and traditions.”

In the same release Assembly Co-chair Chief George Ginnish said the consultation process should include “conversation on potential impacts to our constitutionally protected rights, and provide options to mitigate these dangers.”

Ginnish has called on “an immediate end to the violence by all involved, to restart the process taking into account all perspectives in New Brunswick and the inalienable rights of aboriginals.”

Politicians in New Brunswick have also spoken out about the protest.

Opposition Leader Brian Gallant released a statement calling on protesters to respect the injunction and that he hopes for a peaceful resolution.

“I witnessed the protest first-hand this morning. There is much angst and anxiety at the protest site and in the surrounding communities. The dialogue must immediately resume in order to resolve the differences that have arisen,” he said.

New Brunswick Premier David Alward’s office has not returned calls from the CBC, but Alward posted a statement on the government’s website saying he is “deeply troubled that violence has erupted on Route 134 near Rexton.”

“While we respect and defend the right of individuals to protest peacefully, we cannot endorse or tolerate unlawful activity,” he said.

Alward also said the government of New Brunswick will do everything in its power to bring about a peaceful resolution.