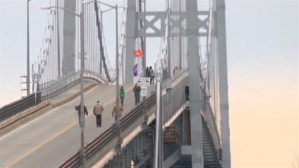 OTTAWA — The Seaway International Bridge between Cornwall and the U.S. was closed for about an hour Saturday as First Nations protesters stage an “information march” in opposition to hydraulic fracking gas extraction processes.

The bridge was closed at about noon as about 50 protesters from the Akwesasne First Nation and others walked along the span handing out information flyers.

The protest was originally planned in support of protests in New Brunswick involving the Mi’gmaq people, but organizers say their intention was to highlight the fact that the controversial extraction process was “spreading out all over the place.”

“There was no difficulty, it was just a matter of everyone’s safety,” she said.

About a dozen people from an Idle No More group based on the Akwesasne Mohawk reserve are marching today against shale gas exploration.

They blocked the Seaway International Bridge, also known as the Three Nations Bridge, connecting Cornwall, Ont. and Massena, NY for about an hour early on Saturday afternoon.

The group gathered to raise public awareness about the dangers of fracking, the process used to extract gas from the earth by injecting fluid into shale rocks to release the natural gas inside.

The demonstrators also wanted to show solidarity with the Mi’kmaq protesters in Rexton, N.B., where tensions exploded three weeks ago after the RCMP tried to dismantle a blockade set up by protesters.

The Mohawk Council of Akwesasne posted a note to its Facebook page on Nov. 6 saying its members had met with the group of protesters prior to the march and they confirmed bridge traffic wouldn’t be disrupted.

The council said in the note that the group vowed instead to undertake an educational campaign and pass out leaflets during the demonstration. However, the protest veered onto the bridge, forcing local police to close it.

According to Cornwall police, the bridge has since re-opened and traffic is flowing freely.

No arrests have been reported so far. Akwesasne police were unavailable to comment.

Akwesasne straddles the border between Quebec, Ontario and New York.