Activists plot how to block new pipelines in B.C.

At night, around campfires under a New Brunswick sky, Ambrose Williams thought about imminent battles back home.   Last November, the young Vancouver man and nine others travelled more than 5,000 kilometres east to the town of Rexton.  Their mission was to reinforce the Mi’kmaq of the Elsipogtog First Nation who had clashed the month before with the RCMP. The confrontation happened on October 17, 2013, when heavily armed police dismantled a highway blockade by Natives opposing a gas-exploration project.

“I saw it as a staging ground,” Williams told the Georgia Straight about his journey during a December 27 interview—the day he returned—near Vancouver’s downtown waterfront.

According to the 25-year-old former president of the Aboriginal Life in Vancouver Enhancement Society, it was “good training to see how police tactics are used against aboriginal people and protesters”.

That knowledge may become valuable later.

Williams’s Gitxsan and Dene ancestors are from northern B.C., where lies the path of the Northern Gateway oil pipeline proposed by Enbridge Inc. This is also where planned gas pipelines to the west coast will pass. These will cross pristine forests and waters as well as traditional Native territories.

About a week before he returned to Vancouver, a federal joint review panel endorsed for cabinet approval the 1,177-kilometre pipeline that will carry diluted bitumen from Alberta’s oilsands to the port in Kitimat, B.C., for shipment to foreign markets. 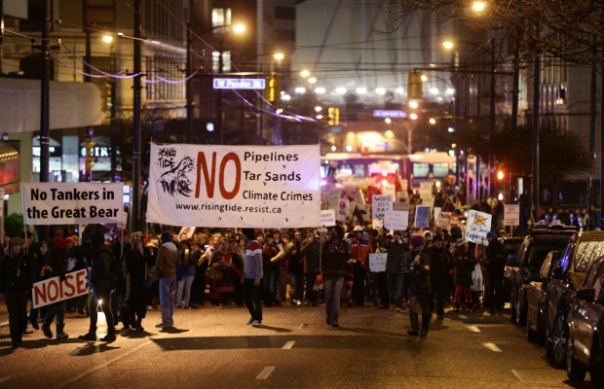 Williams echoed the vow by Native and nonaboriginal activists that Northern Gateway “will not be built”.

He expects “protection” and “decolonization” camps rising, blockades going up, and occupations. He cited as an example the 1990 crisis in Oka, Quebec, where Mohawks, some of whom were armed, came face to face with police and the military.

“We’ll hit them on all fronts and just keep on hammering,” Williams pledged.

He stressed that he neither encourages nor condones sabotage and other acts of destruction. But the soft-spoken Williams also said that “anything like that is acceptable if the cause is just. And stopping the pipeline is a just cause.”

“Everyone has their line, and once they cross it, then they’re accountable for themselves and the actions that they’ve caused,” Williams added. “We can’t go around telling people what to do, what to say. But everyone needs to realize they will come up to this line at some point, and they have to be willing to cross it or not.”

Acts of sabotage in the name of the environment are rare in B.C., according to Zoe Blunt (her activist name; legal name Tracie Park), a veteran of antilogging protests. Not only rare, but most people are also reluctant to talk about them, the Victoria-based activist noted.

“It’s difficult for anyone who is speaking out publicly in favour of sabotage, or even in, like, a neutral way…because they’re facing not only condemnation and denunciation from the corporations, the police, [and] the government but also the mainstream environmental groups,” Blunt told the Straight in a phone interview.

But she maintained that actions like tree-spiking and monkey wrenching—the destruction of property and machinery—helped stop the clear-cut logging of ancient forests in Clayoquot Sound on Vancouver Island and in the Elaho Valley near Squamish during the 1990s and 2000s.

Although acts of civil disobedience during the Clayoquot Sound conflict are celebrated, Blunt said, there’s hardly ever a mention that 20,000 trees are believed to have been spiked to ward off chainsaws.

That’s one reason why she’s working on her first book—a slim one, she said—with the tentative title The Pros and Cons of Tree-Spiking: The Secret History of Eco-Sabotage in British Columbia.

“Radicals assert that our society is founded on violence and coercion, much of it invisible,” Blunt writes in a draft she forwarded to the Straight. “Social critics note the accepted order of things is for the strong to abuse the weak. But when those lower on the hierarchy push back, the reaction is fear and horror.”

Her research material includes writings by former Vancouverite Paul Watson, world-renowned founder of the Sea Shepherd Conservation Society, a direct-action group operating on the high seas to protect whales and other marine wildlife.

In one 1990 manuscript titled “In Defense of Tree-Spiking”, Watson recalled organizing a “small cadre of concerned eco-activists” in 1982 when the Grouse Mountain Ski Resort announced that it was selling timber rights on a part of the mountain overlooking Vancouver.

Armed with hammers and metal spikes, they spiked 2,000 trees. They also posted warnings in the area. Watson and his companions then drove across the bridge to Vancouver and delivered news releases about their action, which generated front-page stories.

They followed up with TV interviews. Wearing masks, they all identified themselves as Wally Cedarleaf.

“Within a day, the sawmills stated flatly that they would not buy logs from the spiked lot,” Watson wrote. “The deal was off. Grouse Mountain Resort people were furious. We were denounced as terrorists and criminals by those we thought were our allies—the North Vancouver City Council, Greenpeace, and assorted other eco-bureaucrats.

“We didn’t give a damn—the trees were saved,” Watson continued. “Grouse Mountain would remain intact. The tactic worked.”

In the same document, Watson commented on civil disobedience, a symbolic and peaceful violation of the law, like sit-ins.

According to Watson, civil disobedience is “costly to its participants both financially and physically”.

The “establishment loves” civil disobedience, he stated. “The authorities are trained to deal with it. There are no surprises.”

Oil and gas pipelines are part of the energy-and-utilities sector, one of 10 sectors identified by the federal government in its 2009 National Strategy for Critical Infrastructure.

It defines critical infrastructure as “processes, systems, facilities, technologies, networks, assets and services essential to the health, safety, security or economic well-being of Canadians and the effective functioning of government”.

The strategy sets out a collaborative approach by the national government, provinces, territories, and private infrastructure owners and operators to protect these assets against “natural, intentional and accidental hazards”.

Critical infrastructure is also mentioned in a major security document released in 2012 and updated in 2013 by the federal government titled Building Resilience Against Terrorism: Canada’s Counter-Terrorism Strategy.

The government identifies “domestic, issue-based extremism” as one of three sources of terrorism threats in the country.

Noting that “domestic issue-based groups remain a reality in Canada”, the document states that these revolve around issues that include “environmentalism”.

“As part of this Strategy,” the paper notes, “the Government works closely with the owners and operators of critical infrastructure to identify risks and to understand what in practice can and should be done to reduce security vulnerabilities.”

It also states that under new legislation related to terrorism, the definition of “harm to Canadian interests” includes “interference with critical infrastructure”.

In 2000, Wiebo Ludwig, a Dutch immigrant and leader of a Christian community in Alberta, was convicted on five charges related to bombings and vandalism of oil and gas wells in that province; he received a 28-month sentence.

The RCMP, Enbridge, and the Canadian Association of Petroleum Producers refused Straight requests for interviews. The Canadian Energy Pipeline Association did not respond to an interview request by the Straight before deadline.

Joe Alaimoana is the general manager of All Peace Protection, an Alberta-based security-guard company with clients in the oil industry. A Samoan from New Zealand, he is also the company’s First Nations economic-development officer, working to provide security jobs to aboriginal people in B.C. and Alberta.

According to Alaimoana, remote sites are a big challenge.

“It’s very easy for people to hide in there and start stealing and tampering with equipment,” Alaimoana told the Straight in a phone interview.

Safety for oil-and-gas employees and contractors working in isolated areas is also a concern, he added.

From East Vancouver, Gord Hill followed events in New Brunswick as the Mi’kmaq battled the police and employed various tactics against SWN Resources Canada, the company exploring for shale gas that will be extracted by means of hydraulic fracturing, a controversial method also known as fracking.

The Kwakwaka’wakw man noted that in court filings for an injunction against protesters, SWN stated that several company vehicles had been damaged and more than 1,000 geophones sabotaged. Geophones are devices for mapping gas deposits.

The Mi’kmaq also set fire to RCMP cruisers during the October 17 clash. A few days later, the RCMP abandoned its detachment in the Elsipogtog First Nation community following an arson attempt. The Canadian flag at the Mountie outpost was replaced with a Native warrior flag.

“With the Mi’kmaq struggle, you saw a lot of sabotage occur,” Hill told the Straight in a coffeehouse interview.

Turning to Enbridge’s Northern Gateway in B.C., Hill said he expects legal challenges and a massive mobilization of public opinion against the project.

“But then beyond that…what I think is really important is…a grassroots Native movement,” he said. “It’s the only one that really has the capability of engaging in more radical tactics or the willingness to engage in more radical tactics. Something like what happened in New Brunswick with the antifracking struggle from the Mi’kmaq. I mean, that’s an example for Native communities to look at as to how grassroots Native people can resist these kinds of projects.”

He sees one grassroots movement emerging with the Unis’tot’en clan of the Wet’suwet’en First Nation in northern B.C.

The Unis’tot’en have set up camp in the way of the planned Pacific Trails gas pipeline. The project was granted an environmental-assessment certificate by the B.C. government in 2008. It is expected to be operational in 2015.

In a 2012 interview in Vancouver, Unis’tot’en spokesperson Freda Huson told the Straight that Pacific Trails will clear the route for Enbridge’s Northern Gateway oil pipeline and other gas pipelines.

When asked how her people will deal with a potential violent confrontation, Huson replied: “We’ll do what we need to do.”

While growing up, Ambrose Williams spent many summers with his Gitxsan and Dene relatives in northern B.C., where they live next to the Unis’tot’en clan of the Wet’suwet’en Nation.

When Williams returned to Vancouver on a bus from Calgary in the early morning of December 27, he didn’t bother with a rest. He went straight to meetings with people opposing oil and gas developments.

One of these was Shannon Hecker, a UBC anthropology student. They got acquainted through social media when Williams was in New Brunswick and Hecker was organizing rallies in Vancouver in solidarity with the Mi’kmaq.

Williams and Hecker met personally for the first time on that day he came home, and he invited her to join the interview with the Straight.

According to Hecker, resistance to oil and gas pipelines in B.C. and antifracking protests in New Brunswick are “all related…a case of people standing up to defend Mother Nature from desecration as a result of unsustainable resource extraction. The pipelines is just like another sort of front on that same war.”

As to how far people should go, Hecker said: “That depends on your willingness to commit. I don’t want to tell anyone what they should or shouldn’t do. But we all need to be aware that this is a war.”