By Jorge Barrera, APTN National News, Jan 8, 2014
The federal government prepared for the potential of a nation-wide flare up of protests triggered by heavily-armed raid last October by RCMP tactical units on a Mi’kmaq-led anti-fracking camp in New Brunswick, internal government records show.

Ottawa’s nerve centre created to deal with national threats immediately swung into action to deal with the potential of cross-country protests in response to the RCMP’s Oct. 17, 2013, raid which led to 40 arrests and the torching of several police vehicles.

The RCMP said it seized several rifles, ammunition and crude explosive devices during the raid which freed trapped exploration vehicles owned by a Texas-headquartered energy company searching for shale gas deposits near the Mi’kmaq community of Elsipogtog.

Ottawa’s Government Operations Centre (GOC) at least two conference calls immediately following the raid with representatives from the Canadian Security Intelligence Service, the Department of National Defence, Foreign Affairs, the RCMP and the Privy Council office, along with several other federal departments, according to records obtained through the Access to Information Act by APTN National News. 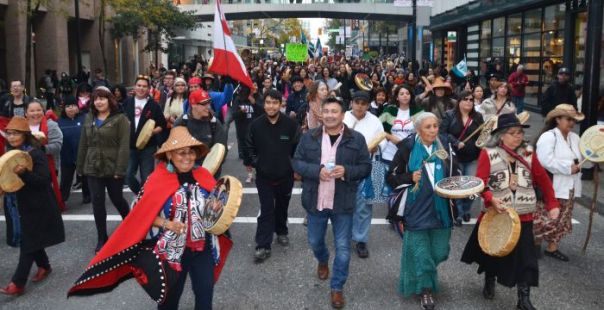 The GOC is run out of Public Safety and describes itself as  “an all-hazards integrated federal emergency response to events (potential or actual hazards, natural or human-induced, either accidental or intentional) of national interest,”

“On the morning of 17 Oct 2013, the RCMP served an injunction on protestors at an anti-shale gas protest blocking a rural highway near Rexton, NB. Due to violence which occurred later in the afternoon of 17 Oct, the RMCP arrested at least 40 people for various offences,” said the GOC’s notice requesting both calls. “Following these, various supports of the protest called for peaceful actions of solidarity on 18 Oct and 19 Oct in support of the protesters at Rexton using social media sites like Twitter and Facebook. The GOC requires your assistance and invites you to participate in a teleconference call to enhance coordination and information sharing.” 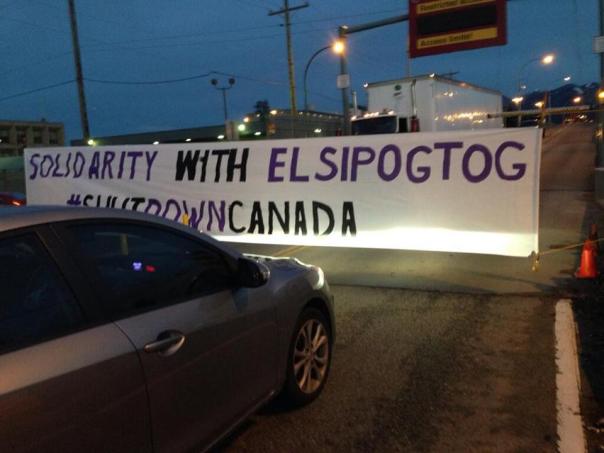 The GOC also distributed a map of the Rexton, NB, area where the RCMP raid occurred along with a spreadsheet detailing planned 32 support actions across the country for Oct. 18 and Oct. 19. The RCMP provided information on 17 of the planned support actions, according to the spreadsheet. The listed actions included a jingle-dress healing dance in Kenora, Ont., a prayer ceremony in Edmonton and an Idle No More “taco fundraiser, raffle and jam session” planned at the Native Friendship Centre in Barrie, Ont.

The list also included rallies in Saskatoon and Prince Albert along with a rally in Kitchener-Waterloo, Ont., featuring Idle No More founder Sylvia McAdam and Brigette DePape, the former Senate page who held up the “Stop Harper” sign during a Throne Speech. The RCMP provided the event’s information.

Mi’kmaq from Elsipogtog and sister communities in the region, with support from area Acadian and Anglophone communities waged a months-long battle with SWN Resources Canada to stop the Houston, Tex., based energy company from finishing its shale gas exploration in the region fearing deposit discovery would lead to hydraulic fracturing, or fracking. The camp anchored by the Mi’kmaq Warrior Society blocked Hwy 134 which passes through Rexton and blocked a compound holding SWN’s exploration vehicles.

RCMP tactical units, with some officers clad in black or wearing camouflage and wielding assault weapons, raided the camp on the morning of Oct. 17. One shot was fired, which the RCMP said did not come from its officers, and Molotov cocktail was thrown at police during the initial stages of the raid. Once word spread in Elsipogtog, community members rushed to the scene and clashed with RCMP officers who used pepper spray and sock rounds to control the crowd.

During the raid, Aboriginal Affairs pulled four of its employees from Elsipogtog over security concerns.

At 1:09 p.m. Jean-Francois Legault, director of security for the department, wrote then-associated deputy minister Colleen Swords that he had advised the four employees to leave the community because the situation risked escalating.

“For the moment their security is not at risk but we should not take any chances,” wrote Legault.

The four employees had entered the First Nation through a “back way” and encountered no protestors. Legault announced in a 3:19 p.m. email that the employees left the community safely.

“It may be helpful to get a sense of their assessment of this action and begin to identify some on the ground contacts on Canada’s side should we need to open up dialogue,” wrote Diabo at 3:21 p.m. on the day of the raid.

Aboriginal Affairs, however, tried to maintain its distance from the event on grounds that it was not impacting services in Elsipogtog.

Meghan-Tia Robertson, acting manager for operations with the Emergency Management Directorate, sent a message at 3:03 p.m. to several department officials saying the directorate saw no need to issue notifications on the ongoing events.

“After further discussion, we have decided not to notify on this at this time since it does not involve an emergency on reserve and is not really impacting business continuity on the reserve,” wrote Robertson.

Aboriginal Affairs also believed that the protestors in Elsipogtog were divided between “Some more extreme and others willing to negotiate a settlement,” according an email sent at 1:39 p.m. by Robertson.

Robertson, quoting information from William Nye, a program implementation officer in Amherst, NS, said that Elsipogtog Chief Aaron Sock and several councillors were among those seeking a negotiated settlement.

“There are also several elders from Elsipogtog who are working as advisors for SWN,” wrote Robertson.