Fight the Pipelines: Answering the call to action 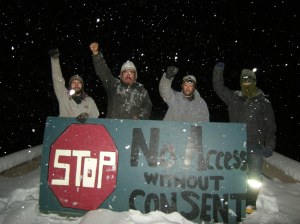 What’s happening? What should we do? What happens next?

WORK HAS STARTED ON THE PIPELINE ROUTE

It’s not clear exactly how much work has been done on the Pacific Trail and Enbridge Northern Gateway pipeline route. Most likely they are clearing trees and brush. Worst case: They are digging trenches and laying pipe already. The info from Unis’tot’en Camp says the work is starting from the east and west and it will meet the indigenous blockade in the middle. http://unistotencamp.com/?p=761Background: Pacific Trail is the gas pipeline from the fracking fields in NE BC to Kitimat. It was approved in 2012. Pacific Trail shares a right-of-way with the Enbridge Northern Gateway tarsands pipeline to Kitimat, set to be approved by the Harper Government any moment.

We know this game is rigged. It’s time to play a new game.

GET READY – the Harper Government is about to announce final approval for the Enbridge Northern Gateway pipeline. it will be up to us to respond in a way they can’t ignore. Everyone who loves this land, its coasts and rivers – get ready to stand up and raise hell.

WHAT SHOULD WE DO?

Join the Action Trainings March 29-31 in Victoria and April 5-6 in Vancouver (details to be announced.)

CELEBRATE our RESISTANCE and our LOVE for MOTHER EARTH!