Several hundred people gathered at Vancouver’s Main and Hastings intersection for the 23rd annual Women’s Memorial March.  The march originated in Vancouver’s Eastside in response to the growing list of missing and murdered women, primarily Indigenous and poor.

As often occurs at this annual march, two eagles were seen flying overhead while hundreds gathered for ceremony and remembrance of mothers, sisters, aunties, cousins and friends who are missing or murdered.  The number of those participating in this event was reported as between 500-1,000. 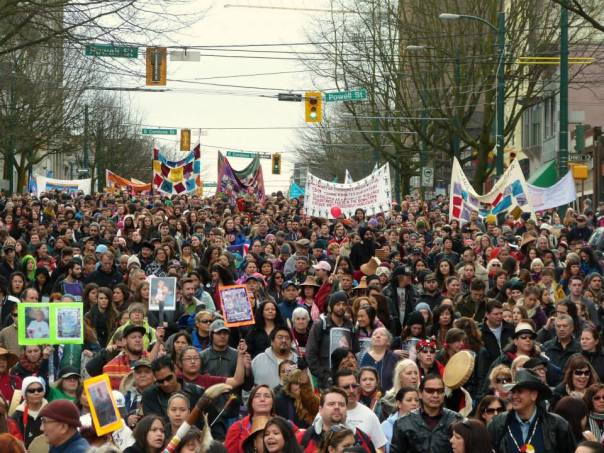 According to the Women’s Memorial March wordpress site: “The February 14th Annual Women’s Memorial March is held on Valentine’s Day each year to honour the memory of all women from the Downtown Eastside who have died due to physical, mental, emotional and spiritual violence in any form. Now in its 23rd year, the march brings courage and commitment to remember and honour murdered and missing women, and to end the violence that vulnerable women in the DTES [Downtown Eastside of Vancouver] face on a daily basis.”

Over the last ten years or so, the memorial marches have spread to other cities and towns across the country.  This year, marches were also held in Montreal, Toronto, Victoria, Ottawa, Thunder Bay, Edmonton, Calgary, London (Ontario), Kenora, Saskatoon, Nelson (BC), Kelowna (BC), Peterborough (Ontario), and Smithers (BC).

Statement on the origins of the march:

“Their Spirits Live Within Us”: Annual Women’s Memorial March for Murdered and Missing Women

In January 1991 a woman was murdered on Powell Street. Her name is not spoken today out of respect for the wishes of her family. This woman’s murder in particular was the catalyst that moved women into action. Out of this sense of hopelessness and anger came an annual march on Valentine’s Day to express compassion, community, and caring for all women in Vancouver’s Downtown Eastside, Coast Salish Territories.

Decades later, the march continues to honour the lives of missing and murdered women. This event is organized and led by women in the DTES because women, especially Indigenous women, face physical, mental, emotional, and spiritual violence on a daily basis. The heinous and unimaginable violence that have taken the lives of so many has left a deep void in our hearts. We gather each year to mourn and remember our sisters by listening to their family members, by taking over the streets, and through spiritual ceremonies.

Increasing deaths of many vulnerable women from the DTES still leaves family, friends, loved ones, and community members with an overwhelming sense of grief and loss. Every year the list of women going missing also increases. Over 3000 women are known to have gone missing or been murdered in Canada since the 1970s. Last year, the United Nations Committee on the Elimination of Discrimination against Women issued this statement: “Hundreds of cases involving aboriginal women who have gone missing or been murdered in the past two decades have neither been fully investigated nor attracted priority attention.”

The February 14th Women’s Memorial March is an opportunity to come together to grieve the loss of our beloved sisters, remember the women who are still missing, and to dedicate ourselves to justice. Please join us.