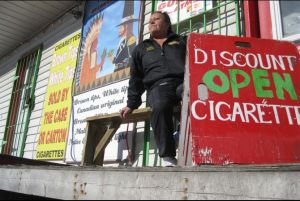 By Jorge Barrera, APTN National News, May 1, 2014
Mohawk police officers uncovered a cache of weapons Wednesday inside the home of an Akwesasne man whose strip club was allegedly used to store North Carolina-grown raw tobacco after it was smuggled into Canada by an Italian Mafia-run network, APTN National News has learned.

A Surete du Quebec-led police operation unfolded across the Montreal region and in the border-straddling community of Akwesasne Wednesday morning aimed at dismantling an alleged tobacco smuggling network that moved raw tobacco across the Canada-US border to the Mohawk community of Kahnawake near Montreal for cigarette manufacturing.

The suspicion of weapons and drugs moving through Akwesasne drew the Akwesasne Mohawk Police into the SQ investigation, said the force’s Chief Jerry Swamp.    ‎

“The investigation started as a tobacco file. The Akwesasne police became involved when weapons and drugs were identified going through the community,” said Swamp.

David and his three family members were all transported by the Akwesasne police across the St. Lawrence River by boat to Cornwall, Ont., from where they were then transported to Montreal. St. Regis Village, which is on the south shore of the river, is part of the Akwesasne reserve in Canada, but it is only accessible by road through the U.S.

David also operates an unlicensed cigarette factory on the U.S. side of Akwesasne that primarily manufactures unmarked “rollies,” which are cigarettes sold in plastic bags.

David is also an owner of the Sweet Dreams strip club in Dundee, Que., where the SQ allege some of the tobacco was stored before it was taken to Kahnawake. The strip club was also raided Wednesday, said Sgt. Joyce Kemp.

The 18 month-long investigation that led to the arrests of about 30 people, including two from Kahnawake and a total of five from Akwesasne, began on a tip from U.S. authorities. The Bureau of Alcohol, Tobacco, Firearms and Explosives has been tracking tractor trailer shipments of tobacco from North Carolina heading north.

The SQ said Wednesday that the operation, dubbed Project Lycose, was one of the largest ever in North America targeting the underground tobacco trade.

The Quebec force claimed the network’s smuggling defrauded the government tax coffers of about $30 million. About 400 officers participated in the raids which included the involvement of the RCMP, Canada Border Services Agency, the Akwesasne Mohawk Police, several municipal police forces and the U.S. Department of Homeland Security.

The SQ said the smuggling network was allegedly headed by a Mafia-linked businessman named Nicola Valvano, from Saint- Leonard, Que. Montreal Mafia members would buy the unprocessed tobacco from North Carolina and then transport it to Canada hidden in transport trucks carrying cedar mulch. The trucks, registered under false companies, would then take the tobacco to locations near Montreal and remain there for between 24 to 72 hours before rolling to Kahnawake where the tobacco would be used by local cigarette factories.

The Mafia-linked members allegedly split the profits of the operation 60-40 with their Mohawk partners, said Kemp.

The SQ also arrested two Mohawk men from Kahnawake Wednesday, Devery Bauersfeld, 52, and Kanentiio Ross, 36.  The SQ were searching for another man, Michael Rosetti, 50, who is not Mohawk but is married to a Mohawk woman from Kahnawake.

The Kahnawake Peacekeepers police force said it would not execute any arrest warrants related to tobacco investigations.

“How far are they really linked into organized crime?” said the source. “Or are they only related through tobacco but are being roped into this whole process? They are just normal people in the community.”

According to diagram of the organization provided by the SQ, the Kahnawake men were identified as “Purchasers in Kahnawake.”

The SQ said it seized about 40,000 kilograms of tobacco which is worth about $7 million on the black market and would have resulted in a $10 million tax loss if turned into cigarettes. Police also seized $45,000 in cash and 1,300 marijuana plants.

Police have arrested 28 suspects and are on the hunt for seven others in a major tobacco raid Wednesday.

About 400 officers were involved in the operation which is, according to the SQ provincial police, aimed at aboriginal organized crime and Montreal Mafia networks.

Nicola Valvano, said to be one of the ringleaders, was among those arrested.

Police, speaking at a morning press conference, said that underground tobacco sales deprive the province of about $20 million in tax revenues per year.

The raids hit such targets as a building on Jean Talon in St. Leonard, a home in Anjou and a strip club in Dundee, near the U.S. border.

Surete du Quebec Sgt. Joyce Kemp said the bulk tobacco which made its way into Canada in big trucks purchased by the Mafia in North Carolina.

“It was hidden with other merchandise (and) often what was used was cedar mulch to hide the (odour) of the tobacco,” said Kemp.

Police said the tobacco was imported through the Lacolle border crossing or through the Akwesasne Mohawk reserve. The cigarettes were then allegedly sold on the Kahnawake reserve south of Montreal.

SQ police representative Michel Pelletier said that ringleaders would purchase the tobacco in the United States and transport it via the Lacolle border crossing or the Akwesasne reserve and would then sell it on the Kahnawake reserve.

A SQ spokesman reported that the provincial police undertake 1,500 tobacco-based operations across Quebec each year, leading to about 1,600 arrests.