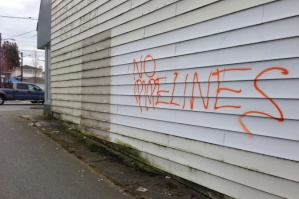 At around 9AM on June 3, 2014, approximately 16 cops from the Vancouver Police Department raided a house in East Vancouver under the pretext of investigating six mischief charges related to graffiti tags dating from June, July, and October of 2013. The four residents of the house, and one guest, were removed one by one by police aiming pistols at them. One person inside the house looked out their bedroom window and saw a cop pointing his pistol at him.

The house targeted by the raid is comprised of radicals involved in Indigenous resistance as well as anarchist projects in the city (including myself, the editor of the Warrior Publications wordpress site).

Once removed from the house, the five people were placed in a prisoner transport van parked out front while a K9 team entered the house to search for any remaining people. After the K9 team searched the house, a forensic identification unit with a video camera appeared. They first filmed the exterior of the house and the yard, then entered the house itself. After filming the interior, they then used a camera to take photos.

At around 11AM, all but one of the five persons detained were released. The last person held was told he would be charged with 6 counts of mischief under $5000 and taken away in the prisoner transport van. Those released were told to leave the area and that police would contact them once the search was over.

The individual arrested was taken to the downtown Vancouver jail where cops from the Integrated Graffiti Task Force attempted to interrogate him. They mentioned spray painted tags and anti-pipeline graffiti. At around 3:30PM he was released without charges, although told that the investigation was ongoing and that charges could still be laid.

At around 6PM, police informed the residents that the search had been completed. At this time, the warrant for the search was found in the kitchen, naming the target of the raid as well as a list of items referred to as “graffiti vandalism paraphernalia.” This included paint, spray paint, markers, paint markers, latex or rubber gloves, painter’s masks, glass etching kits, books with graffiti images, notepads or paper with images or graffiti, any computer electronic storage devices such as USB’s or external hard drives, camera, film or any digital storage cards, photographs, pictures (such as canvas), video tapes or DVD that may contain graffiti, cell phones with the ability to take photographs or video, a particular coloured baseball cap, black knapsack and black hoody, dark jeans, plus “forensic examination and recovery of data to determine ownership and use, including… contact lists, text messages, emails, call logs, video and photos from any computers, cell phones or electronic storage devices.”

The main items taken during the raid were laptop computers, USBs, and cell phones. A collection of political zines and some banners were also taken, along with a video camera and a black hoodie.

The primary warrant was dated June 2, 2014, and sworn by Detective Derek Wong of the Vancouver police based at 2120 Cambie Street. The time for the execution of the warrant is stated as being from 6AM to 9PM. The warrant is signed by EE Bowes.

There is also a secondary warrant which is dated June 3, 2014, sworn by Ram Greoriou who is identified as a Vancouver police officer. This warrant has a time of 3-5PM listed and is also signed by EE Bowes.

Considering the minor nature of the charges, the raid carried out by the Vancouver police is clearly part of a larger strategy of politically motivated repression against radicals and especially the growing resistance against oil and gas pipelines throughout the province. As a tactic, the raid enables police to seize items such as computers, extract information from them, disrupt communications, and very possibly emplace spyware prior to their return. The raid and its subsequent occupation of the space by the cops provides them with the opportunity to take a snapshot of their target’s lives, and to possibly put in place listening devices. As a part of a strategy of repression, the raid is an attempt to intimidate and silence those involved in resistance movements.