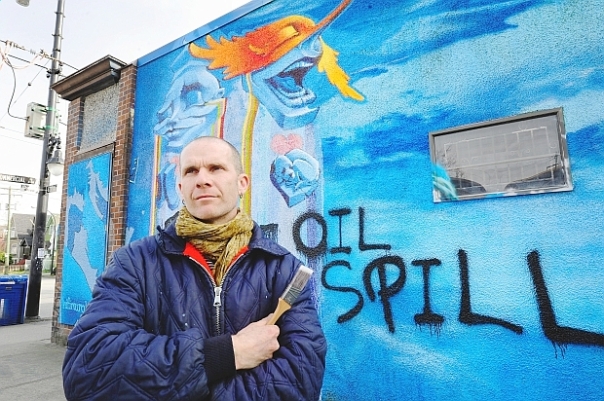 Mural artist Milan Basic standing in front of his mural that has been spray-painted with “Oil Spill.”  FYI Milan, your mural is part of an effort by the city, the cops, and business owners to stop graffiti, the original street art.

A police raid of an east Vancouver home earlier this week as part of an investigation of anti-pipeline graffiti is being criticized as disproportionate to the alleged crime.
Five people were arrested during the raid, but all were released and no charges have been laid, Vancouver police Const. Brian Montague said Friday.
“I expect that charges will be recommended at some point down the road,” Montague said. “It is linked to an investigation related to the ‘no-pipelines’ tagging we’ve seen around town.”
The raid, however, drew criticism in a blog post on Warrior Publications by author identified only as “Zig Zag.”
The blog said 16 officers raided a house in east Vancouver under the pretext of investigating six mischief charges related to graffiti tags in June, July, and October of 2013, and that four residents of the house and one guest were removed by police “aiming pistols at them.”
The post said the house targeted by the raid “is comprised of radicals involved in Indigenous resistance as well as anarchist projects in the city (including myself, the editor of the Warrior Publications wordpress site).”
It said the five people were placed in a prisoner transport van while a K9 team entered the house to search for any remaining people, and that all were eventually released.
“The last person held was told he would be charged with six counts of mischief under $5,000 and taken away in the prisoner transport van,” the blog added.
“Considering the minor nature of the charges, the raid carried out by the Vancouver police is clearly part of a larger strategy of politically motivated repression against radicals and especially the growing resistance against oil and gas pipelines throughout the province.”
The blog post noted that items taken during the raid included laptop computers, USBs and cellphones, some banners, a video camera and a black hoodie.
However, Montague said there were fewer than 16 officers and that the blog was “colourful and I guess I can describe it as exaggerated.”
He said officers are not required to unnecessarily put themselves at risk and that entering a home is always a high-risk situation.
“There’s always unknowns. For an officer to have a gun drawn at the ready is perfectly acceptable and in line with our policy.”
He noted the five people were taken into custody “without incident.”
In March, mural artist Milan Basic said that while he is no fan of pipelines, he’s also opposed to the activist who three times spray-painted his Commercial Drive mural with anti-pipeline slogans.
“I believe in the message, but he’s ruining his message,” the 43-year-old said at the time as he surveyed the words “Oil Spill” and the anarchist “A” symbol painted in black over his high-profile blue mural at the corner of Fifth Avenue.
“He’s alienating the neighbourhood,” said Basic of the graffiti activist.
“I’m a pacifist at heart, but there’s a part of me that would like to disable the hand that uses the spray can.”
http://www.vancouversun.com/entertainment/Vancouver+police+raid+suspected+anti+pipeline+graffiti+taggers/9915998/story.html