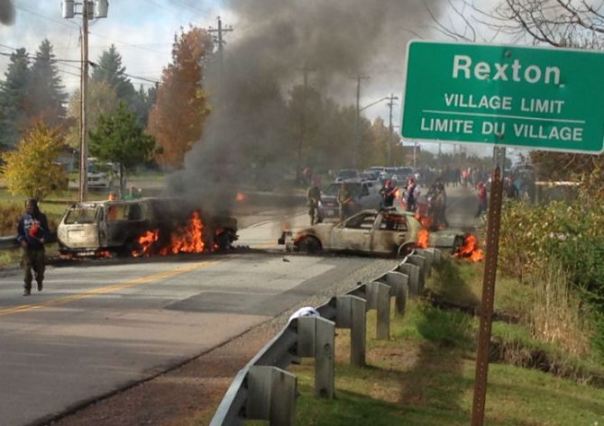 Warrior Publications Note: On the eve of the federal government’s anticipated decision on the Enbridge Northern Gateway, the professional activists, NGOs, and Indian Act band councils that have thus far managed the public opposition to the proposed pipeline project have begun rallying their troops and blowing their battle trumpets.  But the last thing they and their funders want is any kind of confrontation or conflict.  They want it all nice and legal, and one of their biggest fears is that Natives might go all warrior on them, as we saw in New Brunswick with the anti-fracking resistance.

During the anti-Enbridge rally on June 8, 2014, in Vancouver, Geraldine Thomas-Flurer of the Yinka Dene Alliance stated “We don’t want that (conflict) — you see Aboriginal people being portrayed very negatively,” she said, referring to the Elsipogtog Nation’s standoff with police. “For me to see something like that, it’s horrific. That’s not what we want our kids to see. We want our kids to see that we’re all holding hands to stop this in a non-violent way. We want a way that is respectful to the earth and to the people.” 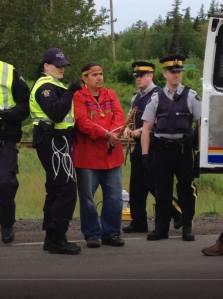 The “peaceful protest” phase: One of 12 people arrested in New Brunswick during anti-fracking protest, June 14, 2013.

As the anti-fracking struggle in New Brunswick has clearly demonstrated, however, it takes more than holding hands to stop the machines.  In fact, many of the people in the early summer of 2013 were holding hands, and getting arrested.  This didn’t stop the exploratory work being carried out by SWN, only the physical blockading of its vehicles in a parking compound did.  And it was for this reason that the RCMP launched a large paramilitary operation on October 17, 2013, in order to dismantle the blockade.

In regards to lawyers “leading” social movements, as the article below discusses, we must remember that lawyers will always tell us what we can’t do.  In that regard, they reinforce the legal system which is ultimately used to control and repress the population.  If the Mi’kmaq had listened to such legal advice, SWN would have carried out their exploratory work in New Brunswick with little significant disruption.

B.C. Civil Liberties Assoc. is giving seminars to pipeline and tanker affected communities on how to keep protests legal

It was a provocative way to open his seminar in Kitimat on keeping a protest “legal.”

“Is there anyone here who is an uncover police officer?” asked Josh Paterson, a lawyer with the B.C. Civil Liberties Association, to the crowd of thirty at a community hall in early April.

Citizens in their chairs glanced at each other awkwardly.  No one responded.

“Police are welcome – this is a public event and it’s just good to know,” he added.

Paterson then spoke over projector slides on what to do if arrested at a rally or protest site, and how to keep police accountable for transgressions.  Writing down badge numbers, and having a camera handy are among his many tips.

“You have a right to photo or video police, but you can’t get so close that you are interfering,” he advised.

Paterson has given his talk to several northern communities at their requests in recent weeks, and insists the locations were not designed.  But all of them were in pipeline and tanker-affected communities.  From Haida Gwaii to Fort St. James, his talks have been hungrily received.

Perhaps that’s because many feel the Harper government may approve the Northern Gateway project any day now, even though large numbers of northern citizens are deeply opposed to the $6 billion project.  Kitimat, for instance, voted decisively against the project in an April plebiscite.

“I gather by the buttons in the room that some of you have a particular point of view on a resource project?” asked Paterson at the Kitimat seminar, to laughs from the room.

But another reason for concern: recent police clashes in Canada over petroleum projects have turned violent.

In New Brunswick last October, a protest against a gas company’s plans to do seismic testing for fracking descended into anarchy: six police cruiser were lit on fire, guns were seized from a protest camp, and tear gas was used to pacify a mostly Aboriginal crowd.  Police were trying to enforce a court injunction, to allow the industrial activity to proceed.

Many native people across Canada have said they feel their rights and title are being trampled on to expedite oil and gas projects.

That sentiment is echoed in B.C., where Aboriginal leaders have been vowing for months to stop the construction of Northern Gateway by any means necessary – in court, but also by standing in front of the bulldozers.

Louie’s band, is one of six that form the Yinka Dene Alliance, which has “banned” the Northern Gateway project.

“If they think they’re going to start up the bulldozers, ploughing a swath through the middle of British Columbia to put this pipeline in, they’ll be people there to stop them on the ground.  It’s that simple,” said Sterritt, last week.

Where is all this heading?  Nobody knows.  But the RCMP and Canadian Security Intelligence Service (CSIS) are watching.

Recent freedom of information document disclosures have revealed that both federal authorities are monitoring pipeline-opponent groups.  The BCCLA has filed public complaints in court over these concerns.

“We say that the gathering of all that information without a warrant without any kind of judicial control or oversight or parliamentary oversight is unconstitutional,” said Paterson.

Still, critical energy infrastructure needs police protection from known threats.  Companies have the right to have their property safeguarded.

And CSIS’s website says extremists from environmental groups “are willing to use dangerous and violent tactics in the fight for their cause.”

Arson attacks are listed by CSIS as one such example. Encana knows about that all too well.  The gas company giant had its pipelines bombed six years ago in northeast B.C. in the Dawson Creek area.  Nobody yet has been brought to justice for the crimes, according to an Encana media spokesperson who was reached Friday.

The RCMP also stress their job is to be an impartial in any protest or disagreement.

“The RCMP is here to uphold the law, maintain the public peace and ensure safety for all parties, including the protesters.  If the protest is no longer peaceful or lawful the police will need to mitigate the circumstances,” wrote B.C. spokesperson Sgt. Rob Vermeulen on Friday.

For its part, Enbridge did not respond a request for comment.

To cool the temperature, and prevent protests from getting ugly, Paterson offers simple advice: obey the law, know your rights.

“We don’t condone or advocate to take any particular action.  What we would advise is what their legal rights are.  And that they have a clear understanding of what the legal consequences are of taking their actions.  That’s what our program is about.”