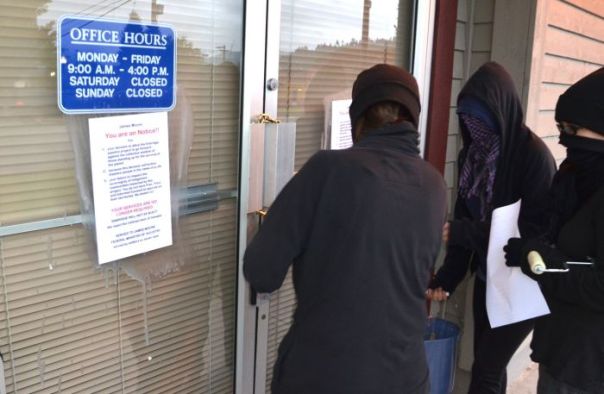 Chains and padlocks greeted workers at the constituency offices of two B.C. Conservative MPs Tuesday, as opponents of the Enbridge Northern Gateway pipeline called for the politicians to “vacate their posts.”

The Port Moody office of Industry Minister James Moore and the North Van office of MP Andrew Saxton were targeted by a citizens’ group calling itself “Settlers on Stolen Land.”

The protesters locked the doors and posted notices on the office windows that outlined three reasons for their actions:

The decision is contingent on Enbridge satisfying 209 conditions set out by a federal review panel and embarking on more consultations with affected aboriginal communities.

“Settlers on Stolen Land recognizes the approval of the Northern Gateway Pipeline as a clear example of environmental racism which continues the Canadian legacy of colonization,” claimed the group on Tuesday. It promised to return to the MPs’ offices on July 7 as part of the planned “Nations United Against Pipelines Day of Action.”

The Huffington Post B.C. is waiting for a response from Saxton and Moore’s offices.