‘A killer walks amongst us’: TIB chief warns women to be careful 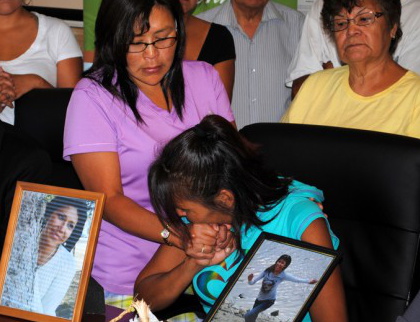 Shirley Paul (right), mother of Samantha Paul, is consoled by her sister Joyce Paul, during a press conference at the Tk’emlups Indian Band offices on Monday, Aug. 11.

Local First Nations leaders are urging vigilance and asking for help after a skull found south of Barnhartvale in June was determined last week to be that of missing native women Samantha Paul.

“We call upon the public and urge people to come forward and speak up if they know anything about the disappearance of Samantha,” Tk’emlups Indian Band Chief Shane Gottfriedson said at a press conference on Monday, Aug. 11.

“Our community is small and it’s heart-wrenching and appalling to know a killer walks amongst us today.

“We cannot accept violence against or amongst our people, especially our women.”

In June, a skull was found near White Lake, about 15 kilometres south of Barnhartvale. DNA testing has since determined it is that of Paul.

Police have not said publicly whether she was murdered, only that foul play cannot be ruled out — but, Gottfriedson said, the evidence speaks for itself.

“In our hearts, we know that she was murdered and that foul play was the cause of death,” he said.

“We’re very, very concerned of the dismemberment of the remains of Samantha in an area she’s not known to be around. 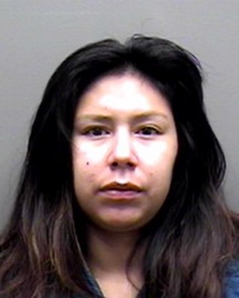 “When her skull is in one spot and they can’t find the rest of her body, I guarantee that’s foul play.”

Paul’s relatives were present at the press conference.

Her mother, Shirley Paul, was too emotional to speak, but Joyce, Shirley’s sister, offered a few tearful words.

“We want proper closure,” she said.

“This is not an easy process.”

An exhaustive police search of the White Lake area last week turned up additional remains, though investigators have not stated what they found. RCMP Cpl. Cheryl Bush said the investigation is ongoing.

At the time of Paul’s disappearance, police described her lifestyle as “vulnerable,” and it’s believed she was a sex-trade worker.

She is the fourth unsolved missing or murdered woman in Kamloops in the last decade.

Shana Labatte, Sheri Lee Hiltz and Cassandra Wilson were all also known to work in the sex trade.

Labatte’s body was found in Mission Flats in March 2004, and Hiltz’s severely beaten remains were located behind a Surrey Avenue home 11 months later.

Wilson vanished in April 2012. Her remains have not been located, but police have said they believe she was murdered.

“It just makes us sick to think that there is a killer walking amongst us,” he said.

“Be careful out there. There’s somebody walking out there who’s a killer.”

Lack of inquiry a ‘national disgrace’

British Columbia’s top-ranking First Nations chief says Samantha Paul’s death is the latest example of why the federal government should hold an inquiry looking into missing and murdered native women.

Grand Chief Stewart Phillip, president of the Union of B.C. Indian Chiefs, said native women are seven times more likely than non-natives to die as a result of foul play.

“We are absolutely outraged the Harper government continues to refuse to call a national public inquiry.”

Phillip has been trying to bring about such an inquiry for more than two years.

David Walkem, chief of the Cook’s Ferry Indian Band, which counts two of Paul’s sisters as band members, said an inquiry is necessary given the history of First Nations women going missing and/or being murdered in Canada.

“We need action. We cannot have our girls subject to this kind of treatment.”