Review of the ESEE Izula Knife

For those that don’t know, ESEE is a knife manufacturer based in the US that also conducts survival training courses. As part of their training regime, they eventually began designing knives that were initially produced by Ontario Knife Company (the RAT series, RAT standing for Randall’s Adventure Training). In 2007, when their contract with Ontario ended, ESEE began producing their own line of field knives, ranging from small utility blades to large machete type knives. ESEE (pronounced “ess-ee”) stands for Escuela de Supervivencia (School of Survival), Escape and Evasion (ESEE), and is derived from their South American jungle training courses (including military and law enforcement agencies). The ESEE knives are manufactured in Idaho Falls, Idaho, by Rowen Manufacturing.

The Izula knife is a very popular small, sturdy fixed-blade knife produced by ESEE. The name Izula comes from Peru and is used to describe the Bullet Ant found in South American jungles (a logo of the ant is laser engraved onto the knife blade). The knife has an overall length of 6.25 inches with a short, stout 2.63 inch blade that is .185 inch thick (about 4mm). The blade is around 1 inch wide just forward of the handle before curving up to a drop point. The entire knife is coated in a black powder coating, with a small amount of exposed steel on the knife’s edge, the grind of which is a full flat grind with a small bevel edge. The 1095 carbon steel version appears to be the most common, although ESEE also produces a 440C stainless steel version. The Izula costs about $70. I have the carbon steel version, a gift from a good friend.

The Izula is a compact and sturdy knife.

The tang of the knife is skeletonized, and the primary handle used is a paracord wrap around the tang. There are also Micarta handles available, and many people modify their Izulas with wood or other types of handles. There is a small 15mm section of jimping on the spine just in front of the handle section. 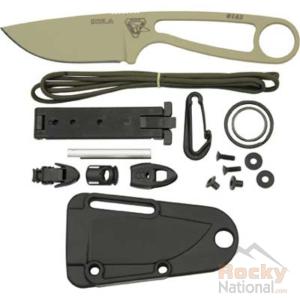 A tan coloured Izula with the contents of the package included with the Izula and showing the skeletonized tang handle.

The Izula comes with a small package consisting of a section of paracord, an emergency whistle, a ferro and magnesium rod, snap hook, and cord lock, as well as screws for attaching the belt clip to the sheath.

The sheath is a hard plastic type that has a variety of mounting options, including the belt clip that locks in place. The blade tightly friction fits into the sheath and requires no other retention methods, such as straps.

There is also a revised version called the Izula II, the only difference being that the Izula II has a half inch longer handle than the Izula.

I’ve had the Izula for a couple of years now, and to be honest it is not my primary everyday carry knife. It’s not even a secondary one. The hard plastic sheath is uncomfortable to wear every day, especially with the belt clip, and the tight friction fit of the blade into the sheath makes it difficult to pull out unless you use your thumb. But unfortunately there really isn’t a thumb catch, instead the sheath is just rounded where your thumb would be placed when drawing the knife. In addition, when using the belt clip, you can’t grasp the handle completely when drawing it as the clip is in the way. 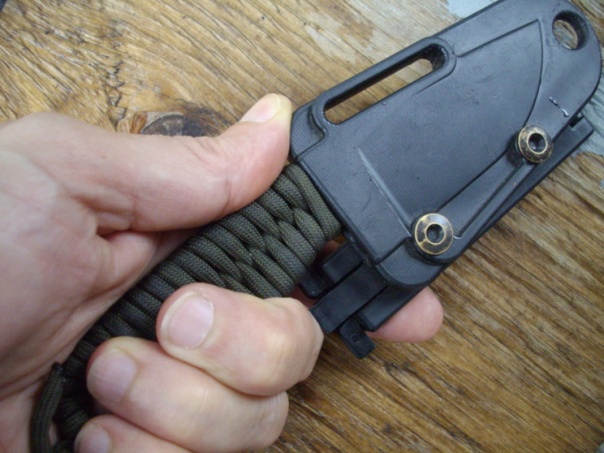 Here you can see the small rounded corner that your thumb needs to push off of when drawing the knife, as well as the belt clip in the way.

As for the knife itself, I find it less than ideal in terms of its overall design. The thick blade and the angle of the edge grind doesn’t make it a very good knife for carving wood, one of the main purposes of a field knife, in my opinion. It doesn’t bite into wood like a Scandi grind, and while you can make feather sticks with the Izula, it’s not as easy as using one of my Mora knives (which have a Scandi grind). One fairly common modification users make is to increase the angle of the grind, usually by adding a convex edge. This is something I may try in the future if I decide to keep it.

Making small feather shavings with the Izula on left and a Mora on the right.  The Mora’s Scandi grind was able to easily produce curled shavings while the Izula’s curls are significantly shorter due to its full flat grind and blade thickness.  This technique is good for fire starting using the feather stick.

Another feature that I don’t like on the Izula, however, is the thumb jimping on the spine (small grooves machined into the spine designed to provide a better grip for your thumb, in theory). Although it’s rounded, the jimping still digs into my thumb when I’m carving. For this reason I prefer knives without jimping.

The jimping on the spine of the blade is uncomfortable to carve with.  Here you can also see the 4mm thickness of the blade.

For fire lighting, although it comes with a small ferro rod, the Izula clearly wasn’t designed to be used for striking a ferro rod (an option I prefer) unless you were willing to use the exposed steel on the knife’s edge, which can weaken it due to the extreme heat produced by the ferro rod. To use the spine for striking the ferro rod, the black powder coating would have to be removed from a section of the spine, and then sharpened. But the powder coating, especially on the carbon steel versions, is important in protecting the steel against rust and corrosion. And since I live in a rain forest, the last thing I want to do is degrade the ability of the carbon steel to resist rust. 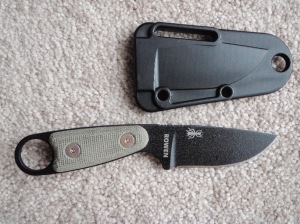 Izula with a Micarta handle.

Overall, I like the form of the knife and it feels good in the hand, but the full flat grind combined with the thickness of the blade means it is less than ideal for carving. The jimping on the spine further reduces its carving ability. The hard plastic sheath is just uncomfortable to wear for any period of time. And for the $70 ESEE charges for the Izula, I could buy knives much better suited to my needs.