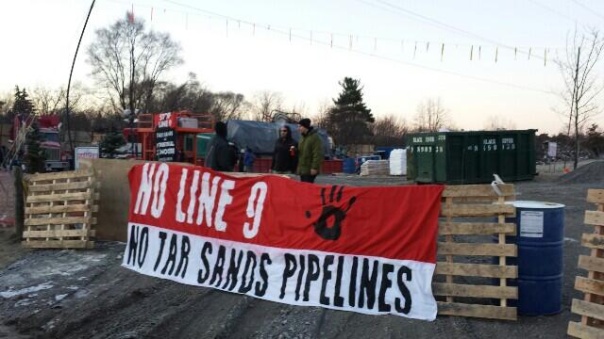 The federal government has been monitoring public protests and demonstrations in Hamilton since 2007, including several Enbridge related events, according to new documents released this week.

The Government Operations Centre, which prepares Ottawa’s response to emergencies, collected reports from seven protests in the Hamilton area in recent years that caught the federal government’s attention.

According to the documents, some stemmed from media reports, but others were collected by the RCMP and Aboriginal Affairs and Northern Development Canada.

There were around 800 public demonstrations across Canada and abroad mentioned in the documents. Here are the ones from Hamilton:

Nova Scotia Liberal MP Scott Brison requested the data from Public Safety because he’d heard anecdotally about the federal government’s extensive monitoring practices, he told CBC Hamilton. “But we were still surprised by the breadth and scope of the government’s activity.”

There’s a difference between legitimate surveillance in the name of public safety and “spying on NGOs and groups who are on the Conservative’s enemy list,” Brison said. “It seems that indigenous and environmental organizations are of particular interest to the government.”

“If the government actually met with and engaged with these people, it would know what they’re thinking and wouldn’t have to spy on them.”

In an emailed statement, public safety spokesperson Zarah Malik told CBC Hamilton the Government Operations Centre has to maintain awareness on a “wide range of issues” that could affect the Canadians’ safety at home and overseas.

“The GOC works closely with its partners to continuously improve its awareness of events that may affect national interest,” Malik said. “The GOC does not conduct surveillance operations, does not conduct intelligence gathering and does not obtain or hold any private or personal information pertaining to Canadian citizens.”

“The Government of Canada respects the privacy of Canadians and their right to peaceful protest.”

One of the protests noted by the government took place at an Enbridge pumping site in rural Hamilton last June. A six-day occupation ended when 18 protesters were arrested at the site.

Activist Ken Stone, who has taken part in several protests and demonstrations against Enbridge in Hamilton, condemned the government’s actions. “I think it’s reprehensible that our government is using our tax dollars to survey us during perfectly legal political protests,” he said.

Stone says he isn’t surprised that the activities of protest groups in Hamilton are being monitored, however. Stone himself has been visited by CSIS agents. “We know our phones are being tapped and our emails are being read.”

“Our rights are being squeezed thinner and thinner all the time.”

Activist Elysia Petrone, who has also participated in Enbridge protests in the Hamilton area, told CBC Hamilton that she’s wondering to what extent the government is monitoring protests and protesters. “People can go ahead and read my emails — they’re boring,” she said.

“But I think the fact that they’re wasting tax dollars on this is disgusting.”