← CSIS powers beefed up under new bill tabled by Steven Blaney
This is what they’re doing to clean up the worst mining disaster in Canadian history. → 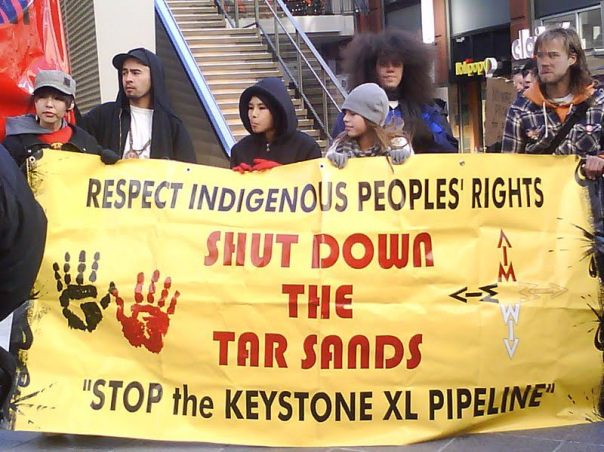 “It changes the narrative quite a bit,” Anthony Swift, an international lawyer at the Natural Resources Defense Council in Washington, said of the tumble in crude prices.

The pace of oil-sands production is key in the debate over Keystone, a Canada-to-U.S. line TransCanada Corp. proposed in September 2008 when oil was more than $100 a barrel.

Environmentalists oppose developing oil sands because the process releases more greenhouse gases than other types of crude. President Barack Obama has said he won’t approve the $10 billion project if it would significantly exacerbate carbon pollution. It only would do that if it promotes more oil sands production.

An environmental analysis released by the State Department said oil prices would have to fall to $75 a barrel for Keystone XL to affect development of Canadian heavy crude. The report said higher transportation costs might have a “substantial impact on oil sands production levels” at that price, a scenario they deemed as unlikely.

When crude prices are higher, producers would find another way to get the heavy, tar-like bitumen delivered to refiners — by trains, for example — even if Obama blocked the link, a January environmental assessment from the department said. The State Department is overseeing the review because the pipeline would cross an international border.

Now that prices are lower, environmental groups are renewing their argument that Keystone is a linchpin to oil-sands development and rail isn’t a reliable option. At the very least, they say, the tumble shows the State Department’s assumptions aren’t reliable.

Kevin Book, an analyst at ClearView Energy Partners in Washington, said falling oil prices may help environmentalists make a case that alternatives like rail, which cost more, aren’t viable. But he called the current price drop a “blip” that probably won’t affect the U.S. review of Keystone.

“I don’t believe you have too many people making the case that oil is going to fall in the $70 range and stay there for five years,” Book said in an interview.

Some analyses predict a rebound, and the State Department said its assumptions are based on long-term price models not short-term swings. For this year, crude reached $107.26 on June 20, and fell to $80.52 on Oct. 22 — the lowest since late June 2012.

Bank of America Corp. predicts West Texas Intermediate could fall as low as $75 a barrel in the next three months, according to an Oct. 23 note.

Philipp Chladek, an analyst for Bloomberg Intelligence, said the Organization of Petroleum Exporting Countries is likely to cut production to avoid a further fall in prices.

“My conviction is that if OPEC doesn’t cut, they’re signaling they’re OK with a low oil price, this could really get things going,” he said in an e-mail.

Environmental groups tie their opposition to research showing the production and refining of the oil sands releases more carbon dioxide than conventional oil. They call Keystone a threat to the climate.

Keystone could add the equivalent of as much as 27.4 million metric tons of carbon dioxide a year over what a less- carbon intensive type of oil would release. The pipeline’s carbon is equal to emissions from about 5.7 million cars or 7.8 coal-fired power plants, the State Department said.

A 2013 draft environmental review concluded Keystone “is unlikely to have a substantial impact on the rate of development in the oil sands.”

The NRDC, the Sierra Club, National Wildlife Federation and other groups lobbied the department to remove that statement, urging officials to account for rail’s higher cost.

Shawn Howard, a spokesman for TransCanada, said the Calgary-based pipeline builder has commitments from the oil sands producers to ship using Keystone XL, showing their confidence that the market is sustainable.

“They don’t build projects like this on short-term prices, it’s with a long-term view in mind,” Howard said in an interview.

“Project cancellations like this are tangible proof that delays on pipeline projects like Keystone lead to real reductions in tar sands investment and associated carbon pollution,” six environmental groups, including NRDC, National Wildlife Federation and the Sierra Club, said in a statement.

Statoil said it allocates money to its most competitive projects. “We have never booked or planned for capacity in Keystone XL for Corner,” spokesman Knut Rostad said by e-mail. “The postponement of Keystone was thus in no way directly related to our decision.”

← CSIS powers beefed up under new bill tabled by Steven Blaney
This is what they’re doing to clean up the worst mining disaster in Canadian history. →