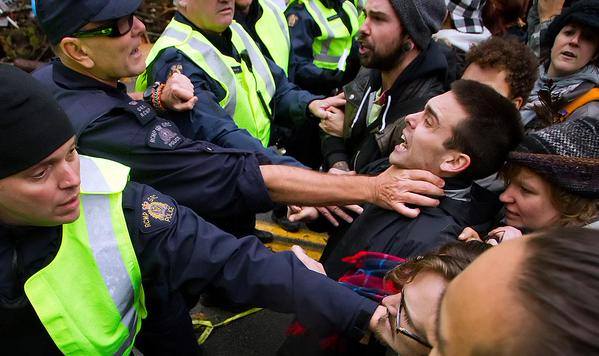 Since November 20, 2014, there have been scores of police on Burnaby Mountain, enforcing a court injunction prohibiting people from interfering with Kinder Morgan’s drilling of bore holes.  As of Nov 23, there have been over 60 arrests.  While the majority of these have been symbolic “voluntary arrests,” some have been the result of aggressive police actions during their crowd control activities.

Most of the cops we see on Burnaby Mountain are from the RCMP’s Lower Mainland District Integrated Tactical Troop, which includes members from other police agencies throughout the region.  According to the RCMP, there are 130 members of this tactical troop, which are the RCMP’s version of crowd control units.

At the present time, the tactical troop on Burnaby Mountain has been deployed in what is referred to as “soft tac” mode, which is comprised of a cap, tactical uniform, and reflective vest.  This is done when the threat level of the crowd is considered low.  When there is a greater potential for conflict, the police will deploy in their “hard tac” gear which includes body armour, helmets, shields, gas masks, and riot batons.

The Lower Mainland District Integrated Tactical Troop is involved in the following:

Each of the police officers on this team volunteer to perform these functions when needed. The team assists other units in the Lower Mainland and has been involved in major operations within the province and throughout Canada, when necessary. Some of these operations include the Okanagan Mountain Park fire in 2003 and the G8/G20 Summit in Ontario in 2010. The team has also assisted the Vancouver Police Department with the Stanley Cup Riot in 2011.