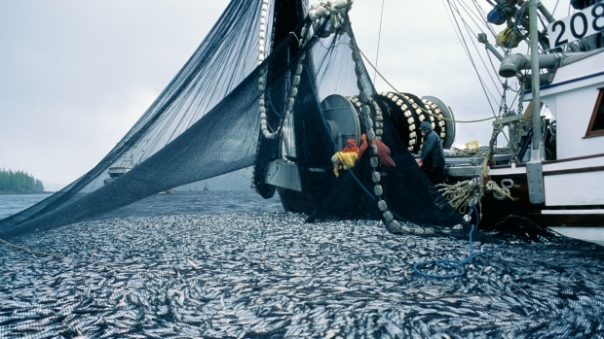 A fishing boat pulls in a net full of herring on the Central Coast of B.C. (Heiltsuk First Nation)

According to a statement released by the Heiltsuk, just before 5 p.m. PT, the federal department opened the herring sac roe seine fishery in Spiller Channel, despite the First Nation’s demands the commercial fishery remain closed this year to preserve herring stocks.

Last week the Heiltsuk declared a tribal ban on commercial sac roe fishing in all of Area 7, including Spiller Channel where the fishery was opened on Sunday.

The First Nation said fisheries officials only told them about the opening half and hour after it began on Sunday.

“DFO provided inconsistent and misleading communications throughout the day and did not attempt meaningful consultation,” said Slett.

The First Nation is vowing to fight any further openings.

“We must put conservation first. We have voluntarily suspended our community-owned commercial gillnet herring licenses for this season to allow stocks to rebuild, but DFO and industry are unwilling to follow suit,” said Kelly Brown, director of the Heiltsuk Integrated Resource Management Department, in a statement released on Monday morning.

“DFO continues to have dialogue with the members of the local First Nations. DFO Conversation and Protection Officers have been speaking with commercial harvesters on the water to ensure the fishery is conducted in a sustainable and orderly manner,” he wrote in an e-mail to the Canadian Press.

“DFO respects the right to protest, however we condemn any threat of violence or reprisal against those exercising their right to practice a lawful and sustainable fishery.”

Greg Thomas, the chair of the Herring Industry Advisory Board, said there are plenty of fish and if there is a Heiltsuk blockade, he expects police to intervene,  but adds that the board prefers to negotiate an agreement.

But the Heiltsuk claim herring stocks are on the verge of collapse.

In the meantime the First Nation is working with its own team of advisors to establish its own measure of how Pacific herring stocks are doing in B.C. waters.

The Heiltsuk Nation is the latest aboriginal band to speak out with warnings of perilously low stock numbers in a long-standing battle against the reopening of commercial herring fisheries.

The Haida Nation recently won an injunction to block a planned fishery, after joining two other First Nations to fight a fishery’s reopening last year.