Rally for justice for Cindy Gladue in Toronto, April 2, 2015.

Canadians came together Thursday to protest the acquittal of the man accused of murdering Cindy Gladue, an aboriginal woman from Edmonton.

Protests were planned across the country, and thousands of people turned out to send the message that aboriginal lives matter.

Hours before the protests, Alberta prosecutors announced they will appeal the acquittal of Ontario trucker Bradley Barton, who was charged with Gladue’s slaying. A jury found him not guilty in March of first-degree murder.

The 36-year-old prostitute bled to death in a motel bathtub in 2011.

Thursday’s protests were staged in 15 Canadian cities from Victoria to St. John’s; #JusticeForCindyGladue was also trending on Twitter. 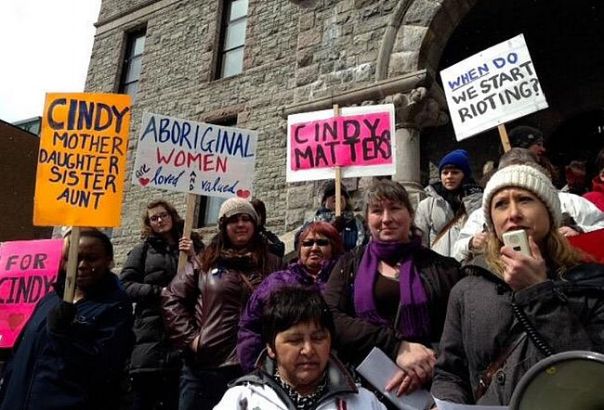 By Trevor Robb, Edmonton Sun, April 2, 2015
The sounds of drums and chants filled the air as a large group of irate protesters took to the streets of downtown Edmonton Thursday afternoon demanding justice in the brutal killing of a local sex-trade worker.Hundreds of people gathered outside the Edmonton courthouse, including First Nations chief’s from across the province, to speak out against the killing of Cindy Gladue, 36, who was found dead at the Yellowhead Inn in Edmonton on June 23, 2011, in a bathtub covered in blood. 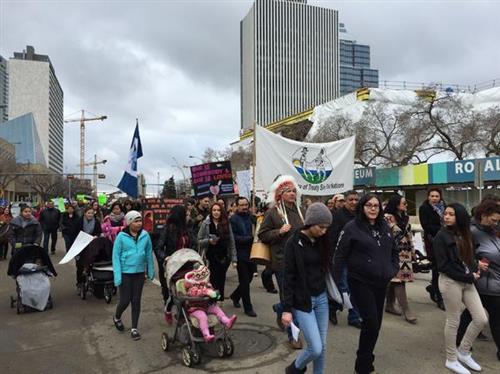 On March 18, following a month-long trial, a jury of nine men and two women found Ontario truck driver, Brad Barton, 46, not guilty of first-degree murder, as well as not guilty of manslaughter, in the killing of Gladue.

“I don’t see how the jurors can go to bed at night after they saw all the graphic pictures – it’s beyond me,” said Vivian Risby, aunt of Gladue. “They’re letting a killer walk free.”

“It was shocking and appalling to get that kind of verdict,” added Cold Lake First Nation’s Chief, Bernice Martial. “Today, I stand up for Cindy and all the others who have died in horrendous ways.”

“It shows that we stand in solidarity today. To work with one another and to hear our voices. It’s about time we started hearing our voices – the woman’s voice and the people’s voice – of what is happening with the court system here in Alberta and across Canada,” said Martial. 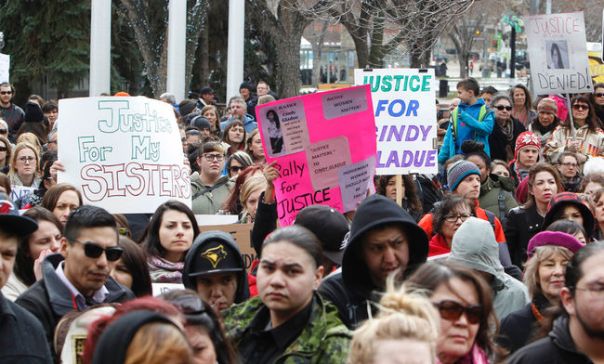 “We want equal rights. We want justice to be done, not injustice done towards our people.”

Just hours before the protest began, news broke that the Crown is appealing Barton’s acquittal.

“This is great news,” said Martial, who admitted she just found out about the appeal minutes before she joined the march.

An RCMP report released May 16, 2014, identified 1,017 aboriginal women and girls murdered between 1980 and 2012 — a homicide rate 4.5 times greater than the general female population.

“This seems to be a non-issue with the Government of Canada. Guaranteed, if the current government had its own way they would never make this an issue. They wouldn’t want to deal with it because they’re scared, they’re scared of the truth,” said Courtoreille, who went on to liken Canada’s relationship with First Nations people to that of the recent tensions in the United States between law enforcement and members of the African-American community.

“Enough is enough. We can’t keep doing this. What is happening across the border, with the black people rioting, that’s the last thing we want to do but if we keep being oppressed and not having a voice then you’re going to bring the worst out in people.

“It’s not what we want, we want nothing but fairness and equality in this country.”

The protest wrapped up at the steps of City Hall and Churchill Square with a gathering of drummers and singers.