← Chile: Mapuche Political Prisoners on Hunger Strike in Angol Prison
Voice for the Voiceless: Standing up for St’át’imc cultural heritage and traditional way of life. →

Dozens of riot police and City of Perth rangers have again moved into dismantle an Aboriginal camp at Heirisson Island, set up in response to the State Government’s plan to close remote communities.

Officers began dismantling the camp just after 11:00 am, pulling down tents and issuing move on notices.

The tents, as well as residents’ belongings, were confiscated. 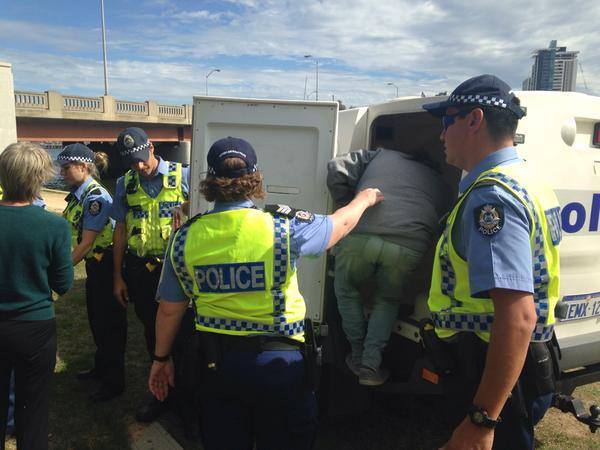 There were angry scenes as a man and two women were arrested, and several others were issued with move on notices.

Activist Gerry Georgatos said there had been 41 tents on the island last night, housing about 100 people including several family groups.

He said the protest was about homelessness, as well as the closure of remote communities.

“This is an indictment on the city of Perth,” he said.

“There were 41 tents pitched there, there were a lot of large families who would otherwise be vulnerable on the streets.”

“We saw the police coming, there seemed to be 100 or more, all the vans came, and they came in riot stuff … and they went to pull the tents down,” she said.

“One police woman was trying to push me away, and then suddenly, this big policeman came like a bull and grabbed me by my shoulder.

“They’re the violent ones, they are the criminals.

“This is our land – when I was a young girl I used to come prawning along here.”

The camp was set up early last month in protest at plans to close up to 150 Aboriginal communities, judged by the Government to be unsustainable.

Police and the City of Perth removed camping equipment from the site last month, but the camp has gradually reassembled since then.

The Commonwealth provided funding for about two thirds of the state’s Aboriginal settlements with the WA Government funding the balance.

But the Commonwealth has withdrawn its funding, and is handing over responsibility to the State Government over the next two years.

One town likely to be spared the axe

Meanwhile, Mr Barnett met with residents of the Warralong community during a trip to the Pilbara yesterday.

He told the roughly 100 residents a larger community like Warralong could one day become a gazetted town, implying it was unlikely to be closed.

“Other communities I think need to have a viable population number, but I’m not putting a figure on that,” he told ABC North West.

“I think many Aboriginal people and Aboriginal leaders have been willing to discuss this and some of them realise the system does need to change.

“There’s a lot of talk, but if you look at school attendance, health, education achievements and particularly opportunities for employment, they are very limited and sometimes nonexistent in many Aboriginal communities.

“There are 274 remote communities in Western Australia and I think most fair-minded people don’t believe that is viable in the long term.”

Mr Barnett denounced rumours spreading in Warralong and other communities that heavy-handed measures would be used to remove Aboriginal people from their traditional lands.

“I would invite them to stop doing that and actually be part of improving the communities.”

Mr Barnett said work to establish a consultation and evaluation framework for the communities was ongoing.

“There’s going to be no sudden change, there’s no hit list of communities to be closed,” he said.

“We’re just going to progressively work with Aboriginal people and local government to try and improve what we have, but yes, at the end of the day I expect there will be significantly less Aboriginal communities into the future.”

← Chile: Mapuche Political Prisoners on Hunger Strike in Angol Prison
Voice for the Voiceless: Standing up for St’át’imc cultural heritage and traditional way of life. →