Chile: Two Arson Attacks on Logging Trucks in the Province of Arauco, Wallmapu 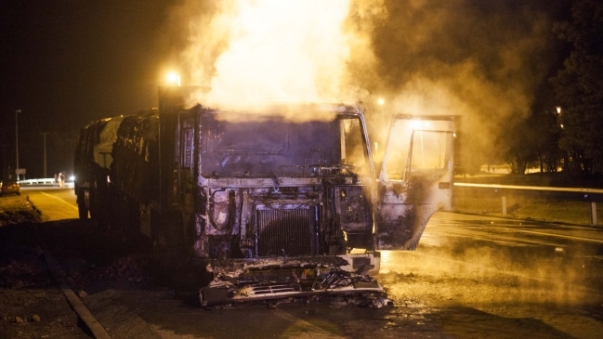 by The Women’s Coordinating Committee for a Free Wallmapu [Toronto], May 15, 2015

Two arson attacks were carried out early Thursday morning at various points in the Araucania Region.

The first took place in at the Mariposas Estate, located on Highway CH181that connects the townships of Curacautín with Victoria, in the Province of Malleco.

According to police reports, the unknown suspects entered the area and lit fire to a shed that contained logging equipment.

Guards confronted the suspects, which gave way to shots being fired, although police assert there were no injuries reported.

Due to the incident a tractor, as well as an excavator, were completely destroyed.

Meanwhile, the other incident took place in an area of Mininco, on Highway 5 South, at the northern exit of the Araucania Region.

It was there that three logging trucks and a pedestrian lookout post were burnt down, and police are investigating on the scene.

Close to 20 armed hooded suspects forced out the truck drivers to complete the attack, and the fire reached the nearby look-out post, according to witnesses.

During the morning hours, the Provincial Prosecutor, Luis Espinoza, stated that they would work with investigators and local police to search for clues in connection to two other similar incidents in the townships of Caracautín and Victoria.

“The attacks were simultaneous, which provoked the arson of three trucks and a look-out pedestrian post. It was a coordinated attack, dividing themselves between the trucks, and intimidating the drivers with long and short firearms,” alleged the prosecutor.

The local Government representative of the Araucania Region, Mario Gonzalez, stated that there would be charges against those responsible for the incidents.

“We are investigating the incidents with the arson of these trucks and the look-out posts to come up with possible charges,” stated the representative.

“Everyone rejects these actions that do not favour the development of the region,” added Gonzalez.

In the area, pamphlets related to the Mapuche land conflict were found, stating the freedom of [Mapuche Political Prisoner] Patricio Queipul.

Distributed by: The Women’s Coordinating Committee for a Free Wallmapu [Toronto]