Sept 12, 2015, the drilling vessel Quin Delta (contracted out of Gregg Marine in California by Petronas/PNW LNG and Prince Rupert Port Authority) attempted to drill in Agnew Bank but was turned back by members of Lax Kw’alaams members. Photo: Facebook.

Update #2 from Lax Eula (Lelu Island):
September 13, 2015
This morning unauthorized Stantec surveyors working for Petronas/PNW LNG were found conducting operations on the FLORA BANK. They were informed that they were not permitted on or around Lax Eula, and no surveying had been approved by the Gitwilgyoots. They left, but attempted to return to Flora on the Glacial Mist charter boat at approximately 1pm. They were intercepted by one of our camp skiffs and were informed again that they were not permitted to conduct work on this territory.
The Prince Rupert Port Authority boat Charles Hayes then came to support the surveyors, and the Port Authority was also informed that all drilling and surveying must cease. The Glacial Mist stood down and turned back to Port Edward. However, the drill-boat Quin Delta remained stuck on Agnew Bank due to mechanical failure until mid-afternoon, when it left the area as we had instructed yesterday morning. 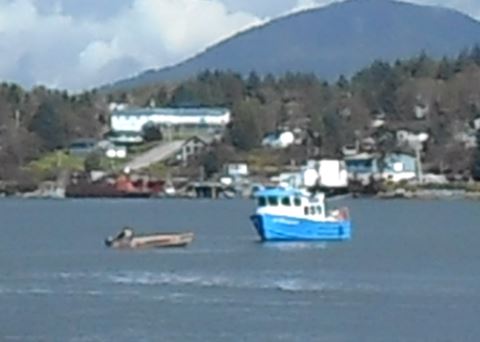 * The photograph is of a 12 foot skiff turning away the Glacial Mist charter carrying unauthorized surveyors. Photo: Facebook.

Tomorrow morning contractors for Petronas are expected to attempt work for a third day. We are looking for boats! If one tiny 12 foot skiff can turn away surveyors and protect the delicate salmon habitat of the Flora Bank which supports nations and families all along the Skeena, imagine what 2, 5, or 10 can do. We need boats and people with strong spirits and hearts. Thank you to everybody who has come out to the island, donated food and supplies, and shown support and solidarity in different ways. Together we will save the Skeena!

September 12, at approximately 7am, the drilling vessel Quin Delta (contracted out of Gregg Marine in California by Petronas/PNW LNG and Prince Rupert Port Authority) attempted to drill in Agnew Bank, on the northwest edge of Flora Bank. Gitwilgyoots members of the Lax Eula (Lelu Island) occupation camp approached the workers on the vessel to explain that no drilling has been permitted and that all drilling activities must cease. The workers on the vessel then desisted from drilling. However, a barge pulled by the tugboat Cadal from Wainwright Marine Services out of Prince Rupert dropped markers in the water to prepare for further unauthorized work. Throughout the day the Quin Delta then attempted to remove equipment that had been installed in the ocean floor, requiring the use of a bucket-loader on a barge and a crane barge. Both attempts were unsuccessful due to mechanical failure. Prince Rupert Port Authority and other contractor and surveyor boats shuttled back and forth throughout the day as well, using the Glacial Mist Water Taxi out of Trend Marine Services in Prince Rupert. As of 9pm the vessel and equipment still appear to be immobilized on the bank due to mechanical failure.

While this was happening on the water, over 30 people came out from many different nations to show their support for defense of Lax Eula. Amongst these were Gitxsan hereditary chiefs who came from Madii Lii and surrounding areas to show support and share their experiences fighting the pipeline upriver. We are building friendships and solidarity across the entire Skeena watershed.

We expect the drilling boat to attempt work on the bank again tomorrow. We continue to need additional boats on the water, and people on the island, as we have been told that helicopters may attempt to land for on-island drilling.