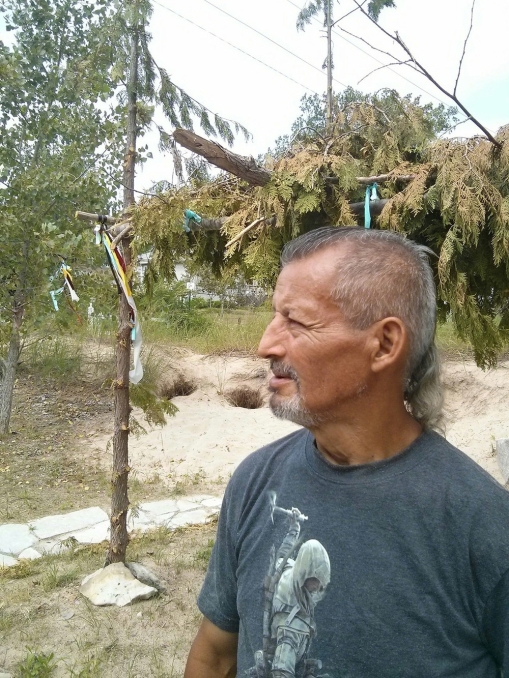 The day after he was engulfed in flames during a demonstration at Stony Point, Pierre George joked he was “a little crispy,” but otherwise feeling well.

“I just got burns on my hands and my eyes, skin coming off . . . and (the fire) burnt my mohawk,” said George, reached Monday by phone in a Sarnia hospital where he was recovering in the intensive care unit.

George, 61, is the brother of Dudley George, the native protester shot dead by an OPP officer during the 1995 Ipperwash standoff 20 years ago.

Pierre George and some other Stony Point band members ignited a fire Sunday inside the gates of the former Camp Ipperwash to protest the return of the former federal army camp to the Kettle and Stony Point First Nation.

The federal government appropriated land in 1942 for the camp during the Second World War. The land is being returned by Ottawa as part of a more than $90-million settlement with the Chippewas of Kettle and Stony Point First Nation, a band whose members ratified the deal last week.

But George and some other Stony Pointers who have been occupying the land for the last two decades are opposed to the deal, saying the land should be returned only to those who were forced off of it under the War Measures Act.

So as members from the reserve marched Sunday down the highway toward Stony Point in what they called a “Going Home Walk,” George and some others started a fire to let them know they weren’t welcome.

Video footage of the incident captures another demonstrator kicking a gasoline can toward the fire and that’s when the fire spread to George’s shirt.

“He kicked the can, (the gasoline) sprayed out and the flames just followed,” he said.

“All I know is, I went up in flames, just like that them flames came up the front of me. So I started ripping my shirt off from the front, then my son, Lakota, he grabbed the back and pulled it off,” he said.

Photos of George screaming in pain as flames shot from his shirt were published on the front pages of newspapers on Monday and posted on media websites, drawing attention to the rift among natives.

While catching fire wasn’t part of the original plan, George said he’s glad to see people outside his community are paying attention to an issue that is so important to those within it.

“All this stuff is boiling out from that land deal,” he said.

“That’s our land. My dad was born there.”

Lambton OPP Const. Travis Parsons said Monday officers are reviewing evidence and talking to witnesses to determine if charges will be laid.