Four Alaska Native men hoping to be exonerated of the 1997 beating death of Fairbanks teenager John Hartman are confident their innocence is being proven by evidence and testimony provided this month in a series of hearings.

“The evidence we are presenting is really cumulative, and each builds on the last,” said Bill Oberly of the Alaska Innocence Project, which is assisting the defense for George Frese, Kevin Pease, Marvin Roberts and Eugene Vent. “We have the confession of William Holmes as the starting point and have built on that. We supported his confession with corroborating evidence and then presented evidence that the initial convictions were baseless … The petitioners remain upbeat about how the case is going.”

Four weeks of evidentiary hearings began October 5 in Fairbanks. At the conclusion of the hearings, Superior Court Judge Paul Lyle could rule that the four men deserve a new trial, or, as supporters hope, he could rule they are innocent and order them immediately released.

The Alaska Innocence Project, the Tanana Chiefs Conference and others contend the men – known as the Fairbanks Four – were victims of a racially-tinged rush to judgment by police and prosecutors eager for a conviction for Hartman’s death.

Supporters say the four men – three Alaska Native, one Native American – were convicted based on two confessions, later recanted, obtained by police using a controversial interrogation method; and on testimony from a witness who identified the four men as being involved in another robbery that evening, although the witness had been drinking and he saw the robbery from 550 feet away in the dark. He later recanted his testimony, then said he stood by it, then recanted it again.

The men, teenagers at the time of the deadly assault, had alibis backed by witnesses. No DNA evidence or other physical evidence linked them to the crime. Two of the men rejected plea bargains in return for testimony against the others. Frese’s requests to take a lie detector test were rejected by the state, the Fairbanks Daily News-Miner reported. 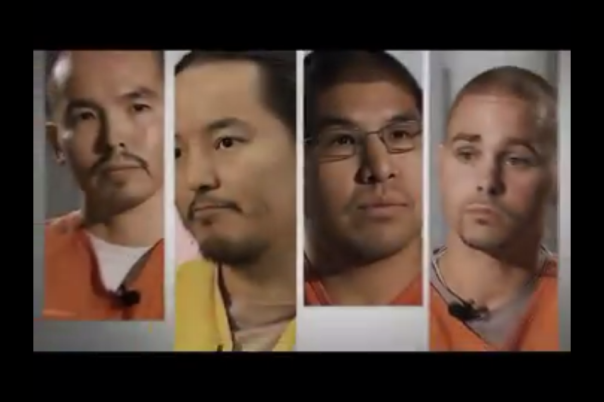 Efforts to prove the men’s innocence were bolstered in 2011 by a detailed confession from William Z. Holmes, a Fairbanks man serving a double life sentence in a California prison for two drug-related murders; he later passed a polygraph examination regarding his account. The confession corroborated a statement about Hartman’s death that Holmes associate Jason Wallace made to his own public defender as he prepared for trial in 2003 for another murder.

Holmes claims he was driving four friends around, looking for “drunk Natives” to harass, when they came upon a white teenager walking alone at 9th Avenue and Barnette Street. Holmes said he stayed in the car while the four jumped out and assaulted and robbed the teen.

Holmes wrote that when the four returned to the car, three said Wallace had stomped on the teen’s head until they stopped him. They later read in the newspaper that the teen died and that four Native teens had been arrested for the crime.

Those statements led to a petition for post-conviction relief, legalese for an opportunity to contest and try to reverse the conviction.

Here are some highlights from the evidentiary hearings.

Week 1: An evidentiary hearing is a civil, not criminal, hearing, and the State of Alaska contends it’s not responsible for the cost of transporting Frese, Pease, and Vent between Fairbanks Jail and the courthouse for the hearing except to testify. (Roberts was paroled to a halfway house in June.)

Blogger April Monroe, an advocate for the Fairbanks Four’s exoneration, launched an online crowdfunding campaign to raise $25,000 to cover the state’s costs; the effort raised $27,891. But according to Monroe, Alaska State Patrol increased the number of troopers, and thus the cost, required to transport and stay with the three men while in court. That cost exceeded the amount raised.

Monroe offered to return the money to donors; donors told her to give the money to the Alaska Innocence Project or use it to assist the three men when they’re released.

On October 5, Holmes testified that he wrote his confession about his and others’ involvement in Hartman’s death “because he was encouraged to come forward by a prison guard” with whom he discussed the deadly assault, and “because of ‘my relationship with God,’” the Alaska Dispatch News reported.

Holmes testified that he drove the getaway car but did not see the fatal beating; in his confession, he wrote that others in the car said Wallace had repeatedly stomped on the teen’s head after they knocked him down and robbed him.

On October 9, Arlo Olson, whose trial testimony about seeing the four men in the dark at a robbery scene was critical to the convictions, testified that his damning testimony was “carefully and deliberately manipulated” by Fairbanks Police Detective Aaron Ring and Prosecutor Jeff O’Bryant, the Fairbanks Daily News-Miner reported.

“After the death of Hartman, Olson reluctantly came forward to give police a statement about what he saw that night. He said Ring told him police already had the killers in custody,” the Fairbanks Daily News-Miner reported.

Olson “described an unrecorded interview process where Ring filled in [each] ‘I don’t know,’ ‘I guess’ and ‘I don’t remember’ with plausible suggestions, which included them showing him a vehicle he didn’t recognize as the one that was used in the robbery of [Frank] Dayton on First Avenue.”

“I remember being scared,” he said, the Daily News-Miner reported. “They knew more about where I was than I did myself.” Once it appeared Ring “was satisfied with the series of events,” he produced a tape recorder, Olson testified.

“Have you ever been confronted by members of the Native Brotherhood about being a rat?” Bachman asked Olson.

“I don’t know,” he said, the News-Miner reported.

“And if you knew, you wouldn’t tell me would you?”

Week 2: Two Alaska state troopers hired in September 2013 to reinvestigate the Hartman murder testified on October 12 that Bachman hampered their investigation by refusing to release email communications about a 2011 memo from a California prison guard to Fairbanks Police about Holmes’ confession. Police did not act on the memo because they considered the case closed.

One of the troopers testified how he, the other trooper and Bachman had tested Olson’s testimony about seeing the four men at the scene of another robbery 550 feet away in the dark. Bachman said she was able to make an ID from that distance, but the trooper countered, “You did not indicate that to me. All you said was ‘O my God, oh my God,’ and I didn’t know what you meant by that.”

Bachman did not respond to questions from ICTMN.

On October 14, Garreth Edwin testified that he remembered seeing Roberts at a wedding reception at the Eagles Hall from midnight to 2:30 a.m. the night of the assault, the Daily News-Miner reported. The assault on Hartman is believed to have taken place around 1-1:30 a.m.

After he learned of Roberts’ arrest, he went to the Fairbanks Police Department to provide a statement, but Ring, the lead interrogator in the case, “kept leading my words and changing the times. It was like he didn’t want to hear what I had to say,” Edwin said, the Daily News-Miner reported.

On October 15, Frese recounted his whereabouts the evening of the fatal assault. He told of participating in drinking games with friends and of somehow injuring his foot – an injury that prompted a nurse to notify police after Frese went the next day to the same hospital where Hartman was being treated for head injuries caused by being stomped.

Frese said he couldn’t have been involved in the assault because he remembered leaving his apartment at 1:30 a.m. – after the assault is believed to have taken place. He became emotional and tearful when he recounted his interrogation by Ring. “I was scared,” Frese said. “They said that I did all this that I didn’t do. You know we’re innocent … I didn’t do this.”

On October 17, Roberts was a guest speaker at the Alaska Federation of Natives conference in Anchorage. “Imagine the worst day of your life,” he said. “Now imagine living that day every day of your life. That’s what it feels like when you’re innocent in prison. We have been suffering for over 18 years now. Our families are suffering. When will this nightmare end?”

McCrary testified that detectives told Vent his shoe prints were found in blood at the scene where Hartman was attacked. “In reality, no evidence like that was discovered at the scene,” KTUU-TV reported.

Week 4: On October 23, Roberts “matter of factly” and “concisely” recounted his whereabouts the night of the fatal assault, the Daily News-Miner reported. He also recounted the ensuing interrogation by police.

Roberts testified that police told him his car had been spotted at the crime scene. “Roberts said he never imagined the police were lying to him,” the News-Miner reported. “He began trying to imagine a scenario in which his car was stolen, used in the crime, then returned to its parking spot, he said. Then the police began telling him they knew he was involved in the deadly assault.”

Roberts testified that he took what police said “at full value, up until when they started accusing me of doing violent things,” he said in the News-Miner’s report of his testimony. “That’s when I knew they were lying to me. I kept saying ‘I’m innocent, I wasn’t there.’”

On October 23, Judge Lyle granted Wallace immunity to testify in the hearing. Wallace had sought to keep his 2002 statement to his public defender sealed, citing attorney-client privilege, “and he invoked his Fifth Amendment protection against self-incrimination when questioned for this case,” the Daily News-Miner reported. Alaska Attorney General Craig Richards’s request for protection of immunity means Wallace cannot be prosecuted for any crimes he may admit to when he testifies.

Bachman “said she has ‘no idea’ what Wallace will testify about,” the Daily News-Miner reported. “She said he may contradict what others have said was his role in killing John Hartman or that he may ‘come clean’ once he’s been given immunity. Or his testimony could go in some third, unexpected direction, she said.”

Jahna Lindemuth, an attorney representing Frese and Roberts, said she believes “granting immunity encourages people to perjure themselves, or lie under oath,” the Daily News-Miner reported. “She said she feared Wallace was being called for the purpose of casting doubt on the theory that he’s responsible for Hartman’s killing.”

Judge Lyle disagreed. “The grant of transactional immunity is designed to obtain the truth by assuring the witness that he or she will not be prosecuted for the crime at issue in the principal criminal case,” he said in the Daily News-Miner report. “Furthermore, the grant of immunity comes with a threat of criminal action for perjury if the witness lies.”

On October 26, Bachman called as a witness a taxi cab driver who testified she saw what she believed to be four men together – she identified two of them as Pease and Roberts – in a blue two-door car near the location of the assault. But other witnesses place the men at different places that evening. And Roberts, the only one of the four with a car that night, drove a beige four-door.