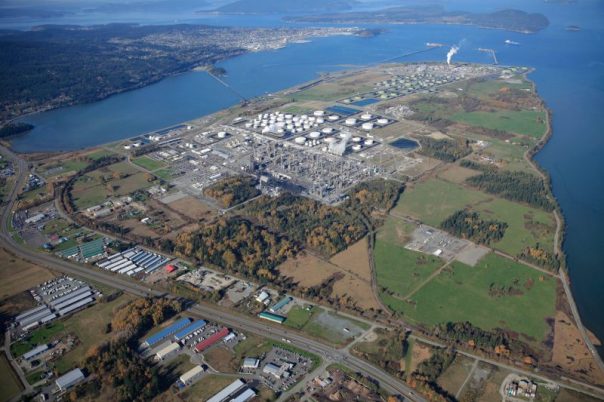 Shell’s Puget Sound Refinery near the Swinomish Reservation has been fined $77,000 by the Washington State Department of Labor & Industries for an uncontrolled release of toxins that sickened residents and sent at least two people to the hospital.

The Labor & Industries investigation found that the Puget Sound Refinery – which produces gasoline, fuel oil, diesel fuel, butane, propane, and petroleum coke used in refining aluminum and sulfur – didn’t adequately decontaminate its main industrial flare when the flare was shut down for routine maintenance on February 20. That resulted in the release of hydrogen sulfide, hydrocarbons, mercaptans and pyrophoric iron into the air that afternoon, Labor & Industries reported.

“A refinery flare is a disposal system that burns off waste gases and vapors that cannot be used during production,” Labor & Industries reported. “It’s also a safety device that can help prevent fires or explosions during power outages or other emergencies. The flare must be decontaminated and shut down periodically for maintenance.”

Shell Puget Sound and the Northwest Clean Air Agency received numerous complaints from nearby residents and businesses the day of the release. “To me, it smelled like really bad sulfur, rotten eggs,” Michelle Cladoosby told KING 5-TV. Her father, Mike Cladoosby, 81, told KING 5, “It burned. I had a hard time breathing.”

The elder Cladoosby’s son is Brian Cladoosby, chairman of the Swinomish Tribe and president of the National Congress of American Indians.

In a statement issued the day of the release, Shell Puget Sound general manager Tom Rizzo said refinery personnel “responded to find and correct the source of the odor, and this maintenance activity was suspended. As an additional precaution, health and safety personnel were dispatched to conduct air monitoring in the surrounding area.”

Three days later, the company stated that the odor “was a result of non-detectable levels of sulfur-based compounds.” The company acknowledged the odor “was strong and unsettling to some of our neighbors,” and added, “We know that our license to operate comes from the community, and we are resolved to make sure an odor issue like this does not happen again.”

But it wasn’t the first time this happened. The company was cited by Labor & Industries in 2013 for skipping critical steps when shutting down the flare. In that case, there was an explosion that nearly injured several contractors and Shell employees. Over the last three years, Labor & Industries responded to several complaints that resulted in 11 inspections at the refinery.

Regarding the latest incident, Shell was cited for one willful violation and fined the maximum of $70,000 for “knowingly and intentionally not following safe work practices for the control of hazards” when shutting down the flare. The company was also cited for one serious violation with a penalty of $7,000 for giving workers the incorrect procedure for shutting down the flare.

A “willful violation” can be issued when Labor & Industries has evidence of plain indifference, a substitution of judgment or an intentional disregard to a hazard or rule. A “serious violation” exists if there is a substantial probability that worker death or serious physical harm could result from a hazardous condition.

In an agreement reached in July 2013 with the U.S. Justice Department and EPA, Shell is spending at least copy15 million to resolve alleged violations of the Clean Air Act at its refinery and chemical plant in Deer Park, Texas.

Shell is required to take the following actions to improve the efficiency of its industrial flares at Deer Park: minimize flaring by recovering and recycling waste gases (which may then be reused by Shell as a fuel or product); comply with limitations on how much waste gas can be burned in a flare (flare caps); and install and operate instruments and monitoring systems to ensure that gases that are sent to flares are burned with 98 percent efficiency.

According to the EPA, the pollution controls required by the settlement will reduce harmful air emissions of sulfur dioxide, volatile organic compounds (VOCs), including benzene, and other hazardous air pollutants by an estimated 4,550 tons or more per year. These controls will also reduce emissions of greenhouse gases by approximately 260,000 tons per year.

In addition to reducing pollution from flares at Deer Park, Shell is modifying its wastewater treatment plant; replacing and repairing tanks as necessary; inspecting tanks biweekly with an infrared camera to better identify potential leaks; and implementing enhanced monitoring and repair practices at its benzene production unit.

Shell’s Deer Park refinery is the 11th largest refinery in the United States, processing approximately 330,000 barrels per day of crude oil and approximately 8,000 tons per day of acetone, benzene, ethylene, phenol, toluene, and xylene. The chemical plant and the refinery operate 24 hours a day, 365 days a year.

Shell’s Puget Sound Refinery processes as much as 145,000 barrels (5.7 million gallons) of crude oil per day – “enough to fill a 17-foot-deep swimming pool the size of a football field,” according to the company.

A new threat on the horizon

A delicate marine environment, a messy history and a new threat on the horizon have the Swinomish Tribe on guard.

March Point was included within the boundaries of the Swinomish Reservation in the 1855 Point Elliott Treaty, but it was removed from the reservation and made available for settlement during the presidency of Ulysses S. Grant. About 35 years later, in 1911, Shell built a terminal here, marking its first entry into the U.S. oil and gas industry, according to the company. Today, Shell Puget Sound is one of two refineries on March Point; the other is owned by Tesoro.

Fidalgo Bay Aquatic Reserve is one of seven state-designated reserves dedicated to protecting unique habitats and native species. “The reserve contains tidal flats, salt marshes, sand and gravel beaches, and expansive native eelgrass beds. These habitats are recognized as essential to the reproductive, foraging, and rearing success of many fish and bird species,” according to the Washington State Department of Natural Resources.

Padilla Bay is an estuary at the saltwater edge of the large delta of the Skagit River, and is a National Estuarine Research Reserve. The bay contains nearly 8,000 acres of eelgrass – habitat for salmon, crab, perch, and herring shared by great blue herons, eagles, otters, seals, and humans. A heron colony on March Point is believed to be the largest in all of Western North America.

Environmental advocates, including the Swinomish Tribe, say 100 years of industrial uses on March Point threaten the ecological balance and an environment that has sustained the First Peoples of the region for millennia.

Chemicals from a 14-acre landfill that operated at March Point from 1950 to 1973 have been detected in sediment and water samples collected from the site since 1985. Samples from the site have contained metals, phthalates, phenols, polycyclic aromatic hydrocarbons, and dioxins/furans. Tests of surface and seep samples adjacent to the landfill detected metals, petroleum compounds, and polychlorinated biphenyls (PCBs) contamination. “These contaminants are generally above the cleanup levels set by [the Washington State Department of] Ecology to protect human health and the environment,” reported North Sound Baykeeper, which is funded by the Department of Ecology to educate residents about the site cleanup.

Shell is one of five entities named by the state as a “potentially liable party” based on its “extensive use of the site land,” and has agreed to participate in studies to determine the nature and extent of contamination and to develop a cleanup plan.

One step forward, three steps back, according to environmental advocates. Much of the crude oil that Shell’s Puget Sound Refinery processes comes by tanker from oilfields on Alaska’s North Slope and by pipeline from Central and Western Canada. Now, Shell wants to bring Bakken shale crude from North Dakota and Montana into the refinery by rail – on tracks that cross Swinomish land. Shell Puget Sound is following Tesoro’s lead; Tesoro’s March Point refinery is, according to that company, the first refinery on the West Coast to receive Bakken shale oil by train.

“This crude would replace some of the oil currently brought in by ship so we can maintain current production, not increase capacity,” Shell Puget Sound reported on its website. “The project would handle about one train per day in and out of our facility.”

Shell proposes building a rail spur on its property, with equipment to pump oil from rail cars into the refinery. “This project will impact some existing pasture and a slough on the property designated as wetlands. Design features that minimize impacts on surrounding wetlands include track routing, re-routing an existing pipeline, and careful placement of retention ponds.” To protect the bay from oil intrusion, Shell proposes containment ponds “large enough to contain all the oil in a full 102-car unit train.”

An environmental impact statement is being developed on the proposal. Meanwhile, the Swinomish Tribe has asked a federal court to stop Burlington Northern Santa Fe Railway’s shipment of Bakken crude oil to Shell Puget Sound’s neighbor, Tesoro, at March Point, saying the rail traffic violates a 1991 easement granted to BNSF by Swinomish. The easement allows one train of 25 rail cars to cross the reservation in each direction daily, and requires BNSF to regularly update Swinomish on its cargo. According to Swinomish, the tribe learned from media reports in late 2012 that trains of 100 cars or more were beginning to cross the reservation.

Should the court uphold the agreement, it could put the brakes on Shell’s proposal.