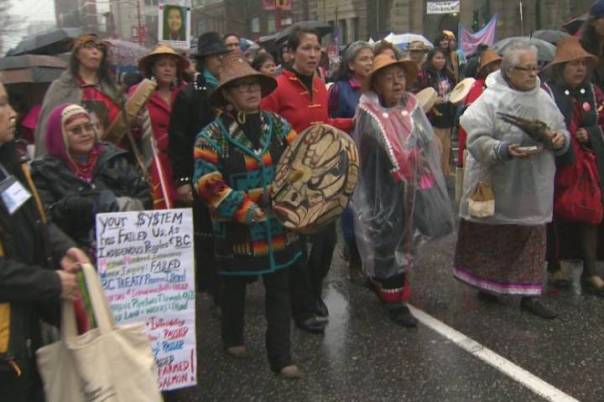 The federal ministers charged with launching a national inquiry into missing and murdered indigenous women say that the families of victims are deeply concerned about inadequate policing in their communities.

“We heard about the lack of satisfaction with the justice system,” Carolyn Bennett, the minister of indigenous affairs and northern development, told reporters Monday. “The incidents that [families] felt were a murder were labelled a suicide and therefore there would not be any investigation.

“And in small communities, to think that a murderer is out in their community made them feel very unsafe, and clearly, yet again, [the families are] saying that there is no justice.”

Bennett has been travelling the country for the past three months for “pre-inquiry” talks to meet and listen to survivors and the families of loved ones who have been murdered or who have gone missing.

She said she has met with some 2,000 people at 18 meetings held from coast to coast to coast. Thousands more have participated in an online consultation process. The minister said the formal inquiry will be struck sometime before summer and will include input from the provinces and territories.

A commissioner has not yet been chosen.

Patty Hajdu, the minister for the status of women, said that dissatisfaction with police investigations was a common refrain from people she met while travelling with Bennett.

Bennett said that many families want the police to dust off cold case files and take a second look at the evidence collected.

She said there have been some particularly egregious cases, including one in Halifax where a woman was shot in the back of the head but the police deemed it a suicide.

She also pointed to a case in Toronto where a woman, Bella Laboucan-McLean, fell some 31 floors from a condo balcony to her death.

Police did not begin investigating her case until 12 hours later, and the death has not yet been ruled a homicide despite the suspicious circumstances. There were five other people in the condo at the time of her fall, but the other guests said they did not know how she died.

“The depth and breadth of this tragedy is way bigger than we had thought,” Bennett said. “I think people do want to know what happened [to their loved ones],” she said, adding it will be up to the commissioners of the national inquiry to decide just how many cold cases should be reopened.

The president of the Native Women’s Association of Canada said concerns about policing should be at the heart of the national inquiry.

“If there has been misconduct, then it needs to be addressed,” Dawn Lavell-Harvard said in an interview with CBC News.

“That is going to be absolutely central to reopening some of these cold cases, that have been sitting for many, many years. If we find there wasn’t an adequate investigation in the first place, then those need to be looked at; our women deserve that much,” she said.

In Winnipeg, the anger is palpable, Bennett told reporters last week. She said there is “tremendous anger and cynicism” directed at police in that community.

Bennett also said Monday that access to police services is a problem, especially for indigenous people living in Canada’s North.

“Their unique situation has meant that even in places like Labrador, where, if they’re calling to report a violent episode they get an answering machine that’s answered in St. John’s. And they don’t have [access to] services that speak Inuktitut.”

Bennett said the government will get to work right away to address some of these more pressing issues.

“We are very keen … as we come to the budget and come to the kind of things we can do right now, we’re not going to wait [until] the end of a two-year commission to get going on the things that we’ve heard are urgent right now around housing, shelter space and racism and sexism in policing,” she said.

RCMP Commissioner Bob Paulson conceded last December that there are racist police officers in his ranks.

“I understand that there are racists in my police force. I don’t want them to be in my police force,” Paulson said, encouraging indigenous people to report acts of racism to help root out the scourge of discrimination.

“I would encourage you all, though, to have confidence in the processes that exist, up to and including calling me if you are having a problem with a racist in your jurisdiction or any other problem,” he said.

Indigenous women make up 4.3 per cent of the Canadian population, but the report found they account for 16 per cent of female homicides and 11.3 per cent of missing women.

Bennett said there are many more cases than those the RCMP uncovered in that report.

Lavell-Harvard said the RCMP number is incomplete, because of mistrust between the police and indigenous communities.

“Part of the challenge comes from the fact that very often many families, because of negative interactions in the past, because of racism, have not in fact reported when a loved one goes missing,” she said.

But Rona Ambrose, the interim leader of the Conservative Party, has since reversed that position, saying the Tories will support an inquiry.

Prime Minister Justin Trudeau promised during last fall’s election campaign to immediately launch an inquiry as part of his bid to establish a new “nation-to-nation” relationship with First Nations.