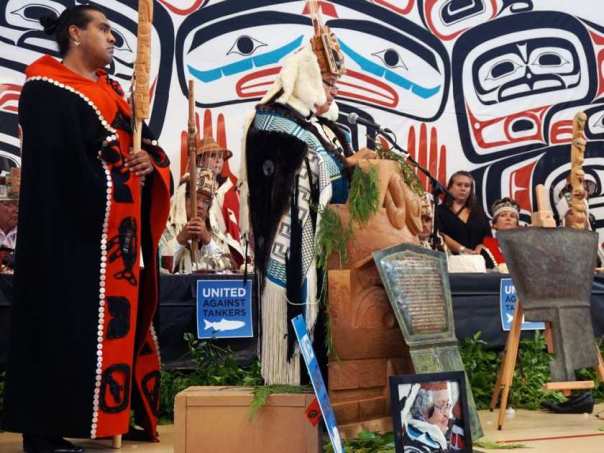 Darin Swanson, head chief of the Yahgulaanaas/Janaas clan at the ceremony where two hereditary chiefs were stripped of their titles. Ernest Swanson, his nephew is to the left holding a staff. Mary Helmer / For PNG

The extraordinary decision by a Haida clan to strip two of its hereditary chiefs of their titles for secretly supporting the proposed Enbridge Northern Gateway pipeline is being closely watched by First Nations across Canada.

The rebuke, delivered last week in an elaborate ceremony witnessed by more than 500 people, came as the Haida Nation rejected what they say is a growing trend by companies to enlist the support of hereditary chiefs as a way of claiming broad First Nations support.

“This is an absolutely huge decision and I think it is a wake-up call to the hereditary system of governance and leadership,” said Grand Chief Stewart Phillip of the Union of B.C. Indian Chiefs.

“I think First Nations across the province and throughout Indian country in general are paying attention to these developments.”

On Aug. 13, members of the clan stripped Carmen Goertzen and Francis Ingram of their titles, effectively removing them as representatives of two houses, the Yahgulaanaas Janaas of Daadens, and the Litjaaw Yaahl Naas. Goertzen, a well-known Haida artist, had held the position for 25 years. Ingram had only been appointed a year ago.

The Haida are made up of 22 house clans, each overseen by hereditary chiefs. An elected council represents the Haida Nation.

The men were part of a group of eight, including two other hereditary chiefs, who signed a letter to the National Energy Board in March supporting Northern Gateway’s request for a time extension to its permit for the bitumen transport pipeline. Earlier this summer, the Federal Court overturned federal approval of Northern Gateway, leaving the company with only one more “faint hope” opportunity.

Goertzen, Ingram and the others, including four men whom the Haida Nation says do not hold any hereditary position, formed a group they called Hereditary Chiefs of North Haida Gwaii LLP.

The head of the clan that Goertzen and Ingram represented said the community never knew the men had signed on to support Enbridge and that their letter made it look like the Haida at large had reversed their long-standing opposition to the project.

“I don’t think anyone in a clan can tell people who they can work for, but when you are a hereditary chief leader you have responsibilities to your clan and you have to consult with them on important issues like this,” said Darin Swanson, the head chief of the Yahgulaanaas Janaas clan. “As hereditary leaders, they didn’t do that. Everything was a big secret up till now. At the end of the day, they are crawling into bed with Enbridge. It is almost up to the point that Enbridge is accepting them as (representing) the consultation on the whole of Haida Gwaii.”

Attempts by Postmedia to contact Goertzen and Ingram were unsuccessful. But in an interview with Vice News, which broke the story, Ingram denied asking for an extension, even though he signed the letter. Goertzen acknowledged that Enbridge had paid the men fees to attend a meeting but that he had his community’s best interests at heart.

“To meet with them, we’ve been paid per diems, and we’ve had a few meetings, not even four days,” he told VICE News. He said his clan members were “blowing stuff out of proportion.”

Peter Lantin, the elected president of the Council of the Haida Nation, said the letter shocked his members because they had a consensus agreement to oppose the pipeline project and they see this as an attempt by Enbridge to divide them.

“The lesson to be learned in this is that there is a proper way to consult with us and at the end of the day, no means no. People are really questioning the integrity of the Haida Nation,” he said.

“The problem that we’re seeing with the tactics of Enbridge is that they know how we feel, they know what our answer is and they don’t like it.”

A spokesman for Northern Gateway said it was aware of the action against the two hereditary chiefs but maintained they had not represented the Haida Nation to them. It presented meetings with the eight as being for the purposes of discussing “West Coast marine emergency response, employment and training opportunities, food source protection, and other safety measures.”

“At no time have these individuals claimed to us either verbally or in writing that they represent or speak for the Haida Nation or their respective clans,” said communications manager Ivan Giesbrecht.

Phillip, whose organization represents 115 First Nations in B.C., said the implications stretch well beyond the Northern Gateway project and touch on other projects such as Kinder Morgan’s Trans Mountain pipeline project and the provincial government’s push to export liquefied natural gas.

“It is a clear message that hereditary leaders need to know and understand their stewardship responsibilities to caretake the land in a proper and responsible fashion,” he said.

This isn’t the first time First Nations have protested the support given to Enbridge by hereditary chiefs. The company says it has support of 31 aboriginal communities across B.C. and Alberta, including a number of First Nations, as well as Métis associations.

One of the “aboriginal stewards” of the Enbridge proposal is Elmer Derrick, a hereditary chief of the Gitxsan nation. A few years ago, members of the Gixsan seized Derrick’s office in Hazelton after he became the first hereditary chief to support Northern Gateway. Many of the nation’s other hereditary chiefs wrote letters saying Derrick doesn’t represent them, although others do support the project. The Gitxsan remain divided.