‘Using the courts to take down my teepee is not our way of life’: Siksika man fights for right to protest 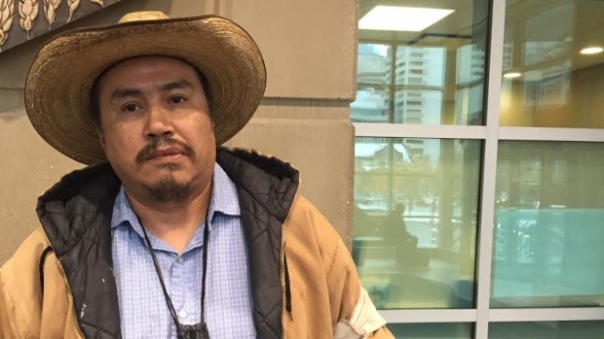 After living in a teepee on the Siksika Nation for nearly a year, Ben Crow Chief appeared in a Calgary courtroom on Friday afternoon, arguing he should be allowed to continue his blockade protest.

Siksika’s Chief and Council filed an injunction in an effort to get Crow Chief off the land where the Cluny subdivision is supposed to be built following the 2013 flood. But Crow Chief and his supporters say members of the Nation were not consulted ahead of the rebuilding plans.

“These subdivisions that they keep putting us in, we don’t want to live in these subdivisions,” he said. “OK yeah, a house is being built, but this is not our communities.”

“In our way of life, we grew up in a clan system where families lived with families and now we’re scattered throughout the reserve and we have no say in our house.”

‘Where are their hearts?’

The Alberta government made a commitment of just over $45 million towards rebuilding efforts on the reserve following the floods, but construction must be completed before April 1, 2018 in order for the Nation to access the money.

Only about $1.5 million has been forked over by the province, according to lawyer for the chief and council, Sean Fairhurst.

Crow Chief doesn’t trust how Whissel Contracting Ltd. is using the funds, citing the company’s catering costs as one of his concerns.

Dozens of Crow Chief’s supporters filled the gallery of the courtroom. They believe the chief and council do not have their best interests at heart.

“Where are their hearts?” questioned Crow Chief. “Where is their loyalty? It is not with the Nation.”

Siksika’s Chief Vincent Yellow Old Woman was in Ottawa on Friday and was unable to be at the hearing.

“All that we are focused on is the form of protest,” said Sean Fairhurst, lawyer for the First Nation. “While hearts might be in the right place, there is significant damage being done.”

The blockade is complicating an already “long and complicated” rebuilding process, said Fairhurst.

“Sadly we are here because we find elements of a community divided.”

Construction of the Cluny subdivision was about 80 per cent complete when Crow Chief began his protest last year.

Because construction was halted, the First Nation is now exposed to a claim by Whissel Contracting so it is suing Crow Chief for $500,000.

Justice Sandra Hunt McDonald indicated she would have a written decision in the coming weeks.