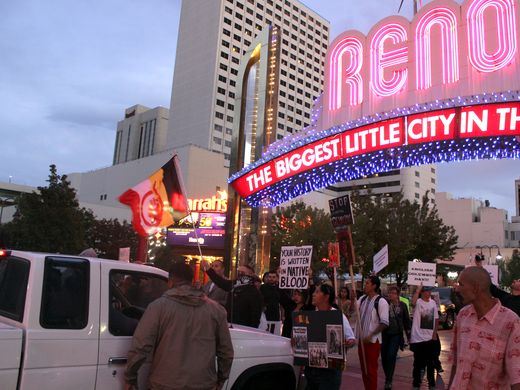 RENO, Nev.— Officials with REMSA said five people were treated for minor injuries after being hit by a pickup driver during a confrontation in downtown Reno. It happened during a Columbus Day protest put on by the American Indian Movement of Northern Nevada (AIMNN).

Police say a group of protesters was standing in the crosswalk blocking traffic at the Reno arch when a driver started edging toward them. This turned into a heated confrontation and the driver eventually drove through the group of protesters.

According to REMSA, one person was transported to a hospital with minor trauma injuries. The four other patients refused transportation to a hospital.

Reno Police say the driver of the pickup stopped several blocks away and called police to provide his account of the events. He and his passenger were interviewed and are cooperating with the ongoing investigation.

According to Lorayn Walser, Secretary of AIMNN, the organization was having a peaceful protest downtown. They want Columbus Day to be changed to Indigenous People’s Day in Nevada.