Police armed with a less-lethal launcher during raid on camp, Oct 27, 2016.

On the morning of October 27th 2016, Frontline Camp – Sacred Ground Camp was raided by the militarized police forces. During a 12 hour stand off with over 300 police the camp was bulldozed and over 100 people arrested, including elders, and people in sweat ceremony.

This camp was established in the path of the Dakota Access Pipeline to protect the Ancestral remains and Sacred Water, it was a small camp of a few people but after the mass arrests on the October 22, 2016 prayer walk, many people from the Oceti Sakowin encampment occupied the land. This land is Treaty Land from the 1851 Fort Laramie Treaty, we have every right to occupy this land, and to defend it from further destruction and desecration.

A view of the police armoured vehicles during the raid.

Energy Transfer Partners and its investors and shareholders feel different, so does the Morton County Sheriffs Department. In an act of unprecedented violence and domestic terrorism against Native peoples and their allies the riot police assaulted and brutalized the People. Corporate Greed and modern western society’s obsession with consuming energy has fueled the fires and the racial hatred against Indigenous Peoples world wide. The very fact that the Police are protecting corporate interests speaks for itself, we live in a fascist police state. We live in a time where land, water, and peoples very lives are considered acceptable collateral damage to the CEO’s of these corporations, and the silence from the Government proves they agree. The fact that the Obama Administration has not stepped in and stopped these atrocities is reprehensible, but what can we really expept from a Government that has never once treated the Indigenous People with any form of respect or common decency.

Words cannot begin to describe the feelings I had that day. I was working on a project and I heard the call out in the Casino lobby, “the Police are coming they are raiding camp.” After many false alarms, since the influx of new protectors at Sacred Ground camp, I headed out to see for myself if this was true. I arrived at the camp at 11:00 am there was many people there and cars, we could see the Riot Police and their machines gearing up to mobilize against the People. The energy was palpable, I could feel what was coming, people were shouting to remain calm, to be brave and to stand firm, others were saying stay behind the white line on the right side of the road and that if we stood there the Riot Police would not harm us. Horses and people were milling around trying to organize themselves and all the while we could see them coming.

A National Guard Humvee with soldiers equipped with sniper rifles during raid.

What followed was 12 + hours of chaos, it is absolutely stunning, and sadly not surprising to see such an excessive use of force by the Police against the People. In a story that has been continuing for over 500 years we were attacked and brutalized at the hands of the colonizers, we were repeatedly told by the police on a loud speaker: “We do not want to harm you, We do not want to arrest you.” Yet they harmed us, they arrested us, and eventually they bulldozed the Sacred Ground before our very eyes.

A blockade was built and set on fire to stop them from coming in and we all watched as people who were scared put it out and then we watched as all hell broke loose. I watched as they arrested my friend Dan on his birthday in his regalia for standing in Prayer, I watched as they tasered a man for holding his ground. I was shot in the chest and the knee, and still they came. We tried as hard as we could to hold our frontline and to stop them and keep people calm but we were relentlessy forced back. People sang and cried, we helped each other when we were injured, we encouraged each other when we were weakened by battle fatigue. What struck me the most was the amount of force put into protecting OIL over water, and how souless the riot police looked, how they smirked and laughed at people who they were terrorizing, the mindset of these pigs is so foreign to humanity. 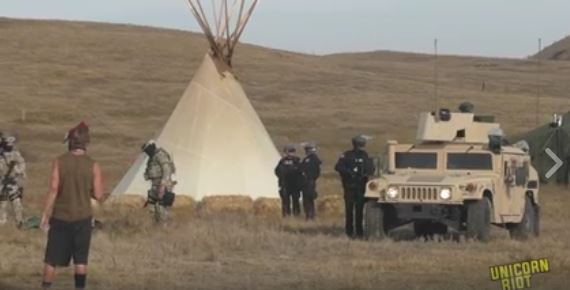 We were tear gassed, maced, concussion grenades, rubber bullets, sound cannon, bean bags, pellet grenades, tazers, snipers in the hills, and of course beaten with batons. I was hit in the chest with a bean bag, and shortly after I took a rubber bullet in the knee, I dearrested myself and helped others from being arrested. I recorded video from the hood of a truck my comrades were locked down to as the police attacked and beat several Warriors, I bore witness to the setting up of a Tipi on the road and watched with my heart in my throat as they tore it down. Yet we held them off as long as we could, we tried our very best to stop them, eventually we were forced to the bridge that is north of Standing Rock Encampment on highway 1806. A fiery blockade was erected and maintained until the morning of October 28th when it was dismantled through pacifism and neo colonialism. Meanwhile as all this was happening on Highway 134 a lone DAPL security guard attacked people holding a blockade in his vehicle, he had an AR15 and he shot to kill, the warriors fought back and managed to take his truck, he ran into the water with his gun and was eventually arrested by the Bureau Of Indian Affairs; his truck was set afire.

At the end of the day, the pipeline is still being built, the people are still standing firm, and all we can do is continue to PRAY and fight back. They are just a few short miles away from the river, and we must remain vigilant and also act proactively to stop the Black Snake and kill it dead. We cannot afford to allow this pipeline to continue, people need to realize that for an effective resistance to succeed we must not allow fear mongering and fear rule us. 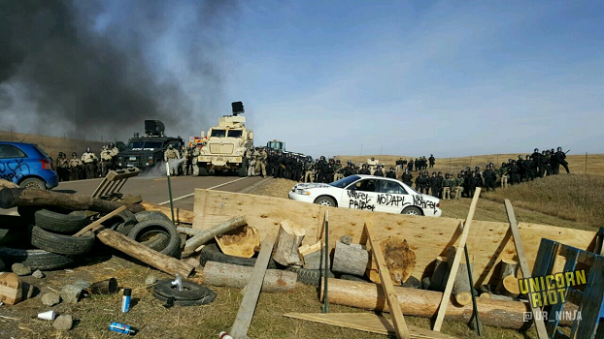 On October 28th the hard work of the People and the Warriors to hold a frontline has been dismantled. The holding of the blockade at the bridge on highway 1806 has been taken down, this was negotiated by a group of people from the main camp (no disrespect meant but it’s true) with no idea how detrimental to a resistance movement taking the blockade down is. The blockade was a MESSAGE to the WORLD about how we as Indigenous People of this continent are being treated, this fight is about the pipeline and Sacred Water but what it really boils down to is Indigenous Rights and Title and Eminent Domain, Treaty Rights and the violation of our Human Rights! Environmental Racism and Land Theft and the bullshit that white society brought since contact has infected the minds and hearts of our Warriors and Elders, this has to stop.

The old story of divide and conquer has a chance of winning because when it comes down to it scared people are attempting to squash the warrior spirit through pacifism, we understand this fear but we cannot let it rule us. The sincere hope is that these people stop trying to police our own and stand up beside us! Diversity of tactics must be used and also be respected, we have exhausted all the at least we tried things and all that is left to us is to fight. The call out for Warriors was answered, we are here to stop a pipeline, we know the risks and we accept them for what they are, instead of using prayer against your own people, use the prayer to empower the people.

In The Spirit of Crazy Horse