← The Tactical Activists
Video: Mapuche mobilization for the freedom of elder Francisca Linconao → 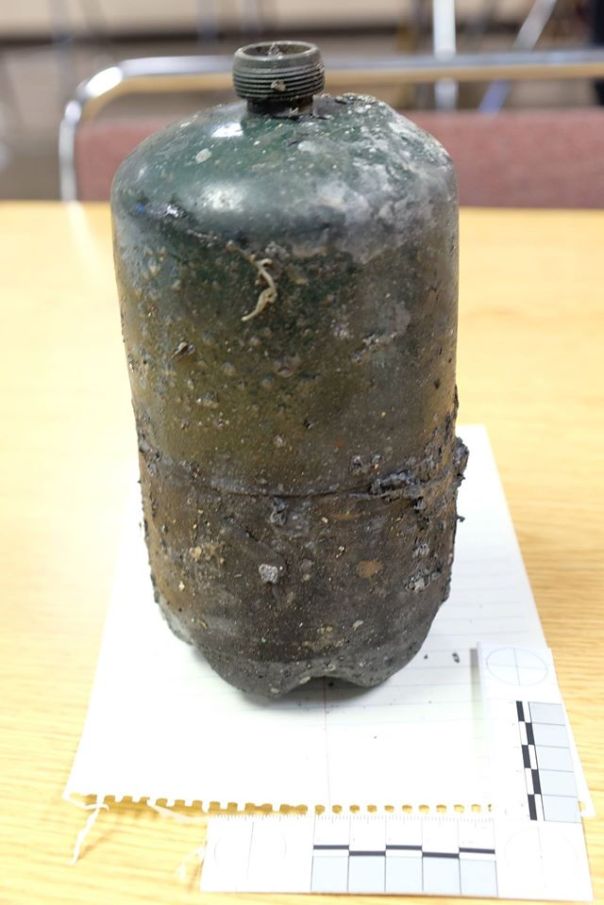 In yet another lie perpetrated by the Moron (sic) County Sheriff’s Department, law enforcement officials are now claiming that the horrific injuries inflicted on a young activist during the “Battle of Backwater Bridge” was the result of a propane tank protesters were using as an improvised explosive device.On November 20, 2016, protesters attempted to remove a barricade on the Backwater Bridge that has been kept in place by police since October 27.  Police used water cannons, pepper spray, tear gas, concussion grenades, and rubber bullets as part of their crowd control operation.

Early in the morning hours of November 21, as the confrontation continued, police threw concussion grenades into the crowd of people on the bridge.  Sophia Wilansky sustained severe injuries to an arm and was taken to hospital where she underwent surgery to save her arm.

Bu the Moron County Sheriff’s Department is trying to spin the injury as resulting from some type of improvised explosive device used by protesters:

“We are aware of the information about the woman on social media who has claimed she sustained injuries to her arm due to law enforcement tactics. The injuries sustained are inconsistent with any resources utilized by law enforcement and are not a direct result of any tools or weapons used by law enforcement.” – Lt. Tom Iverson, ND Highway Patrol. Below is a picture of a propane tank found on the bridge following an explosion early Monday morning. Officers witnessed protesters rolling the cylinder on the bridge, saw the explosion and then witnessed protesters running on the bridge to carry a woman from the scene.”

If you look at the propane cylinder, the first thing you might notice is that is intact.  An explosion that would cause such severe injuries would most certainly have torn apart the cylinder, but instead it looks like a used and discarded cylinder that has sustained some fire damage.

For Alonzo Willis of Butte, being sprayed by a water cannon in subfreezing temperatures wasn’t the worst part of a Sunday night confrontation at Standing Rock.

It was seeing a woman severely injured.

He said he and Butte friend Isaiah Other Bull were close to protester Sophia Wilansky when she was injured in a confrontation with police.

After the water-spraying, the crowd had thinned out to fewer than a dozen people. Two of them — including Wilansky — were near a barricade on the highway. “They weren’t past the barricade — not past the barbed wire or anything,” Willis said. “They were just standing there.”

“One of the guys got hit with a rubber bullet. The girl (Wilansky) got hit by a rubber bullet and she fell,” said Willis, 23. “And then they shot a percussion grenade and it got her in the arm.”

Law-enforcement at the scene denied using grenades, and said the Wilansky may have been hurt by a propane tank being used as a weapon by the protesters. But Wilansky, Willis, Other Bull and other eyewitnesses dispute that account.

“It hit her and it just went ‘Boom!’ It blew her down,” Willis said.

He said he and two others “ran over there as fast as we could … she was screaming, ‘My arm is gone!’

He said the police were firing tear gas canisters while she was down. “When we’d gone through action training, they were saying when someone gets hurt, it’s usually best to just leave them, but we knew it was her arm and we had to get her out of there,” he said. “We just picked her up. We ran until we found a car” and put her in it.

“That’s when I first really saw her arm. You could see bone and blood.”

Other Bull was also nearby, and his account matches Willis’.

“They shot her with a rubber bullet and she fell. She was trying to get up and run back and that’s when they threw that grenade at her. Big old wound. All open. As big as a hand.”

Willis said he saw men get out of a giant armored vehicle labeled Stutsman County (N.D.). “They were laughing. One of them said something like ‘That was a beautiful shot.’

“We couldn’t believe it was the police saying it. They didn’t act like professionals at all. They acted like were in a different country and they were in a war.

“They kept saying, ‘Put that phone down.’ They don’t want people documenting.”

Afterward, both Willis and Other Bull said the event had changed them.

Other Bull, 23, lives in both Butte and on the Cheyenne reservation in Lame Deer. His mother, Michaelynn Hawk of Butte, belongs to the Crow nation and is executive director of the Indian People’s Action.

The grandson of a chief, Other Bull refers to himself as “a traditional” and says “you can feel” the spiritual energy at the camp, where “it’s all about trust.”

But he says “Seeing what the cops can do  … it’s hard to trust them now. They do what they want and get away with it.”

“The camping was great,” Willis, an Arapaho, said. “We were all like one big family, a community. … we were all there to save Mother Earth. Everyone was there just to help each other.

But he said seeing Wilansky hurt “made me really not understand how humans can do that to each other.

“We just sat around quiet. We couldn’t laugh after that.”

← The Tactical Activists
Video: Mapuche mobilization for the freedom of elder Francisca Linconao →