On or around December 3rd, 2016 a water protector at Oceti Sakowin received a summons to appear before a federal grand jury that has been convened in relation to the resistance of water protectors. What we know about grand juries is that they have a long history of being used to target those in resistance to the state and engaged in political or revolutionary movements.

The purpose of this grand jury and all grand juries that target revolutionary people and communities is to cause division, manufacture prisoners of war, create paranoia and suspicion amongst comrades. We will not be intimidated and resistance to this is only strengthening our resolve to kill this black snake and all the others.

Water protectors stand in resistance to this grand jury and all tools of state repression, be it on the ground through Morton County’s violent tactics or in the shrouded secrecy of a grand jury courtroom.

Indigenous people, water protectors, legal workers, revolutionaries and comrades from across the camps are actively organizing resistance to this grand jury. Camp wide education efforts are already underway as well as reaching out through our networks of solidarity that know no borders in order to spread the word. 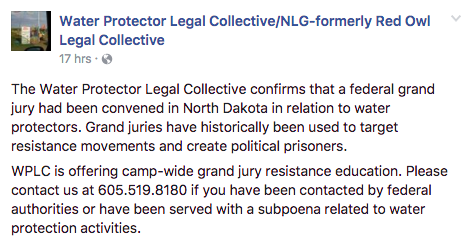 If you have been contacted by federal law enforcement or have been served with a subpoena related to water protector activities or the resistance at Standing Rock please contact the Water Protector Legal Collective at (605) 519-8180. Grand juries rely on the isolation and fear that can come with a subpoena. The first step of resistance is seeking solidarity and support!

Dealing with Grand Juries by CLDC

What You Should Know About Grand Juries

Grand Juries Are An Abuse of Power from CLDC

Don’t Talk the Police or FBI Poster from Crimethinc

Grand Juries and Past Liberation Struggles from Freedom Archives