A fight has erupted between police and thousands protesting ‘Invasion Day’ after a man allegedly tried to set fire to a flag.

Protesters draped in Aboriginal flags marched through Ultimo in Sydney on Australia Day, labelling the arrival of the First Fleet in 1788 as a ‘day of killing’.

Shocking footage shows an officer grabbing a protester around the waist and pushing him to the ground as another leaps at his face with smoke surrounding them.

Other protesters were brandishing poles and some were seen trying to swat away smoke with items of clothing.

One protester was arrested after allegedly setting fire to a flag, with police using a fire extinguisher to put out a small blaze.

Police said they were questioning a 20-year-old in relation to an ‘isolated incident in an otherwise peaceful demonstration’. 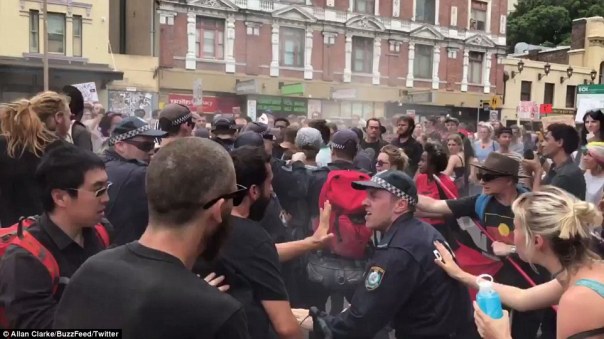 One officer was injured in the alleged scuffle and has been taken to hospital, according to ABC News.

New South Wales Premier Gladys Berejiklian denounced the violence and said she was ‘disappointed’ with the day’s proceedings.

‘We have a democracy and everyone has a right to protest, but today is celebrating everything that brings us together, and I think most people would feel extremely disappointed at what they have seen today,’ she said, according to the publication. 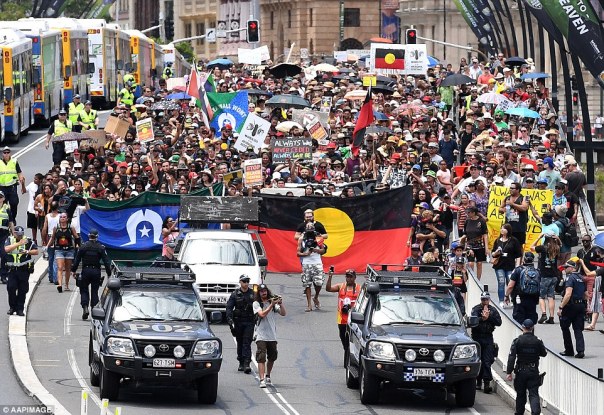 ‘It’s not acceptable to do that on a day like today, however please feel free to express your views.’

Before the protest turned violent, the crowd, many draped in Aboriginal flags, gathered in Redfern where they heard speeches denouncing the celebration of Australia Day, which many indigenous people call ‘Invasion Day’.

Several thousand people, chanting slogans such as ‘Always was, always will be, Aboriginal land’ marched through the inner city.

‘It is a national disgrace to have a holiday on Australia Day – a day which marked the beginning of genocide’, organiser Dave Bell told the crowd.

‘There’s a lot of sadness attached to that day. Let’s all sit down together and come up with a day which will help us move forward.’

Greens Senator Lee Rhiannon tweeted that 10,000 people took part in the march – but police only confirmed ‘thousands’ had attended.

One shirtless man joined the protesters with ‘f*** Aussie pride’ scrawled on his bare back.

As well as the protest in Sydney, 3,000 people gathered at Parliament House in Melbourne before the crowd swelled, gathering numbers as it moved to the official Australia Day parade route that had finished half an hour earlier.

In Canberra, hundreds of protesters marched from the Aboriginal tent embassy to the doors of Parliament House yelling: ‘Always was, always will be, Aboriginal land.’

They then sat outside the front doors of the building for an hour, calling for a treaty as a line of police formed a guard blocking the entrance.