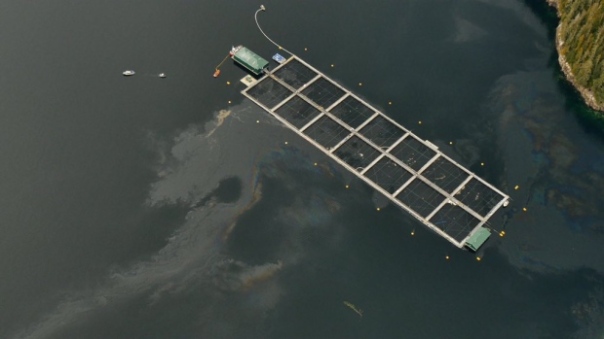 Aerial view of the fish farm and diesel fuel spill.

Emergency crews are responding to a diesel spill at a fish farm near the northern tip of Vancouver Island.

The company that owns the site, Cermaq Canada, issued a statement later on Sunday that the amount of diesel spilled was closer to 600 litres.

Farm crews reported the smell of diesel to Emergency Management B.C. just before 5 a.m. PT, according to an official report.

Fisheries and Oceans Canada (DFO) says the spill was caused by a diesel pump that was left on overnight.

Shortly after 2 p.m., Courtney Bransfield, emergency program co-ordinator for the Mount Waddington Regional District, said all the recoverable diesel had been “contained to the farm’s fish pens” and absorbents to soak up the spill were in place.

“Cermaq highly regrets this incident and is putting together all resources necessary to [minimize] the impact on the surrounding areas,” it said.

“We are reviewing our procedures to prevent this from happening again.”

Bransfield said  that there is still a thin, rainbow sheen visible outside the containment zone, but Coast Guard officials won’t be able to recover that material.

“There’s no real way to soak up that sheen,” she said.

Chief Bob Chamberlin — who lives on nearby Gilford Island — said the sheen was visible “well beyond” the fish farm.

He said his First Nation is concerned about possible damage to nearby clam beds.

“The Burdwood area is a very sensitive area, which has the majority of clam beds that our people rely on,” he said. “Any impact to our traditional food sources is a critical hit to our people.”

Chamberlin said local boats from Kingcome Inlet and Alert Bay are en route to the spill site to assess the damage.

The community has long been opposed to fish farms in the area because they were concerned about how they would affect the environment and now their fears have been realized, he said.

“To have, either through a lack of training or a lack of diligence on the farm, to have an accident such as this on the farm, it’s utterly unacceptable. And there needs to be a very high level of accountability here.”