The Little Shuswap Indian Band in B.C.’s Shuswap region is carving canoes for the first time in over 60 years.

The band partnered with the Okanagan Indian Band to relearn canoe-making skills and every day band members have been working on the shores of Little Shuswap Lake at Quaaout Lodge carving out two large canoes.

Tanner Francois with the Little Shuswap Indian Band said canoe carving is a way of bringing back an important cultural practice after almost 60 years.

“It’s a big thing for us,” he said. “The last time we built a canoe, just from listening to some of the elders, they were either really young or were just newborns.”

Learning canoe skills has been like jumping into a new world, he said.

The logs used for the canoes are cottonwood found near Scotch Creek. (Doug Herbert/CBC)

“I didn’t grow up with any of this,” he said. “Being able to be taught to do something my ancestors were doing — it’s like I’m following in their footsteps.”

‘All I’m providing is a refresher’

Frank Marchand with the Okanagan Indian Band has been helping the band build the canoes. 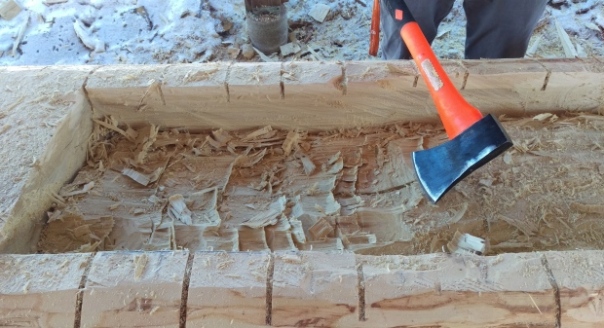 One of the canoes is being carved entirely using hand tools. (Doug Herbert/CBC)

Marchand, who has been carving canoes on and off for the past 25 to 30 years since he was young, said it was an amazing opportunity to pass on his skills.

“In this territory, no one’s forgotten how to make canoes. They remember a grandpa or a great-grandpa making these canoes. All I’m providing is a refresher,” he said.

“I’ve got young Tanner learning from me and he’s going to carry it on to his people and more people beyond that. I’m very proud to be part of this.”

And though the work is tiring, Tanner says he enjoys it.

“I’m probably going to be making canoes from now on,” he said, laughing. “It’s awesome.”

The canoes are expected to be complete and in the water in the first week of June.