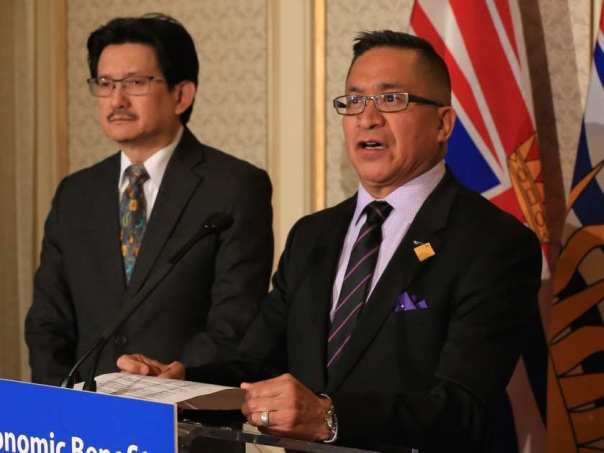 Kitselas First Nation Chief Joe Bevan (right) speaks at the announcement of a benefits agreement with the province backing LNG development in exchange for up to $13 million in funding and a 1,277 land grant. Pacific NorthWest LNG chief operating officer Wan Badrul Hisham is in the background. The event was Thursday, March 30, 2017 at the Fairmont Hotel Vancouver. Derrick Penner / Postmedia News

The Kitselas First Nation on British Columbia’s north coast, on Thursday, signed benefit agreements with the province worth up to $13 million and a 1,227-hectares land grant in exchange for backing liquefied-natural-gas export projects in the region.

Benefits under the agreements will be triggered by progress in development of the Pacific NorthWest LNG proposal at Prince Rupert, which remains mired in lawsuits and controversy over potential environmental impacts, and the LNG Canada proposal at Kitimat.

Both projects have received environmental approval, but remain in the evaluation stage with their major backers as the firms attempt to contain costs on their multi-billion-dollar proposals and grapple with a supply glut of LNG on world markets that add uncertainty to the timeline for development.

“We see these agreements as a positive step towards a relationship with British Columbia and industry in which First Nations of B.C. are a major factor in the provincial economy,” Kitselas Chief Joe Bevan said during the announcement.

Thursday’s signing by the Kitselas, whose traditional territory lies east of Prince Rupert surrounding the Skeena River at Terrace, makes it the third First Nation to sign a benefits agreement over LNG, a critical step for projects to proceed, particularly the $12-billion Pacific NorthWest LNG proposal.

In February, the province signed similar agreements with the Lax Kw’aalams and Metlakatla First Nations, whose territories are more directly impacted by the Pacific Northwest LNG proposal, which is still opposed by hereditary chiefs within the community.

John Rustad, Minister of Aboriginal Relations and Reconciliation, characterized the deals as “a cornerstone in helping us to build LNG potential.”

“We have the support we need to proceed with LNG projects,” with the First Nations agreements government has concluded, Rustad said, though he added that his ministry isn’t finished with negotiating benefits agreements with other First Nations.

Premier Christy Clark campaigned in the last provincial election on the potential for the development of up to five LNG plants in B.C. by 2020. To date, only Woodfibre LNG at Squamish has made a final decision to proceed.

When the major proponents backing Pacific Northwest LNG and LNG Canada will make decisions on whether to proceed remains up in the air.

Pacific NorthWest LNG executive Wan Badrul Hisham said the proposal’s backers are “still in the process of evaluating how we can optimize the economics of our project,” including the possibility of relocating some of its infrastructure to a less sensitive site in Prince Rupert’s harbour.

A decision on the Shell-led LNG Canada development at Kitimat also remains stalled. In December, the consortium, which also involves Korea Gas Corp., PetroChina and Mitsubishi, tendered a bid to replace its lead construction contractor.