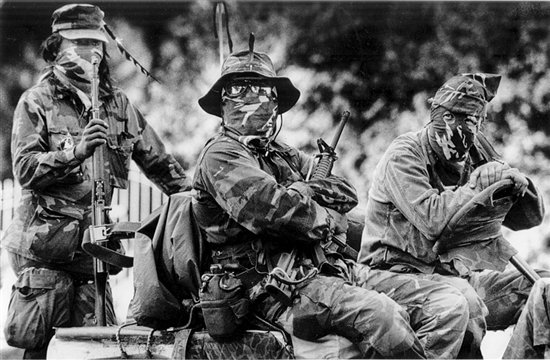 Warriors at Oka, 1990; the warrior in the centre wears web gear (what appears to be an ALICE belt and suspenders with canteen and pouches), described as level 2 gear in the article below.

by Sakej Ward, May 4, 2017
Can you conduct actions without your mission essential equipment? How long can you stay in the field without resupply? Mission duration in the field (away from camp) is the key to independent or long range actions. How operational ready are you without key equipment?
The operational pack is a load out for activist’s actions. It is a specific packing list meant for activist engaging in action ranging from peaceful protests to direct action. It is meant for activists who are actually conducting actions and not just occupying space in camp.
It is meant for activists who will conduct multiple actions while at a camp or action site. It is NOT a survival pack, Get home bag, Bug out bag, or INCH bag. Each one of those kits has particular gear assembled and organized for specific purposes. The Operational pack is a collection of gear for activists type actions in a remote camp environment.
Activists have to learn to pack in accordance with assigned and anticipated actions. If I were going to a camp and just sitting around occupying space then I would need very little gear to pack, perhaps some civilian clothes, personal hygiene kit, “master selfie kit”, entertainment kit and snacks but this/her is for the skill-less activists who does nothing but rob your camp of air, water and food making themselves a burden on the action. If I am packing with the intent of going to a camp (or action site) that will engage in multiple or continuous varied actions (that seize the initiative, escalation of tempo of action, and take advantage of freedom of maneuver) then my packing list will be more extensive as it reflects the needs for multiple actions.
The less action you are willing to do the less gear you need. If a person shows up to an action camp with no gear then they will be doing little to no action. Perhaps, they are best suited for support service related tasks such as camp chores, mechanic, general laborer, technician, cook, server, camp sanitation, camp cleaner, fire keeper, etc as opposed to direct action team members. 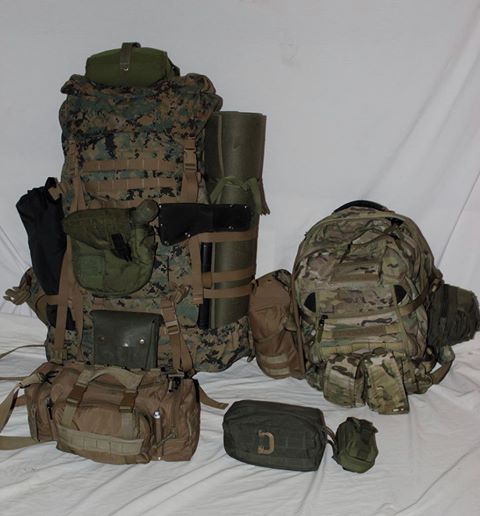 On the left is a USMC ILBE (Improved Load Bearing Equipment) pack with various pouches attached, on the right a smaller assault pack.

When the strategy of the members of a camp is to go with a static occupation then activists may not need gear as they are just occupying space. A camp that launches missions/actions will need people who have the skills and corresponding collection of mission based gear to successfully pull them off.
A dynamic action camp should be the launching site for actions such as reconnaissance, surveillance, probing, shadowing, non-violent raids, non-violent ambushes, non-violent direct actions and direct action, or harassment and interdiction (Whatever of actions fit your doctrine. I am not addressing the question of violence or self defense here. That is up to you). Running missions from a camp puts the activists in the position where they can seize the initiative and force the opposition to react to them, putting the opposition on the defensive but this/her best achieved with aggressively utilizing mobility and maneuver. The Operators pack allows teams to be away from the camp conducting action after action for extended periods of time pushing the tempo of operations up and making opposition surveillance on you far harder to achieve.
Tactics need to turn to fast, hard-hitting, mobile (constantly on the move), self sustaining, and elusive style actions. In these kinds of actions the key to that tactical mobility is the rucksack. It allows the operator to move for extended periods of time with his/her action gear, 1st aid kit, survival kit, food, water, wet-weather gear, warm gear, critical field tools, shelter, sleep system, and mission essential gear.
Gear selection for an operator pack (load out) has to be conducted wisely. The gear has to fulfill the job of allowing the operator to fulfill his/her tasks in the most efficient way possible. The gear has to be selected as having the best chance to support the operator.
As a way of organizing the gear into methods that allow for efficient carry and packing a simple system should be implemented. As an example an operational load out can consist of four levels;
Level one – what you wear. What’s on your person. Its mission is to keep you alive 24 hours.
Level two – Tactical vest –LBV The life support system on the “battle field”. It should keep you operating for 24-48 hours and alive up to a week. It’s a combo of immediate “combat/mission” based gear, Individual First Aid Kit and a survival pack.
Level three – Operators rucksack – replenishes your LBV, provides a semi-permanent existence. It allows the operator to keep moving on the battlefield. It keeps you operating in the field (away from camp) for up to 2 weeks.
Level four – Sustainment bag – Not meant to be carried around. It stays in the camp. It provides secondary and alternate gear as well as replenishes the rucksack after returning to the camp from missions. It keeps you operating another 2 weeks in the field. it is stored away at the camp personal quarters.