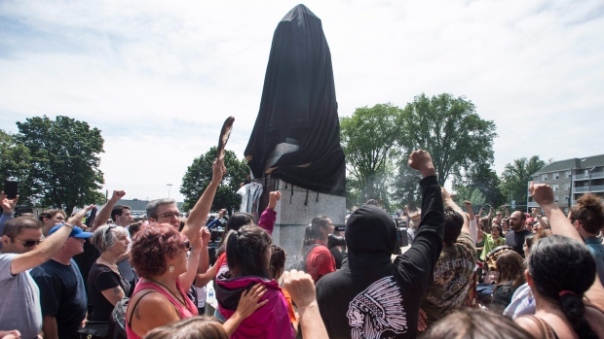 Protesters who pledged to remove a statue of Halifax’s controversial founder Saturday say they came away victorious after the monument to Edward Cornwallis was covered. (Darren Calabrese/Canadian Press)

Mayor Mike Savage says veil is a temporary measure, will be removed after demonstration

Municipal crews draped a black cloth over a statue of Edward Cornwallis in a downtown Halifax park Saturday as protesters gathered with a plan to remove the statue.

After a city truck arrived, crews informed the gathering they would shroud the monument as a sign of good faith.

Cheers went up from the crowd as the monument disappeared under its new veil. Some demonstrators chanted and raised their fists in the air as others drummed and sang. Afterward, people joined hands and slowly circled the statue.

CBC News reporters on the scene estimated there were about 150 people at the gathering.

Cornwallis, a governor of Nova Scotia, was a military officer who founded Halifax for the British in 1749. The same year, he issued the so-called scalping proclamation, offering a cash bounty to anyone who killed a Mi’kmaq person.

He said the veil was a temporary measure and that it will be removed sometime after the demonstration, though he did not give details on the time frame.

“We said we’d leave it up for [Saturday’s] ceremony,” he said. “I don’t know that there’s a rush to take it down, but it will come down.”

Within hours of the ceremony, the black cloth was gone. In its place, an orange tarp partially obscured the statue.

One of the organizers of the event, Elizabeth Marshall, of Eskasoni First Nation in Cape Breton, N.S., said it was moving to see the support from the crowd and the municipality.

“This had to be one of the most joyous days I’ve experienced in a long, long time,” she said. “I never anticipated we would start a new relationship with the settler peoples because we’ve always been excluded from everything.”

She said it felt like “a rebirth of our people who felt oppressed and who felt they were voiceless. Today they had a voice.”

Organizers had hoped the plan to remove the statue would prompt the city to pledge to do so itself by Natal Day on Aug. 7. But Savage said in a statement earlier this week that a process is already in place to discuss the issue and that the removal of the statue on Saturday could “set back progress.”

Committee to begin work in September

Halifax regional council voted 15-1 in April to establish a panel to make recommendations on how to grapple with municipal infrastructure named after Cornwallis.

Savage said on Saturday that the committee members, which will include Mi’kmaq people, will likely be in place by September. A timeline for recommendations and decisions will be determined by the committee, he said.

Savage stopped short of saying he wants the statue to come down, but he called it an “obvious impediment” to reconciliation.

“I want to resolve the situation,” he said. “I don’t think the status quo is good.”

‘It brings back pain’

Patrick LeBlanc, an Indigenous man from Digby, N.S., said the statue is a painful reminder of the oppression of First Nations people in Canada.

“This gentleman here represented a genocide for our people,” LeBlanc said. “And to see it every day, it just brings back memories and it also brings back pain.”

LeBlanc said simply covering the statue isn’t enough. He would like to see it replaced with something that will give restitution and healing.

“I think some people should open their eyes and listen to people who are just making a humble request that this offensive and disgraceful homage to colonial history is removed,” he said.

A small number of people who attended the event appeared to hold dissenting opinions of Cornwallis, as at least one man began shouting at the protesters and another showed up with a U.K. flag.

Halifax Regional Police said Saturday morning that officers would be on the scene to ensure a peaceful demonstration can take place.

It’s unclear how activists planned to take the statue down. It stands on a stone pedestal about two and a half to three metres off the ground.

Site of protests in past

The statue has been altered by protesters in the past. In 2016, someone splattered red paint across the statue and the pedestal.

The site was also the scene of an Indigenous protest on Canada Day in which a woman shaved her head and placed her two braids at the foot of the statue. The woman said she wanted her action to bring attention to issues including Canada’s treatment of Indigenous people and the environment.

At that protest, members of the group Proud Boys showed up and told the gathering that they were “disrespecting General Cornwallis.”