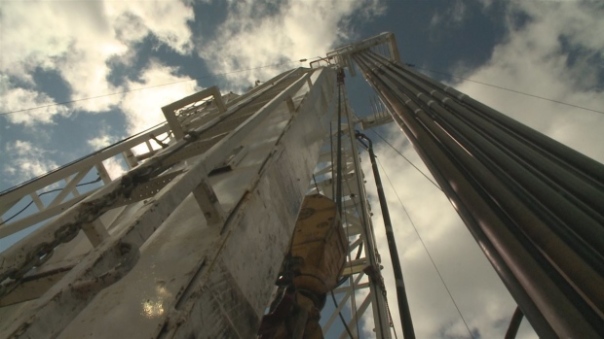 Junex has several wells at its Galt site, located in the Gaspé. (Radio-Canada)

Under mounting pressure from First Nations leaders and environmental activists, an oil exploration company has agreed to temporarily halt drilling activities at their site in the Gaspésie and hold consultations with the surrounding M’ikmaq communities.

The decision from Junex, the company behind the oil exploration, means that there will be no drilling activities for the rest of the year at the Galt #4 well, located between the city of Gaspé and the town of Murdochville.

It is being hailed as a step in the right direction by the three chiefs from the Mi’kmaq First Nations of Gespeg, Listuguj and Gesgapegiag, who have repeatedly called on Junex and the provincial government to initiate discussions about drilling on their ancestral territory.

“This is important to us because it is only with dialogue that things will get better,” said Gray. “All three Mi’kmaq communities will work together under a common voice.”

The consultations and suspension of drilling will last four months, beginning in September.

While Gray said he recently noticed a change in attitude from Junex — which had maintained that the oil project was consensual and to the benefit of the community — he didn’t link the announcement to recent protests and an occupation of the oil exploration site. 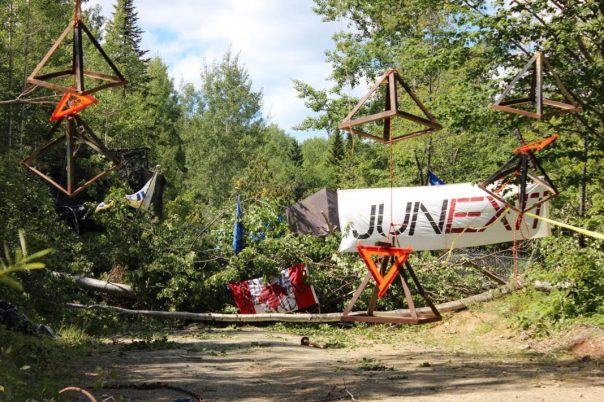 Blockade against Junex in August, 2017.

In August, frustrated environmental activists blocked access to the #4 Galt well for days by erecting a barrier on the access road and demanding an end to drilling activities on the land.

The occupation ended with two arrests after provincial police raided the makeshift camp and dismantled the blockade on Aug. 14.

Junex announced after the police intervention that it would proceed with drilling — leading activists to set up a camp along the riverbed to continue protesting and Mi’kmaq chiefs also called for a halt to the oil project.

“We’re very happy that they joined us and asked for a work stoppage,” said Pascal Bergeron, spokesperson for Environnement Vert Plus.

The company changed its tune late this week, saying in statement that maintaining relations with First Nations communities is part of its corporate policy.

While Mi’kmaq chiefs and environmental activists have welcomed the decision, the camp set up by the group of activists will remain for now.

“We’ve won time for us to get people engaged and demand for a full halt,” said Bergeron. “It’s a good delay that we’ve just won.”