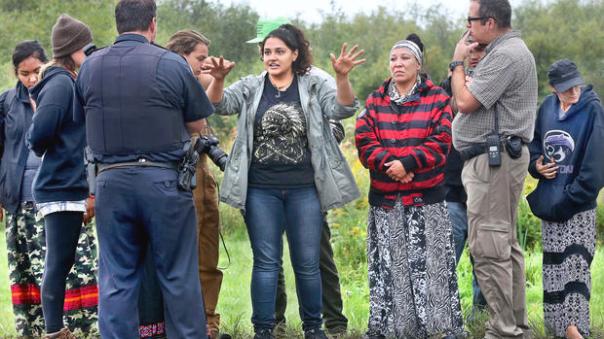 SUPERIOR, Wis. — Five people were arrested during protests Thursday, Sept. 14, after blocking entrances at an Enbridge pipeline contractor in Superior.

It was the sixth “lockdown” protest in roughly three weeks by people identifying themselves as water protectors, and the first one inside the city limits.

The protesters against the Line 3 project locked themselves to their vehicles and attempted to block two gates outside the entrances to the Michels Corp. facility on Stinson Avenue. Authorities arrived en masse and, after hours of negotiation, ended up cutting through the locking devices used by protesters.

“We tried to first negotiate,” said Assistant Superior Police Chief Matt Markon. “As a last resort we had to get them out of the positions they’d put themselves in.”

The protesters were arrested on misdemeanor charges ranging from trespassing and resisting arrest to disorderly conduct — including one woman who Markon said elevated the protest by using loud profanity. They remained in the Douglas County Jail as of Thursday afternoon.

The protest started shortly after 6 a.m., and lasted deep into the morning. Protesters said they arrived intending to stop workers from getting to the construction sites spread across parts of Douglas County between Superior and the Wisconsin-Minnesota state line.

The action featured a dozen protesters and even more police. Some intermingled, creating dialogue between the sides which was ongoing across the busy street from the two occupied entrances. Police directed traffic, and contractors draped a black tarp over one part of the site, where Markon confirmed a man had locked himself to the bumper and hitch assembly of his van with an instrument Markon called an “iron maiden.” At the other entrance, two men locked an arm each to one another using chicken wire, tape and more and wouldn’t leave the inside of their locked car — its windows steamed over with their breath. 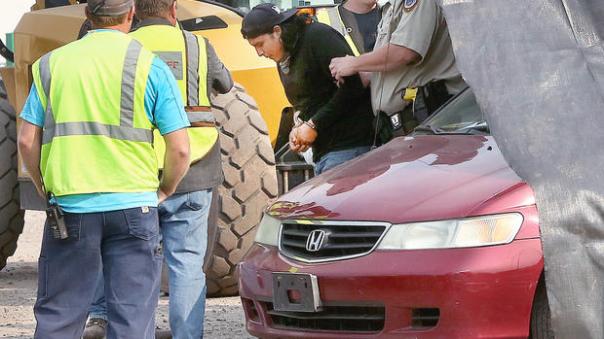 One of the water protectors who locked down to machinery being arrested by police.

Enbridge spokeswoman Jennifer Smith arrived and explained that workers were on the site before dawn for a safety meeting and were met upon their departure for work by the blocked exits. Workers eventually drove around the blockades. She said workers endure long and hard days, and wished the protesters would accept the company’s offer to talk rather than delay work.

“We have offered to engage respectfully,” said Smith, who called the pipeline project safety-and-maintenance driven, and described the repeated protests as events that “put everyone’s safety at risk.”

The protests marked the third round of arrests since Enbridge decided in late August it would go forward in pursuit of trespassing charges against protesters who interfere with pipeline work. A female protester was taken off the site immediately on Thursday for having been previously arrested and ordered by a judge to stay away from Enbridge worksites, Markon said.

Enbridge is constructing a new pipeline to replace the existing 50-year-old Line 3 that crosses northern Minnesota on its route from Alberta to Superior. The replacement is currently under construction in Canada and Wisconsin, and awaiting the outcome of a review process in Minnesota.

Line 3 approval in the state was dealt a blow earlier this week when the Minnesota Department of Commerce concluded in testimony that the state does not need another Line 3.

The news was of little solace to Stuart Perkins, of the Red Lake Band of Chippewa. He was among multiple people filming live video streams of the protests for transmission on the internet.

“It’s not a victory,” Perkins said of the commerce testimony, adding the 2016 Standing Rock protest against the Dakota Access pipeline featured its share of ultimately hollow victories for the opposition. “It’s disguised as a victory.”

He said the Line 3 protest group came from the Makwa Camp outside Cloquet. Makwa means “bear,” and Perkins called it the front line for Line 3 opposition. It employed its first lockdown on Aug. 21. He said water protectors from the camp would continue to apply pressure regardless of the ongoing legal outcomes.

Protesters this time came from as far away as St. Louis.

Protesters were cut out of their bonds by the Douglas County Sheriff’s Office, which used a grinder and could be overheard cutting through metal to free the one protester who was behind the black tarp. The burning smell of the grinder radiated across the street.

SapaWin called the locked-on protester “a warrior,” an agent for hope and her boyfriend.

“He’s here to protect our water,” she said.

Protesters called for an end to fossil fuels and a full turn toward renewable energy sources. They said pipelines disrupt the wetlands, wildlife, natural medicines and more.

“He’s made his point,” Markon said of the protester behind the tarp, who was finally escorted deeper inside the contractor’s fenced yard before he was taken away.