The former national chief of the Congress of Aboriginal Peoples (CAP), an organization created to represent the interests of off-reserve Indigenous peoples has set up a camp protest camp by its Ottawa head office vowing to remain until the current leader resigns.

Kevin Daniels, set up a tee pee in the parking lot of the organizations office building on Sunday evening.

Daniels said he also now on a liquids-only fast as part of the protest.

“(CAP) has been overrun by non-Indigenous peoples who think they know what’s best for us,” said Daniels. “Now we have a non-Indigenous Liberal taking over of our organization.” 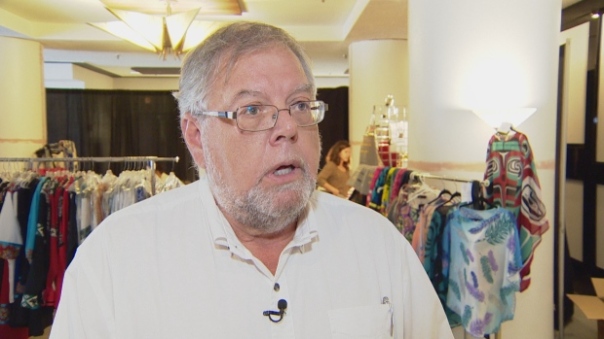 In an interview with APTN last week, Bertrand said he couldn’t remember the exact nature of his Indigenous roots.

Bertrand, a former Liberal MP, said the ancestors of his ancestors were Algonquin who came from somewhere in the Oka, Que., region.

Daniels also said he wants CAP to turn over its Eagle Staff which he said has been “tainted.”

“I am a political refugee in my own country. I have no land, I am homeless,” said Daniels. “We have been fighting for everybody else’s rights but now we are going to start fighting for our rights, our homeland.

“This is just a first step.”

He was eventually detained by Ottawa police who handed him over to Gatineau, Que., police on an outstanding warrant.

Daniels was the one who brought the Eagle Staff to CAP.

His uncles were Harry Daniels and Jim Sinclair, the founders of the organization. Harry Daniels began a court case that ended up before the Supreme Court of Canada which ruled that Ottawa has a fiduciary for non-status Indians and Metis peoples.

Daniels said he is also concerned about the $119,000 CAP received from the Nuclear Waste Management Organization (NWMO).

He said CAP has never really explained what the money is for.

During CAP’s annual general meeting some delegates tried and failed to push through a resolution calling for the organization to sever its ties to NWMO.

Daniels said he won’t leave the tee pee at CAP’s offices until Bertrand resigns and the Eagle Staff is returned.

“I will be here until the issues of off-reserve Indigenous peoples are discussed,” said Daniels, who is supported by Mitch Jocko from Akwesasne.

“This organization belongs to off reserve Indian peoples.”

Jocko said he is backing Daniels because Daniels backed the Jocko family in the 1990s when Akwesasne was caught in internal and external strife over casinos, the tobacco trade and the Oka Crisis.

“He was protecting my family’s interest and my interests when I was 12 and 13-years-old for no personal gain,” said Jocko. “With that karma that went into existence, I am here today. I am backing him.”

Daniels, whose warrior codename is Kadahfi, was part of the second wave of Mohawk warriors that entered Kanesatake after the Oka Crisis in 1990 when the Mohawk community was facing continued police pressure.

Daniels was CAP national chief in 2009. He took over the role in the interim after Sen. Patrick Brazeau left the post to sit in the Senate.

Brazeau said in a recent interview with APTN he attended CAP’s annual general meeting and many delegates had questions about Bertrand’s Indigenous ancestry.

In an interview at CAP’s Ottawa headquarters last Wednesday, Bertrand was initially vague on his ancestry and then said he couldn’t “remember” when pressed on the issue.

“I am, in my opinion, I am Metis from the Quebec side,” said Bertrand. “I have Indian blood. My ancestors were from Algonquin descent. I don’t see the relevance of it.”

Bertrand said he met the criteria set out by the Native Alliance of Quebec and eventually became its leader. However, he couldn’t describe the criteria or explain how he met it.

“I met the criteria at (the Native Alliance of Quebec) and you know, I don’t understand what the big problem is,” he said.

The Native Alliance of Quebec membership form accepts a family tree, certified by a genealogist, as proof of Indigenous ancestry.

Bertrand was president of the alliance from 2011 to 2016. H was elected national chief of CAP in September 2016.

Bertrand was a Liberal MP from 1993 to 2004 for the Pontiac-Gatineau-Labelle riding in Quebec. He was also a member of the Aboriginal affairs committee from 1996 to 1997 and he served as Parliamentary Secretary for Defence from 1998 to 2000.