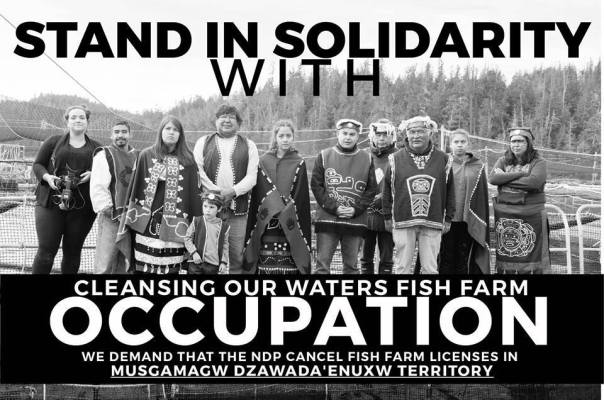 Musgamagw Dzawada’enuxw Cleansing Our Waters, October 23, 2017
Press Release
First Nations Assert Food Fishing Rights In Area of Fish Farm Restocking Several food-fishing gillnet boats operated by ‘Namgis and Musgamagw Dzawada’enuxw fishermen in Knight Inlet were approached on Friday evening by a salmon smolt restocking vessel, the Orca Chief, operated by the Norwegian-owned company Marine Harvest, on its way to restock the Port Elizabeth fish farm, owned by the same company.
After a brief radio exchange with the fishermen at 8:00 pm, the Orca Chief turned around, waited in a nearby passage, then returned to stock the farm around 1:00 am after the fishing was completed. Radio recording indicates that at 7:59 pm the fishermen made a call over the VHF marine emergency channel 16: “Vessel coming into Port Elizabeth, do you see the fishing nets in front of you?” The Orca Chief responded 7:59 pm: “Yep. I take it this is a blockade then?” The fishermen responded at 8:00 pm: “Just trying to catch some food fish.”
K’odi Nelson, Musgamagw Hereditary Leader and fisherman, issued the following statement: “We are simply exercising our indigenous right to fish to feed our families through the winter. This year has seen historic low returns of salmon. Collecting enough food for our communities is becoming harder due to the impacts these fish farms are having on our wild salmon. We now have hard evidence of lethal levels of sea-lice found on juvenile wild salmon exposed to fish farms, dead-zones beneath the farms, wild juvenile herring trapped in the farms, as well as dangerous viruses released from the farms. The provincial tenure for the Port Elizabeth salmon farm expires in eight months, at least twelve months before these smolts will be ready for harvest. This farm has never had permission from our Nations to operate in these waters. The Premier and Agriculture Minister have also made clear the leases may not to be renewed. As fishermen, we will continue to exercise our rights to food fish in our waters, and if that overlaps with the restocking operations of fish farms, perhaps it is time to consider who is interfering with whose fishery, and with whose future?”
BACKGROUND:
Lana Popham, BC Minister of Agriculture, sent a letter to Marine Harvest on October 13, affirming her government’s commitment to the United Nations Declaration of the Rights of Indigenous Peoples (UNDRIP), and informing the company that their tenures may not be renewed. (link: https://tinyurl.com/yb694doc)
Premier John Horgan and a number of Provincial ministers travelled to Alert Bay on October 10 to attend a meeting with over forty Hereditary Chiefs from eight First Nations, who are united together against the fish farm operations. Premier Horgan spoke to a salmon farm industry meeting on October 18, where he stated, “Tenures are for a fixed term. They’re not in perpetuity, and I’m sure Marine Harvest understands that“. (link: https://tinyurl.com/ybrdw9zy)
Media contactK’odi Nelson, Musgamagw Hereditary Leader
250 974 3822
Link to photos: https://tinyurl.com/yckrobqn