‘It means a lot to me’: 1 year later, tiny homes in this B.C. community are making a big difference 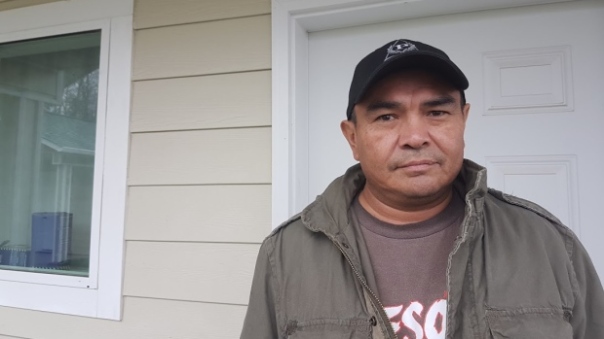 Since moving into his first home, Lance Alexander has gotten a job at a nearby mine and is living what he calls “the clean life.” (Andrew Kurjata/CBC)

A small house has made a big difference for Lance Alexander.

“Got a stove and a fridge, little table and futon,” Alexander said, pointing around the 320-square-foot space.

Since moving in last year, Alexander has started working at a nearby mine and is living what he calls “the clean life.”

“[I] used to drink lots before,” he said. “Just surfing couch to couch… now I’ve got my own place, I can just lay on my own couch.”

It’s exactly the sort of transformation Aileen Prince, the former capital housing and lands manager for the Nak’azdli Whut’en First Nation in north-central B.C., envisioned after seeing a TV show about tiny houses.

She wondered if the homes could help solve a major problem facing First Nations across the country: homelessness.

One year after Prince helped build four of the tiny homes in her community as part of a pilot program to test her theory, residents say they have made a big difference.

Alexander said having a place of his own helped transform his life.

“It means a lot to me,” he explained. “I got to take care of the house … just keep away from all the bad people and whatnot.”

Each tiny house is just 320 square feet but contains a washroom and a stacking washer and dryer set. They are heated by electricity. (Andrew Kurjata/CBC)

The community is now looking to build two more of the tiny homes, and the program has attracted interest from other nations.

After the first four were built, Prince took applications from people within the community to move in. One requirement was they could not have previously owned a home or rental unit.

“We didn’t know what to expect. We just thought, you know, they don’t deserve to be treated like this,” Prince said.

The band holds the mortgage to the homes; tenants pay $320 per month plus heat, hydro and maintenance. Eventually, the $50,000 houses will be paid off and tenants become owners.

“Giving people a hand up instead of a hand-out,” housing manager Sheila Caswell said, adding no one in the pilot has missed a payment.

The latest census figures show substandard housing on reserves is a growing problem and rates of Indigenous homelessness are described as “dire.”

Prince is now retired, but her successors in the Nak’azdli Housing Department believe her idea can go a long way towards tackling the issue.

“We have a lot of single people who, really, it’s not worth their while to own or aspire to own a full-size home,” explained lands manager George Ho Lem.

“So the tiny homes seem to fit with the types of needs a good portion of our members would have.”

But the four homes are just one small step towards solving a much bigger problem.

Caswell estimates there are 60 people looking for a single-occupancy unit in the community of around 2,000, where space is in short supply.

These days, Alexander often stays in a camp when he’s away at work. His brother looks after his tiny home while he’s gone.

“I give him my keys and tell him to come watch my place… he’s just looking for a job, and maybe he’ll get a house, I hope.”

Alexander said after he pays the band back, he plans to sell and upgrade to something bigger.

What will he do with the extra space?

“Put more stuff in there,” he laughed.