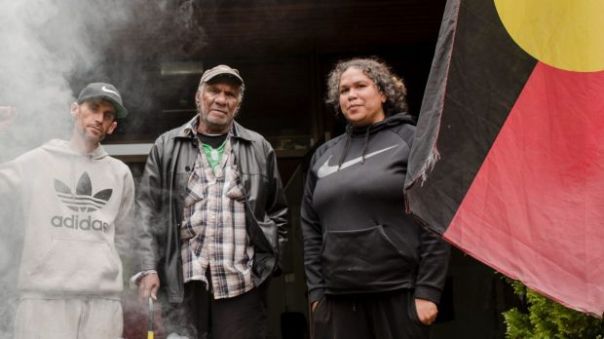 It’s hosted Canberra’s prime ministers, diplomats and brides but now the iconic Lobby restaurant is home to a quiet occupation.

Nioka Coe, a Ngunnawal person, joined forces on Sunday with the Aboriginal Tent Embassy to “reclaim” the restaurant in an act of sovereignty.

The group issued the National Capital Authority, which owns the historic site, with an eviction notice, citing its “failure to seek permission … or sign a treaty or lease the land from Ngunnawal traditional custodians” as the reason for the takeover.

Working alongside the Ngunnawal elders, the group says it hopes to turn the site overlooking the Rose Gardens of Old Parliament House into a cultural centre or a cafe run by the tent embassy.

“There’s a conversation that needs to happen in this country around Aboriginal people and treaty,” Ms Coe said.

“The government needs to be aware, we ain’t going nowhere, we’re part of this country and its future as well.” 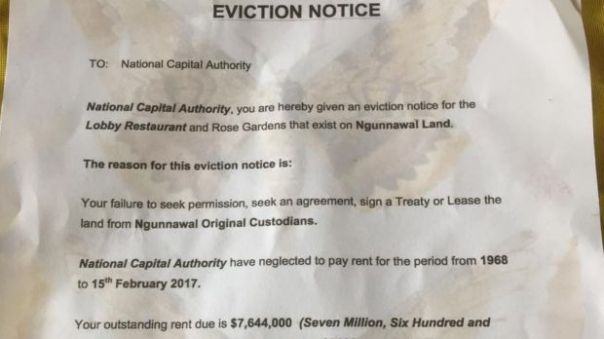 The eviction notice issued to the NCA at the Lobby Restaurant. Photo: Supplied

The takeover comes after a gathering of indigenous nations at the tent embassy on Sunday. Last month, Prime Minister Malcolm Turnbull scrapped plans for a referendum to establish a new Indigenous advisory body and talks around constitutional recognition for Indigenous Australians remain largely stalled.

On Monday, furniture, books and food donated by the community were arriving at the restaurant by the carload. Uncle Kevin, an Arabunna elder who passes through Canberra regularly, offered up some fresh damper made by “one of our mob” as the group settled in.

At least 30 people are involved in the occupation and more are “on their way”, Uncle Kevin said.

The occupants are also calling for more than $7 million in rent on the site to be back-paid – at a rate of $3000 a week for the next 49 years.

The Lobby restaurant, which is heritage-listed, closed suddenly in December last year after a long-running stoush between its former owner and the National Capital Authority and has sat empty since.

An authority spokeswoman denied suggestions the site was to be demolished.

“[We] are working with authorities to ensure a satisfactory outcome for all parties,” she said.

It is understood the authority, along with police and Ngunnawal elders, will meet at the tent embassy fire on Wednesday to discuss the occupation.

Ms Coe said the group was hoping electricity and water would be turned back on in the building as a result of those talks.

With the Melbourne Cup on Tuesday, Uncle Kevin said he was mostly hoping someone might donate a television so they could watch “the big race” together.

On Australia Day 2012, the restaurant also famously became the centre of Aboriginal protest as activists from the tent embassy converged on the site to voice their anger at comments made by the then opposition leader Tony Abbott. 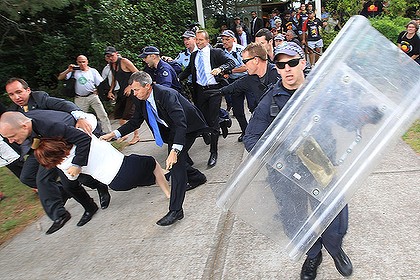 Both Mr Abbott and the prime minister of the time, Julia Gillard, had to be bundled to safety by security.

The restaurant originally opened almost five decades ago, and in recent years had became a popular spot for weddings and functions.

Canberra’s tent embassy was set up across the lawn from the restaurant by four Aboriginal activists in 1972 to demand land rights and its fire has been burning ever since.

ACT Policing confirmed they attended the occupation on Sunday but said officers were no longer at the scene.